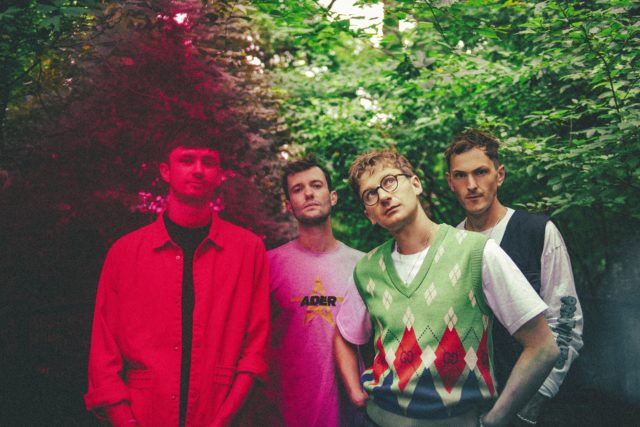 Songwriters often refer to their songs as their “babies.” In the case of Glass Animals singer Dave Bayley, he can say his group’s latest album, Dreamland, was literally born at a hospital.

The year was 2018, and Bayley was at the hospital because Glass Animals drummer Joe Seaward had been critically injured when, while riding a bike, he was struck by a truck. The crash left him with a broken leg, and even worse, a complex skull fracture that caused some bruising on his brain. The band’s songwriter, Bayley, wanted to be at his drummer’s side as he went through a pair of lengthy surgeries and then recovery. This created lots of idle hours.

“Hospitals are funny places. There’s kind of a weird personal lockdown,” Bayley says in a recent phone interview. “You’re not going out, just sitting there waiting for news day after day after day after day after day. You’re kind of weak, you’re tired, there’s adrenaline going, the future is really uncertain and your brain, when you’re not out creating the new memories, your brain is going back into the old ones and reliving them.

“I hadn’t really thought about them in a very long time,” he says. “I just started writing all of those things down and that’s what turned into the record.”

Bayley and his bandmates (Ed Irwin-Singer and Drew MacFarlane) didn’t know at first if Seaward would recover from his head injuries—for a time he couldn’t walk, talk, read or write—much less if he would regain the physical dexterity to again play drums. The future of Glass Animals—whose first album, 2014’s Zaba, topped 100,000 copies sold, while 2016’s How to be a Human Being cracked the top 20 on the Billboard album chart, and 2020’s Dreamland reached No. 7 on that chart—was very much in question.

But Seaward worked diligently to recover from his surgeries, and, in time, began to regain his physical capabilities. Shortly before the pandemic hit, he was able to play a few Glass Animals shows.

“I think miraculous is the only word for it, really,” Bayley says of Seaward’s recovery. “But if anyone was going to do this, it was him. He’s the most stubborn, determined person I know, and that drive, I think, is ultimately what got him to where he is now.”

And now, some three years later, Glass Animals have the songs from Dreamland to play, thanks to Bayley’s downtime in the hospital, and more significantly, a shift in his thinking about the kinds of songs he is able to write.

Dreamland represents the first full set of autobiographical songs Bayley has written for the band. A couple of experiences helped Bayley embrace the notion that he could write about himself and be honest and even vulnerable about what he revealed.

One was the opportunity to write songs for other musicians.

“When you write new songs for other people you can write really personal things because, again, there’s that one step of removal. You’re not singing it,” Bayley explains.

The other factor was the song “Agnes” from How to Be a Human Being, in which Bayley shared his feelings about a friend who fell into addiction, which received a strong response from fans.

“That reaction was another thing that gave me a bit more confidence to write something personal,” Bayley says.

Bayley’s new approach to songwriting resulted in an album in which each song was inspired by certain memories from his life. “Tangerine” looks back at a friend who has become unrecognizable over the years. “It’s All So Incredibly Loud” takes stock of the fact that growing up means experiencing good and bad times, and while no childhood is perfect, the experiences are part of what makes you who you are. The most startling song is “Domestic Bliss,” in which Bayley shares the confusion and fear he felt as a very young boy toward the abusive father of a childhood friend.

Musically, Dreamland is every bit as ambitious as the first two Glass Animals albums, as Bayley blends genres and weaves together myriad synthetic tones to create a kaleidoscope of sounds, from warm, sweet, and perky songs (“Tangerine,” “Heat Waves” and the title track) to futuristic, spaced-out, hip-hop flavored cuts such as “Your Love (Déjà Vu),” “Space Ghost Coast to Coast,” and “Tokyo Drifting.”

Now with a winter U.S. tour starting, Glass Animals have seen the song “Heat Wave” complete the longest-ever climb into the top five on Billboard’s Hot 100 singles chart, reaching No. 3 on its 51st week, while also being named Billboard’s top rock act of 2021. Bayley said the band will not try to recreate all of the sounds and textures of the songs on stage, whether they’re new or old, which should make for some musical surprises for fans.

“There are only so many sounds four people can play on stage. We’ve always kind of kept that as a requirement,” Bayley says. “We have to be able to make all the noise ourselves. I guess it’s just choosing your favorite bits. You kind of learn that as the tour goes on.”