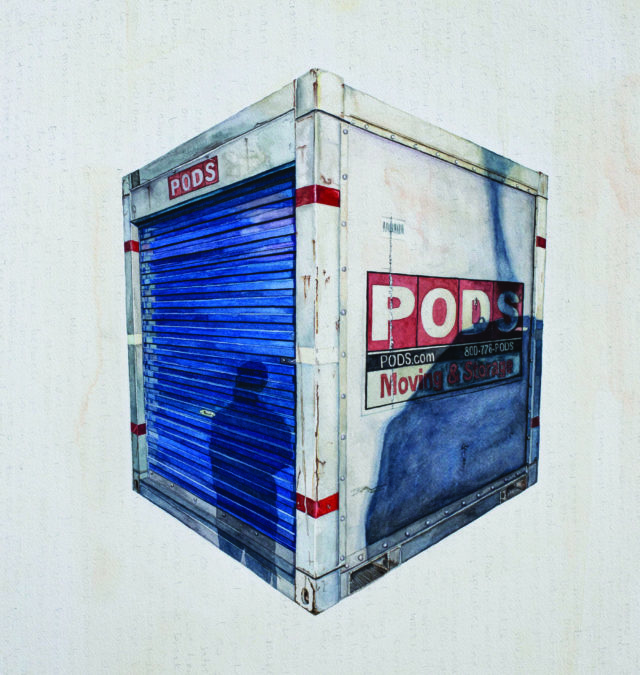 A tall, white canvas leans against the wall in Clara Nulty’s painting studio.It looks nearly blank, but there’s a pattern of dots, not unlike a cribbage board. At the bottom, a white pantyliner is stained red with period blood. On closer inspection, the holes of the canvas match the pattern on the pantyliner. The work is a palimpsest, painted in layers, on layers of paper and canvas—often layered with meaning.

The piece was Nulty’s way of addressing anxieties about motherhood and infertility.

“To me, this painting is deeply anxious. If I want to be pregnant, getting my period is a bad thing,” she says. “But when people came into my studio, seeing it brought out a deep sense of relief.”

In a way, other people’s reactions serve to recontextualize the work for her, she says, adding another layer.

A palimpsest, according to Merriam-Webster, is a writing material used one or more times after earlier writing has been erased. Historically, vellum or parchment would be scraped and washed to be salvaged and reused. Merriam-Webster’s second definition of the word reads, “something having usually diverse layers or aspects apparent beneath the surface.”

“I feel like (palimpsest) is a good catch-all term for what my work is right now,” Nulty says. “This kind of layering, obfuscating, revealing and creating a very specific focal point over the layered ground of previous thoughts and moments in my life.”

For Nulty, the word is both literal and metaphorical. Literally, she papers her canvas as part of the grounding process, painting over them before the rest of the art begins to appear. Working primarily in water-based paints and washes, which are typically painted on flat surfaces, Nulty’s layered grounding process adds texture under what would typically be a smoother medium.

The metaphor comes in the form of narrative and memory, with Nulty’s paintings froming a subject photo and often an associated memory. Though the paintings are shown without context, the layers of inspiration still exist. Building on the grounds of the metaphor, Nulty often uses postcards and personal documents when papering and grounding the canvas.
Layered atop palimpsest literal and metaphorical, Nulty’s work highlights things mundane and often overlooked—a pantyliner, an electrical outlet, a shipping pod, or the door of a house.

But not just any door: the door to her sister’s house in Denver.

“It’s a door I know very well. It feels like a very touched door. It’s used and it has life experience even as an inanimate object,” Nulty says.

Textured canvas lends to the details in the paint of the door and the frame, the siding of the house and the stone work built up from the foundation. The cracks in the paint show that life experience, along with the shadows, wood grain and hewn stone. The precision and detail are elevated by the lightness of watercolor and the muted tones.

She strives for detailed representation, often presented on canvas with more negative space than subject. Using textured grounds and pastes on the canvas was in service of covering up details in personal documents, she explains.

The choice to work in watercolor isn’t without challenge. Watercolor dries quickly, and the loose liquid moves with a will of its own.

“With watercolor, you’re really building a relationship,” she explains. “Watercolor can be really frustrating for people because it’s just loose, it moves and does its thing. You have to learn a partnership with it to get a certain level of detail.”

Nulty admits a fraction of jealousy that oil and acrylic painters have an easier time wiping a canvas clean when they’re unhappy with a work. That has, in part, contributed to the nature of her palimpsests, she says.

The subjects—like her sister’s door—are often old and worn, Nutly says. Capturing these subjects with accurate detail is the crux of her practice. One painting in her studio captures water moving under a concrete overpass. The space under the bridge and the water itself is an empty square, but the completeness of the work is evocative. One can almost smell the mustiness under the bridge, feel the crumbling stone and flaking paint under the fingertips.

“Painting, to me, is almost like an archaeological experience. It’s a still point in time where you’ve captured something. It’s going to become something that references a specific time or moment,” she says. “I think my work is fairly personal, so I’m not sure how broadly that translates, but I think a lot of people can project their own moments.”

Making art is part of Nulty’s family history—a personal palimpsest—but she humbly refutes being any sort of child prodigy.

“To me, art is such a basic pathway to communication, especially painting and drawing—the urge to make images is a really basic human instinct,” Nulty says. “So I think most kids have an impulse to make marks on something and it usually means something to them, even if it’s hard to see from the outside. I don’t think I was anything special in that regard.”

Still, her father draws and paints with watercolors, she says. Making art was totally normal and routine in her home, but a youthful perfectionist streak nearly took her off that creative path. In middle school, Nulty felt self-conscious and discouraged by her own perceived lack of progress, so she stopped trying for a while.

“I assumed I just wasn’t that good at it. I’ve always been interested in making something representational, and having that thing be descriptive and accurate on some level,” she explains. “Those were hard years to be wired that way, and especially learning to draw, nothing comes out the way you want it.”

Nulty’s mother encouraged her to take art foundation classes in high school, she says, and that teacher encouraged her further. She jokingly calls herself a studio rat, always going to the art room after school to finish a drawing or painting. It was there she discovered the joyous feeling of getting addicted to a piece and working it to a conclusion. The drive would carry her through her master’s in fine arts, further honing her practice.

“I think the thing I’m always the most excited about in my studio is the thing I haven’t started yet,” she says.
Palimpsest opens at the Firehouse Art Gallery on July 15.