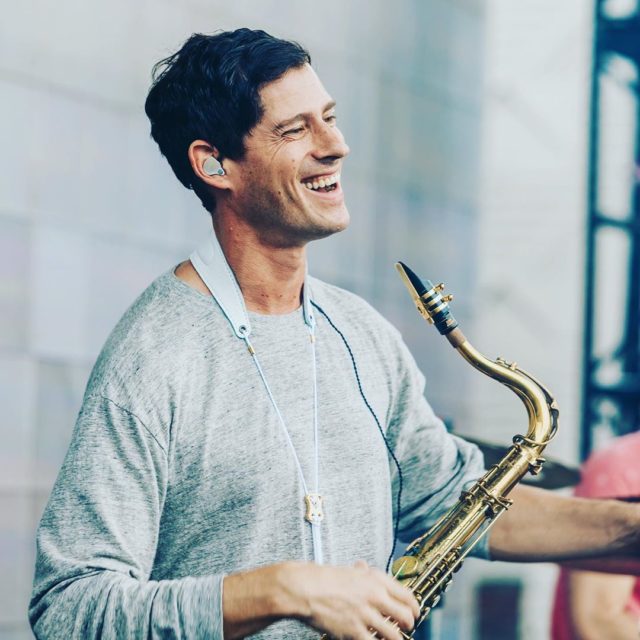 I’m keeping… pretty busy these days,” Dom Lalli says, anticipating the question of what a performing artist is doing while the Nasty Little Germ continues to pinball its way through everybody’s life and keep most performers mostly at home, mostly not performing.

“Not anything I’m getting paid to do or anything like that, just stuff for later.”

When the world comes back.

At the very least it’s been an opportunity, perhaps unwelcome in its abruptness, for all of us to rummage through the closet, rifle through the stuff and tie up some dangling threads. For Lalli, that meant the free time to finally mix down and release A Blind Man’s Blue, a quintet jazz album he cut with Eric Gunnison (piano), Bijoux Barbosa (bass), Rudy Royston (drums) and Greg Gisbert (trumpet) 10 years ago. Lalli’s roots (and education) are solidly in jazz, so the exercise was more than simply unearthing and releasing some pre-BG genre tease. This is exactly who Lalli was, and is.

“So kind of at the same time I was starting Big G and getting that going, I was working on this record,” Lalli says. “And I didn’t quite finish it; the tracks got mixed a little bit and we all took a mix home with us, and that’s kind of where it stood.

“And then everything started happening with Big G, and I just wanted to focus all my energy on it. And I knew that there’d be another time to put this record out, so I didn’t feel like there was a rush to do it.

“I spent every ounce of energy the last 10 years on Big Gigantic, like every waking minute. And lo and behold, this pandemic hit, our tour got canceled (we had just put out a new album), and the first thing I thought was, I gotta finish this and put [A Blind Man’s Blue] out.”

Balanced between Lalli originals, a few extending back to his grad school days, and a handful of covers (like George Gershwin’s “Love Walked In,” Miles Davis’ “Joshua”), the album features Lalli’s quintet ranging from lithe, thoughtful ballads, to propulsive, gnarled melodic workouts to plaster-peeling blowfests. There’s an unavoidable tinge of regret listening to these cuts; this is clearly a performance outfit at work, no chamber-jazz arch or pretense here. This is music that begs for a room and an audience.

Lalli’s sax work in particular, although generously featured in Big G’s genre-flattening electronic safaris, reveals itself in full bloom in this work. Chops aplenty, but the real joy is Lalli’s fierce dedication to melody and speaking in prose, rather than simply in riffs or gestures or modal shades. “Bluebird” and “Emerald Isles” especially benefit from this. Lalli learned the lesson well that every sax player is schooled in, and some forget, that jazz is fundamentally rooted in song, and if this album doesn’t explicitly resonate as a tribute to the golden years of jazz, his compositions reflect a player who still adheres to its essentials.

“Y’know, I love songwriting,” Lalli says. “Like, more than I love improvising. I mean, I love both a lot, but I feel like songwriting is really my thing. With this stuff, and even with the Big G stuff, I really want to take a journey, kind of build a story. Destinations. Kind of like, you’re on a journey and you get to a place. The song’s about being somewhere, and getting to somewhere else.”

Worthy of note are his fellow players — Eric Gunnison, the longtime Denver-based pianist, provides predictably stout and damn-near perfect harmonic flooring, including some velvety Rhodes work, and saves up for a few blistering solos of his own. Trumpeter Gisbert likewise provides a sleek and engaged foil for Lalli’s sax, and the rhythm section of Royston and Barbosa frames the proceedings with measured, sometimes aggressive, sturdiness.

Ten years ago is long enough — our warped sense of time and tenuous grasp of Things That Happened Before The Pandemic make it seem like a quarter century ago, or another lifetime, or some half-remembered parallel world that pitilessly expelled us without warning. Did Lalli feel that distance as he was mixing and mastering this album?

“No, no. It feels very much like me, always. All my same stuff, all my same licks. It’s part of me, it’s part of my lineage, it’s something that I hold very close to me. Even times earlier than that, when I was in New York, and even when I was in Arizona doing my undergrad. Oddly enough, all those times seem very close. Even though some of them were a long time ago.”

Released on July 10, the album is getting some play on Spotify, a vinyl release is on its way, and Lalli says that another jazz project may be in its infancy as well… but he maintains that Big G is still a thing, their annual Rowdytown blowout gig at Red Rocks is on the books for 2021, and Lalli seems unconcerned that the festival machine has had to hit a yearlong pause button.

“For Big Gigantic, yeah, that’s been our culture, the whole festival world, and obviously it’s treated us so great. But that culture and those people, that’s deep. Those kids, when all this subsides, those kids are there, and we hear from them all the time. They hit us up: ‘Hey, we miss you guys’. I’ve been doing some DJ sets, doing stuff at home, and we’re still working on ways to bring shows to our fans.

“In all reality, people are listening more to us now. Our numbers are up. That’s why I’m currently planning for next year. New songs, new album, everything. Just getting everything ready for when all this is over.”