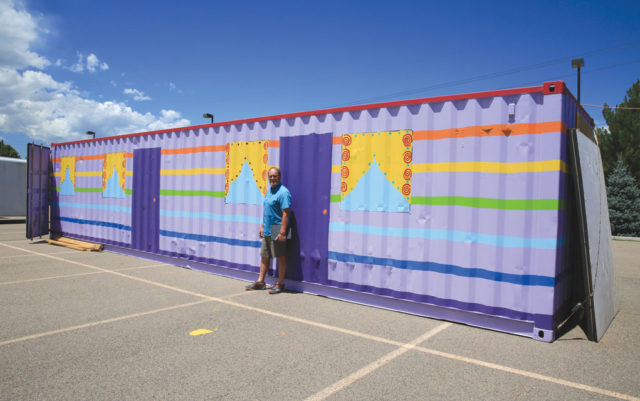 Bart Wear is in the construction business. He helps school groups, churches, businesses and other organizations turn shipping containers into classrooms, clinics, dental offices and other critical pieces of infrastructure for communities in need around the world.

But Wear, co-founder of Louisville’s Homes of Living Hope (HOLH), which helps foster these connections, doesn’t care how long it takes to finish projects.

“I never put a big emphasis on the time,” Wear says.

In fact, Wear says, the longer the better, sometimes. It’s an opportunity to engage more people in the process.

“A lot of times we’ll get these high schools and someone’s dad will say, ‘I’ve got a construction company, I’ll send over three guys and we can finish this in a couple days,’” Wear says. “I say, ‘Why don’t you send one guy over here and we’ll finish this is in a couple months, because the process is the point.’”

That process looks like this: an organization decides they want to outfit a container with resources with a community in need somewhere on the planet. HOLH provides a shipping container for the group to work on, encouraging participants to get as many people in the community involved, from putting up drywall to donating equipment or funding to putting in plumbing or electricity. Plans are designed, materials are sourced, work is done, and when the project is finished, HOLH ships the container.

That’s the formula the founders of HOLH settled on when the group launched in 2006. Co-founder Scott Kalevik had returned from a trip to Liberia, eager to help out the communities he met there. Together with Wear and Jack Heimbichner, the three grew the idea into a nonprofit that now serves communities around the world, and whose offerings represent more than just a material donation.

“Over time we changed our message from building facilities to connecting communities,” Wear says.

HOLH has helped students and volunteers at Louisville’s Monarch High School outfit and send a medical clinic to Mexico City. It’s helped those at Niwot High School turn a container into a school for kids in Uganda. Wear says HOLH has helped bring 20 critical structures to communities in need, but it’s the connection that’s fostered between two groups of people, often on opposite sides of the globe, that has the longest lasting impact.

“I get it takes money to do things; everybody asks for money,” Wear says of other charitable endeavors, “but we really believe that people being willing to give their time and their talent is worth far more than we can ever pay for. And then it creates a long-lasting connection.”

And the more people that can be involved in the process of creation, the better, Wear says.

“We try to engage 1,000 people in a project,” he says. “That’s not just construction but it’s soliciting goods to put in the containers and maybe helping raise funds or talking to civic groups or helping pay for shipping.”

Wear says it costs about $3,000 for the shipping container itself and another $3,000 (on average) to outfit it. The cost of shipping the container can range from $0 (a safe house in Lakewood) to $13,000 — the cost to send a container to Uganda.

Just like the effort and supplies it takes to build out the containers, funding comes from myriad sources — Wear says there have been projects where the largest donation was a couple hundred bucks.