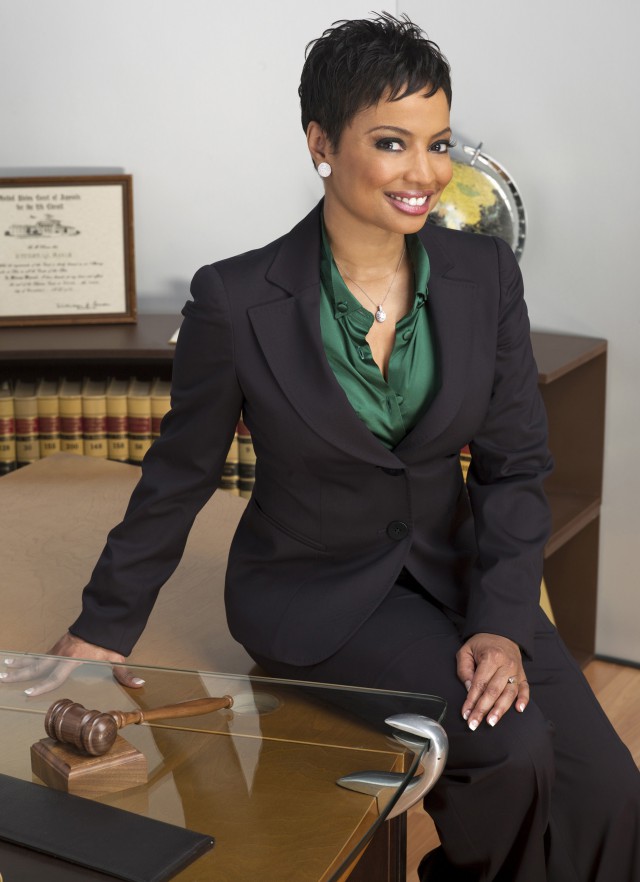 — She may be the presiding judge on the syndicated show “Divorce Court,” but had to pass more than the bar to get there.

She and her sister were expected to be doctors. “It
was never ‘if,’ it was ‘when’ you become a doctor. I didn’t know there
was an option other than that,” she says over coffee at a hotel
restaurant here.

“I went to because that was expected and that’s just how we did business. My sister went to
because that was expected. She’s a doctor. I remember the conversation
with my parents when I told them I wasn’t going to be a doctor. You
would’ve thought I shot the Pope. It was such a small price to pay for
a lifetime of I do what I want. It wasn’t a great vision on my part, I
knew nothing else,” she says.

In fact, she spent her years at
goofing off, quit one major in college and was about to leave another
when her dad reminded her that if she faded out of graduate school, so
did the money.

She grew up with a brilliant but bi-polar father
whose condition was worsened by his drinking and a mother who cleverly
managed his mental illness.

Toler’s dad was a lawyer, so after she quit pre-med,
she switched from English to the law. “The dumbest thing I ever did was
go to and learned nothing. I never went to class. I
was partying. I apologized to my parents because they paid for it. I
went there and did nothing. Later I studied for the bar and am a quick
study.”

“I was a very shy person and don’t like to argue,”
she says. “I thought, ‘What am I doing here?’ I was a great litigator
because I can convince people of things. But I was a terrible
negotiator. Don’t push and shove very well. I think I was a good judge
because I’m relatively intelligent, I’m people-smart, I can read people
fairly well, I knew the law and I gave a damn.”

Toler was 33, out of school when she went to work
for a law firm. “I was married, had a husband with four stepsons, I’d
just had a baby and was working 60 hours a week at a law firm and I was
about to blow my brains out,” she says.

“The judge in the city retired after 18 years and I
said, ‘The courthouse is 16 blocks from my house, judges set their own
schedule. That’s my job. I’m going to get that job.”

She went door-to-door with her 10 month-old son on her hip campaigning for the job in municipal court in .

“The guy I was running against had been a lawyer 12
years longer than I had been alive,” she laughs. “Everybody thought he
was going to get the job. Nobody knew me. I was just a kid. And I was a
black Republican. Who votes for a black Republican? And it was a
Democratic district.”

After three recounts Toler won by a measly three
votes. She spent eight years presiding over minor cases there. But she
found it disheartening. “I took work home with me. ‘Did I sentence him
right?’ ‘He’s going to get out, is he going to hurt her?’ My husband
started calling me the Night Stalker because I’d be up all night
walking around the hallways thinking. If you take your job seriously
you worry about that kind of thing.”

One day she found a while-you-were-out pink slip on
her desk. It was from 20th Television asking her to do a law show. “A
month later I had a job for ‘Power of Attorney.’ It didn’t last very
long. Then I was a retired judge working by assignment for five years
and then when the ‘Divorce Court ‘slot opened they called and said,
‘Can you come?’ I said, ‘Sure.'”

Toler’s never been divorced but admits even her
marriage has endured its tough times. “We came to a crossroads two
years ago, and I came into the marriage a frightened person. He came
into the marriage an angry person. I spent my whole marriage trying not
to have an argument. One day in the bathroom I decided I wasn’t giving
in. And it was 18 months of the rockiest road I’ve ever traveled,” she
sighs.

“And my mother came into town, looked at me and
said, ‘At the end of the day, Lynn, you’re too old for this (stuff).
You taught him he should always get his way. That was your doing. What
you need to do now is to re-educate him.’ She said, ‘He’s not happy’ …

“And she told me what to do. ‘Don’t get excited.
Don’t cry. Stand your ground. State your case. Respect his position but
respect your position.’ And we got through it.”

To commemorate the 150th anniversary of the beginning of the Civil War, is replaying marvelous series, “The Civil War,” every night this week. Burns recalls that talked about that film every night in his monologue the week it was
first shown in 1990. “People got married and buried to ‘Ashokan
Farewell,’ the haunting theme song written by my friend, ,” he recalls.

“Battlefield attendance at Civil War sites around
the country went up 200 to 300 percent … the Sullivan Ballou letter,
that was the highlight of the first episode, was copied and recopied
and handed around and read by people at funerals and at weddings and at
renewals of vows … and I think they were struck by the oceanic love
that that remarkable letter expressed.”

“The Civil War,” a monumental work that took Burns 5 1/2 years to complete, is worth a second and third look.

“Game of Thrones,” arrives on HBO .
Martin admits he had a difficult time convincing anyone in the
television business to take a flyer on his fantasy sagas. “I, in fact,
worked very actively in television for a decade, basically, from the
mid ’80s to the mid ’90s, and I was on several shows, and I did pilots,
and I did feature films,” he says.

“And during all that period, every time I turned in
a first draft, it was always, ‘George, this is great, but it’s too
long, and it’s too expensive. If we had five times our budget, maybe we
could do it, but we don’t, so get to work cutting,’ and I would cut and
trim and combine characters, and eventually, by the first or sixth
draft, I would have something they could actually produce,” he says.

has been recruited to host the
Military Channel’s new show “An Officer and a Movie.” Every Friday they
will air a well-known film about the military and feature real, live
officers who lived through major battles or have an expertise in the
conflicts depicted in notable films. Phillips himself is a brat. On Friday the channel will air “,” starring as a Marine veteran training a reconnaissance platoon. The expert
speaker on Friday will be Bronze Star recipient for his actions in , Maj. (USMC).

Visit the on the World Wide Web at www.mcclatchydc.com.