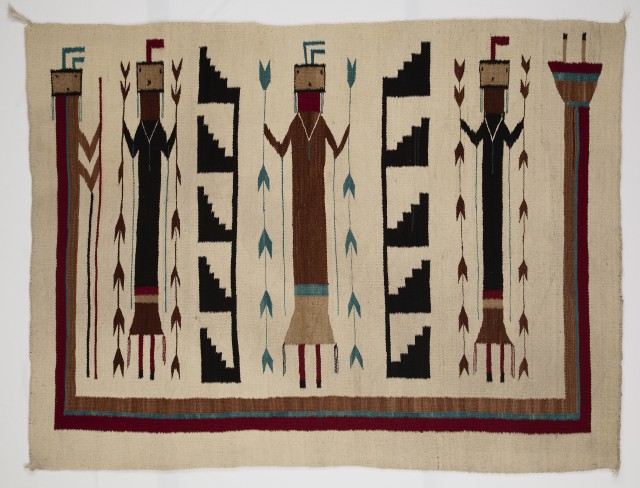 Whimsical animals, zigags, birds and plants woven into Navajo rugs tell stories through silence. Created by Navajo weavers in the late 1800s, these pictorial rugs reflect the cultural impacts propelled by trading posts and the building of railroads in the Southwest.

Dreams, Schemes and Stories, a Navajo textiles exhibit on view at the University of Colorado Museum of Natural History through Feb. 4, invites visitors to venture into Navajo life on the resettled reservations of the late 19th century through the weavers’ art.

Dreams is the second of three installments in Navajo Weaving: Diamonds, Dreams, Landscapes, the museum’s first major showing of Navajo pieces from the Joe Ben Wheat Southwestern Textile Collection. Weaving Memory: Monotypes, by Melanie Yazzie, associate professor of art and art history at CU, is also on display. That showing concludes on May 30.

The Wheat Collection totals about 850 rugs, blankets, kilts, sashes and other weavings by Navajo, Pueblo and Spanish American weavers from the late 1700s to the present.

In 1953, when Wheat was hired as the first curator of anthropology at the University of Colorado museum, there were seven textiles in the museum’s collection. Intrigued by textiles from the Southwest, Wheat began a “textile survey” in 1972 that he continued after his retirement in 1987 until his death in 1997.

During his research, Wheat looked for pieces with documentation, such as bills-of-sale and letters, to identify the history of each piece in the collection. Wheat’s goal was to build a collection of historical weavings with innovative techniques and designs that represented the progression of Navajo, Pueblo and Spanish-American cultures over time.

Made in 1865, the oldest pictorial rug is displayed flat on the left side of the gallery. It is a gray and red horizontal-striped diyugi, or everyday wearing blanket, with four brown cattle figures on a cream background. In contrast, an 1875 diyugi pictorial rug displayed on an angle at the gallery entrance features orange and yellow colors, zigags, diamonds and a mix of bird and cattle figures mirroring the weaver’s exposure to new ideas and materials.

A 1940 rug in the Yei-style, art that depicts figures from the Navajo mythology Yeibichai, shows Yei figures facing front. This rug, displayed with the 1865 rug, was part of Wheat’s personal collection. Pictured with square heads and long bodies, Yei are Navajo deities, or Holy People. Although weavings with Yei figures are not sacred or used in rituals, they do depict imagery from sand paintings created for ceremonies. Near this rug is a 1926 weaving with Navajo Yeibichai, masked human dancers portraying Yei deities. The interpretation of the Holy People varies with each weaver.

“Storm pattern” weavings contain a center box with the corners representing the four sacred mountains of the Navajo reservation. Carrie Yellowman’s 1972 red, brow and cream rug is a traditional storm pattern. The rug hangs at an angle so viewers can see the pattern from both sides. A 1930s blanket to the right of Yellowman’s work features a different look, with red birds in a central star rather than a square.

Corn, beans, squash and tobacco are believed to be sacred plants by the Navajo. In a 1945 Gallop Throw that is about 35 by 18 inches, the weaver focuses on the corn plant in red and black colors bordered by serrated diamonds. A 1958 rug shows the corn Yei with black, brown, yellow and red birds perched in the branches. Birds are often thought of as sacred messengers carrying messages to the Navajo from the Holy People.

Figures stand out in two weavings. A white-bearded Santa Claus holds an ornament and carries a sack in a fun 1950 rug chosen by Yazzie, who grew up on a Navajo reservation. Squares depicting presents are under a green tree. A rug made from 1920 to 1925 shows a figure, possibly a cowboy or rancher, wearing a wide-brimmed hat.

The female figures could be holding hand-cards, devices used to prepare fibers for spinning into yarn. Red letters and cream stars add a unique touch. The border, encouraged by traders, was typical for the time.

A 1974 rug by Harriet Williams-Naschitti shows a serene scene featuring a red hogan surrounded by mountains, sheep, horses and cattle. Sheep were rare in early pictorials. A hogan, the traditional Navajo home, has six sides and a door facing east. Early hogans were made of logs and sometimes covered by red dirt with a central fire for cooking and heating. Today’s hogans are made of wood and have modern amenities. Yet, the door still faces east.

In addition to the exhibit, community programs include a Winter Social on Dec. 10 from 4 p.m. to 7 p.m. featuring complimentary food, music, activities and a viewing of Dreams.

Dreams, Schemes and Stories is a visual and historical treasure not to be missed.

On the Bill:
Dreams, Schemes and Stories will
be showing at the University of Colorado Museum of Natural History, in
the Henderson Building, through Feb. 4. 1035 Broadway, Boulder, 303-
492-6892, http://cumuseum.colorado.edu.