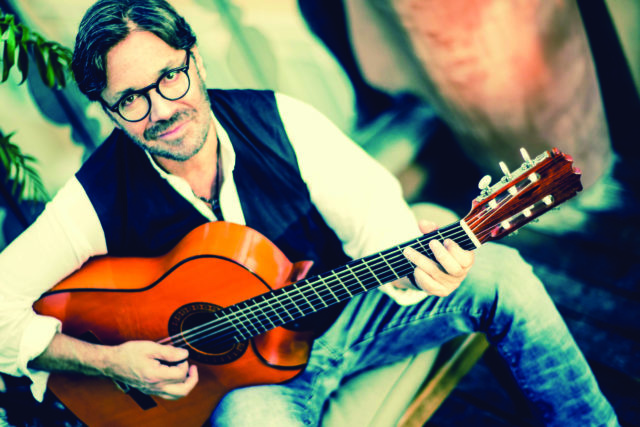 About a week into the deeply unsettling military disquiet unfolding in Ukraine, I caught Al Di Meola on an off day at his New Jersey home, as he was preparing for a tour swing through the Western U.S. Televised images of Russian tanks, urban destruction and bellicose, anti-NATO vitriol coming from the Kremlin had us all on edge—as of this writing, it still does.

Fairly close in age and both growing up near the New York metropolitan area, I asked Di Meola if, like me, he flashed back to those days in grade school when the pall of nuclear dread was an everyday part of life. For us, it was 9:15 a.m. on Fridays: The sirens went off and we all had to practice the “desk dive.”

“Oh, my God,” he laughed, “the air raid drills. Yeah, I remember all that. We were worried about those Cuban missiles, from the Russians. We had to do those drills, like, every day.

“As if the desk was going to save us, right?”

Past is prologue, someone once wrote, and it might be, at least on the tangled ribbon of history. The Kremlin reminds us that the ’60s weren’t that long ago, and maybe in some respects never really ended. Last December, Peter Jackson did kind of the same thing, refreshing our connection to the Beatles with his “documentary about a documentary,” Get Back.

Di Meola, though, didn’t need the reminder. A lifelong fan himself, he released a generously received solo album of Beatles interpretations back in 2013 called All Your Life, recorded in the same Abbey Road studios as the originals, a rare and remarkable opportunity that brought some light into the guitarist’s life at a time when he was entangled in some pretty dark personal affairs.

“I had some days off from my summer tour back then, and on days off, the guys in my band, who were all European, would all fly home, and I was still going through all this [personal turmoil], just sitting in the hotel room, losing my mind. I decided that would be a good time to start assembling some of the Beatles’ music, and just blend whatever I could lend to it, maybe write some parts to extend certain sections.

“So, I was looking around for a studio where I was at the time, which was in Prague, and I just couldn’t find anything. And it just dawned on me, out of the blue: Abbey Road. And I wasn’t even sure it was still operating. I called up a guitar player friend of mine in London and he says, ‘I don’t know, I’ll look into it.’ Calls me back and says, ‘Yeah, they’re still operating—they have one day.’  I said, ‘Grab it !’ And then, one day opened up to three days.

“Every moment there was a thrill, it was like being in Disneyland,” DiMeloa added. “The kind of feeling you don’t get as an adult anymore.”

But after three days, the project wasn’t quite finished, and what happened next… well, it’s one of Di Meola’s favorite stories, he relates it at his live shows and we don’t want to spoil it, but suffice to say that a very weird coincidence aligned to the completion of that project that gave it a kind of blessing that any musician growing up in the glow of the Beatles could only dream about. You’ll hear it at the Boulder Theater gig on March 29.

Fast forward to March 2020, and while he was satisfied that the solo acoustic project achieved what he wanted, Di Meola decided to take it a step further, fully orchestrating another set of Beatles tunes and releasing it as Across the Universe.

“[At that time], I really wanted to do something unique, and it was,” Di Meola said. “But then I thought, wouldn’t it be great to do another record, but full production, in my own studio. And added some electric, which I used as the lead voice for the melody. And also played the drums, which, in hindsight, maybe I shouldn’t have,” he laughed.

If the bookend Beatles projects seemed a curious departure for those who recognize Di Meola as a firebrand electric fusion guitarist, graduate of the landmark ’70s Chick Corea-led fusion band Return to Forever and a player of nearly unparalleled virtuosity, it was a natural evolution and a gesture of appreciation for a guy who, by his own admission, wouldn’t be a guitarist at all if it weren’t for the Beatles.

He related a funny story along those lines.

“George Martin actually presented all of us in Return to Forever [with] a Lifetime Achievement Award from the BBC, which was another surreal moment. I got to sit backstage with George and got to talk to him alone. I told him what the Beatles meant to me, and still do mean to me, and he was totally flabbergasted. He had just heard us play, and he knew Return to Forever very well, and he just couldn’t understand how someone playing that music could have ever liked the Beatles.

“I said, ‘What are you talking about, George? I mean, because of them I play guitar—a whole generation of us started playing guitar because of them.’ He was like, ‘Really?? I mean, they were OK, not on the same level as, you know, Rogers and Hart.’

“I actually found myself arguing with George Martin about how great the Beatles were. ‘Are you kidding me? Those songs were mind blowing.’”

Easing away from the RTF-influenced, Latin-influenced electric fusion over the years, Di Meola has explored more laconic postures, such the jazzier, more nuanced (and ironically titled) Kiss My Axe from the early ’90s, various explorations of world music both solo and with his European acoustic band World Sinfonia, meditations on Tango and interpretations of its master Astor Piazzolla, and most recently, extended original works on nylon string guitar, borrowing from Spanish and classical influences on recent releases like the thoughtful and evocative Opus (2018).

Like many musicians born from the fusion jazz genre, Di Meola has devoted much of his later career toward composition, and distinctly directed toward acoustic guitar. A growing distance from his incendiary electric legacy is in part due to his lifelong passion for Latin music, but also a function of physical limitation. His last electric live release, Elegant Gypsy and More, came out in 2018, a review of tunes from his second solo record and some extras, a blistering re-affirmation of his power as a Les Paul-wielding behemoth. But it was an outlier.

“Yeah…I have tinnitus,” he admitted. “I really can’t do it. Even with the headphones on. I was doing overdubs last night, using click tracks. The ringing is like another level. It never goes away, 24/7, and it can drive you insane.”

All those years of that ’71 Les Paul through Marshall stacks…

“It’s a lot of things,” Di Meola said. “It started with a head injury when I was a kid, and it just progressed. Some people are genetically predisposed to it. It just takes a loud burst of sound to start the overreaction of neurons to the brain.

“And then when I got the gig with Chick, I’d be onstage right next to his keyboard stack. Those high notes from the Fender Rhodes, he’d be banging those notes, ‘da-da-da da-da-da,’ and the horn of his speaker would be right next to my left ear. I mean, I wasn’t in a position, 19 years old, playing in my favorite band, to say anything.

“But yeah, years of onstage drums and Marshall amps took their toll. You know, you’re young, you think you’re invincible. All musicians have hearing loss. Virtually all.”

Even if some don’t really cop to it.

“Pete Townshend,” Di Meola said. “I mean, he has it really bad. But he downplays it. He doesn’t even blame it on the music. He says, ‘Oh, I’ve got this speed boat, I think the wind in my ears caused it.’ I say, ‘Pete, Pete, c’mon, you had 16 Hiwatt amps onstage. You had exploding drums!”

But all of this, Di Meola’s lengthy and sometimes blessed/sometimes turbulent travels through the business, will all be revealed when he’s finished with his autobiography, with which he says he’s about halfway finished. Including the real story why Return to Forever essentially dissolved at the cusp of mega stardom after the band’s luminous The Romantic Warrior release (recorded at Caribou Ranch) from 1975. Most students of the era will concede the band’s disassembly probably marked the end of the great ensemble fusion bands as the genre splintered into more player-focused projects.

For his part, Di Meola has profoundly mixed feelings about Chick Corea, who passed away last year. Deeply indebted to the keyboardist for plucking him out of obscurity to take the guitar seat in Return to Forever and encouraging him to write and constantly push the envelope, Di Meola still laments the band’s breakup, mired as it was in hurt feelings, legal unpleasantness and yearslong regrets about unfinished business and RTF’s unfulfilled potential as an instrumental four piece. (Corea reassembled the band with his wife, Gayle Moran, on vocals, and added a horn section, neutering the band’s by then well-established repute as an electric powerhouse.)

All that was gingerly set aside when the band reunited in 2008 for a tour of the States and Europe, and Di Meola expressed at least some gratitude that that tour actually came off.

“Y’know, Chick…” Di Meola draws a long breath, “I hold him in the highest regard. I’ve compartmentalized him. He was a big inspiration. He was a great player, a great improviser, a great writer, and he’ll be forever in my heart. He called me when I was 19, encouraged me to write music. There was so much positive about Chick.”