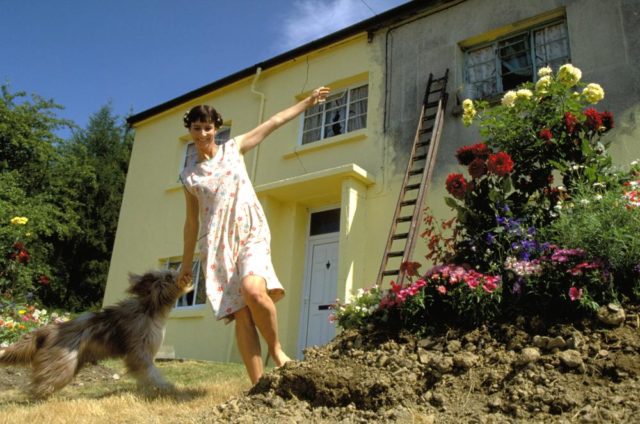 On Dec. 1, TCM’s 14-week series Women Make Film comes to a close with movies on death, endings and a little song and dance. When it’s all said and done, TCM’s series will have screened 100 movies from all six filmmaking continents, and it’ll be up to the 2001 screwball comedy Very Annie Mary to bring down the curtain.

“It meant an awful lot to me,” Welsh writer/director Sara Sugarman says. “I mean, I wrote all my little films, and Annie Mary, sitting in Wendy’s kitchen, listening to her and her friends talk.”

Wendy is Wendy Phillips, a cleaning lady in Wales who Sugarman happened across while en route to a community center that a dramaturge at the Royal Academy of Dramatic Arts told her about. It was the mid-’90s, and Sugarman was looking to make the leap from acting to directing. She had a script, now she needed faces and a place.

“But before I got there, I saw a sign of the name of this village,” Sugarman recounts. A friend of hers used to live there, so Sugarman called her up. “And she went: ‘Go and knock on Wendy’s door at number 65 and send my love.’ And I knocked on Wendy’s door at 65, and she said, ‘Come in, love, have a cup of tea.’ And I never got to the top of the valley. I never got to that community center.”

In Wendy, Sugarman found what she was looking for and made a film — a “little film” in Sugarman’s parlance — and won the Welsh International Film Festival Best Short Film prize. That netted her enough money to make another little film, Valley Girls (1996), also starring Wendy, alongside Gemma Jones, as two Welsh cleaning ladies who win a free trip to Hollywood. Wendy became a sensation.

“She was on the front of every newspaper in Britain,” Sugarman says with a laugh. “She was so funny … the more she spoke, the more they wanted to run television [spots].”

Fast forward to 1999 and Sugarman has another little film ready to go: Very Annie Mary, a comedy based on another valley local, a 33-year-old woman living with her overbearing father (Jonathan Pryce), who happens to be a top-shelf opera singer — “The best in the valley and the second best in Rome.” For the role of Annie Mary, Sugarman flew to Los Angeles to woo Australian actress Rachel Griffiths. Griffiths was in town for the Academy Awards ceremony, and offers for future projects were coming in droves.

“And her mum said, ‘Do the little Welsh one,’” Sugarman says. “And she came straight after being nominated for an Oscar to Wales.”

And where did Griffiths stay when she got to the valley? At Wendy’s, naturally.

“It was the best time in my life,” Sugarman recalls. “Making a little film in the village in Wales with a bunch of local people and actors.”

They give Very Annie Mary charm, flavor and warmth. TCM’s broadcast is set for Wednesday, Dec. 2 at 6:45 a.m., not a bad way to end a series and start the day.