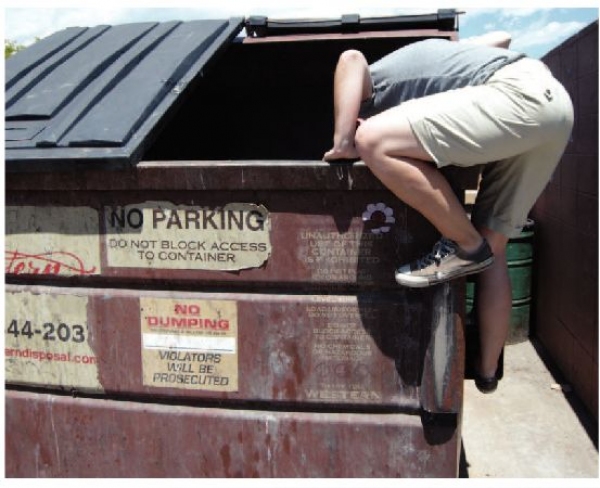 Ban on ‘Dumpster diving’ could leave some hungry

It´s ironic that, in a town and university that pride themselves on recycling and zero waste, people throw away so much food. Whether it’s the city’s upscale restaurants or the resident halls at the University of Colorado, edible food is wasted each day when it is tossed into the trash.

A new CU policy that prohibits people from searching trash bins for food criminalizes the controversial but widespread activity known colloquially as “Dumpster diving.” People who are caught diving could face a maximum fine up to $1,000 and a maximum of one year in jail — a serious price to pay for grabbing a discarded bagel.

But those who are accustomed to getting a bite to eat from the garbage bin say their way of getting dinner not only makes life more affordable for them but also redirects waste from the landfill.

Many people in the Boulder community have become accustomed to searching through the garbage for a meal and depend on the food that people throw away in order to fill their stomachs. Josh, a local Dumpster diver who doesn’t want his name in the paper for fear he might be targeted by police, feels that looking through the trash for food is prevalent in Boulder because the community is so environmentally conscious and has thousands of poor college-age kids. He says the ban was passed for shallow reasons.

“I’m willing to bet the ban was two-fold. Primarily, it was enacted to stop the grotesque sight of a person in a Dumpster — how unsightly!” he says. “Subsequently, and purportedly tantamount, it was enacted for the good health of the poor. Unfortunately, the poor are not stupid and know what is good and bad.”

The accumulation of food waste has increased the popularity of Dumpster diving, especially in Boulder, where the spirit of the community is reduce, reuse and recycle.

“It’s funny how Dumpster diving is presented as the problem, when really it is just a result of a problem,” says Austen Grafa, creator of CU Serves, a volunteer program at CU that allows Kittredge Dining Hall to donate food to local homeless shelters. “I think Dumpster diving is great in the same way that garage sales are great. It is just that people don’t have to feel as privileged when they see others at garage sales. It’s more socially accepted. We don’t like the idea of Dumpster diving because of the social costs, but for someone who depends on Dumpster diving it makes complete sense.”

If all of this food is being thrown away, why is so little being done to get it into the hands of those who need it?

“Why spend money when you don’t have to?” Grafa asks. “I think that anyone who is going to put a lock on their trash should spend a day begging for spare change. I did it as a social experiment, and it was awful.”

Climbing into a garbage bin or digging through bags of trash in search for food to feed your self or your family might not be socially acceptable, but many people take advantage of establishment frivolity and misuse of food.

“I have a limited budget and don’t want to rely on more taxpayer dollars for food stamps. Granted, I’d much prefer to work with businesses so I wouldn’t have to jump into a disgusting pile of filth, but they can’t encourage giving away free food,” says Josh.

Grafa’s goal with the CU Serves project is to bring awareness about the food waste on campus.

“I was working at the Kittredge Dining Hall and noticed how much food was being composted at night,” he says. “The food that was being thrown out was created by the dining halls ‘buffet-style’ service. They always had to have
enough food for the potential customer, whether they actually came or
not.”

CU’s dining
services is an example of a place that is working toward zerowaste, but
there still are leftovers.

“In the spring semester when we did our Scrape Your Plate event,
we measured wastage of .23lb per person served.

This is substantially down
from spring 2008 when the measured wastage was .41 lb per person
served,” says Lauren Heising, RD coordinator for Sustainable Dining at
CU Housing & Dining Services.

Food surplus and unwanted waste varies, according to
Heising, depending on the time of year and the venue. There is more at
the beginning of the school year because new and old customers are
trying out all the new items on the menu.

Whether food is being wasted on campus or off,
people struggling to make ends meet will look for food that costs little
to no money. If you know of a good Dumpster that isn’t too dirty and
the food venue throws away packaged goods, it’s a nice, clean, free
meal, Josh says.

“It’s
considered illegal, but the only potential harm done is to yourself,”
Josh says. “You take all the inherent risk. Coupled with the good
intentions of reducing our society’s waste, you feel like you’re the
unspoken hero — the Robin Hood of food without even robbing. You’re
prosecuted by the police for using a waste product that a company didn’t
even want.”

The
Dumpster menu varies from place to place. Josh reveals that the food
quality depends on where you are looking and what you are dealing with.

“Some places actually
put food in plastic on top of the existing garbage in a Dumpster,” he
says. “It almost says, ‘We know there isn’t anything wrong with it, but
our boss says we have to get rid of it, so hopefully
someone will find and use it.’ Other times you can find fruit piles.
They might not be the most sanitary, but soap and water gets rid of
everything bad.”

Most
people would rather see someone eating in a café than digging from a
garbage bin, but the waste from food venues will suffice for people who
don’t have the money to spend.

Dumpster diving might be banned on campus, but Josh
sees the practice not only as necessary, but also as a form of protest
against social disparities.

“We are telling everyone that people are starving in
our country and we need to do something about it,” he says. “We’re
addressing the problem head-on and getting criticized in the process.”