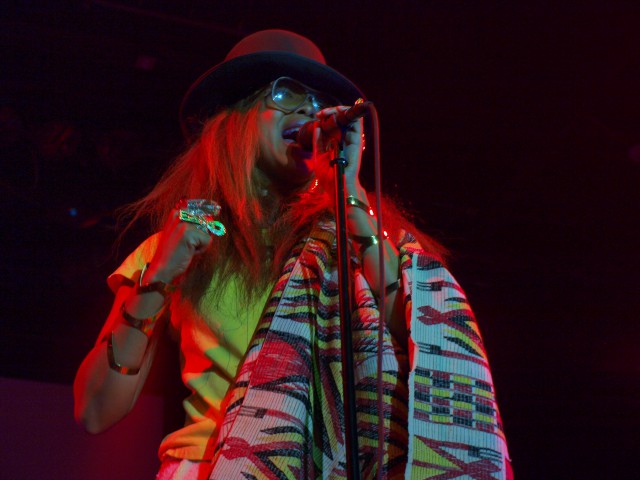 Erykah Badu is just about a month into her Out My Mind, Just in Time Tour with rotating opening acts that so far have included N.E.R.D., Bilal, Lupe Fiasco, B.O.B. and Maxwell. But for most of the tour, including the Denver show at the Fillmore Auditorium on June 16, the opening act has been 24-year old Kansas City native and Atlanta transplant Janelle Monae.

Monae is touring in support of her critically acclaimed sophomore album, The ArchAndroid, which dropped in May. She took the stage disguised in a robe with two of her dancers to the sound of the album’s intro “Suite II Overture” and quickly went into the fast-paced “Dance or Die.” Even if the crowd wasn’t familiar with Monae and the new album, the music was so strong you couldn’t help but get into. Throughout her way-too-short 30-minute set, Monae mostly stuck with tracks from the new album like “Faster,” “Locked Inside,” and “Cold War.” Some of the favorites from her debut, Metropolis: Suite I (The Chase), weren’t on the setlist, probably due to time constraints. She ended her set with an extended version of her current single, “Tightrope,” where her energy, enthusiasm and excitement shone through the most. Monae is definitely ready to headline her own tour for a full-fledged stage show because a half-hour set is just a tease of what she has to offer.

Erykah arrived sporting a colorful poncho, designer sunglasses and a hat to the tune of “20 Feet Tall,” from her new album, New Amerykah Part Two (Return of the Ankh) to the crowd’s delight. She seemed a bit low key compared to previous Denver shows, sipping tea in-between songs and staying in pretty much one area of the stage for most of the night. She ran through recent songs like “The Healer,” “Me,” and “… & On,” but most of Badu’s set consisted of the classics from her debut album, Baduizm. Songs like “No Love,” “Appletree,” “On & On,” “Certainly,” “Next Lifetime,” and “Otherside of the Game,” from her debut dominated the set even though she has four other albums.

And while it was great that Badu added extra flavor to songs like “Love of My Life,” an ode to hip-hop where she interjected quick covers of Slick Rick’s “La Di Da Di,” NWA’s “Gangsta, Gangsta,” and Nas’ “Life’s a Bitch,” she left out some of her somewhat major hits and fan favorites. Songs like “Bag Lady,” “Tyrone,” “Honey,” and even her new single, “Window Seat,” were nowhere on the set list. Regardless, she kept the crowd engaged throughout the night and for her encore, an extended version of “Soldier,” and was excited enough to dive into the audience and crowd surf. Although a lot of the concert-goers left asking, “What about (fill-in song here),” there’s no denying that Badu is a natural talent and she effortlessly performs a great show, even if everyone’s favorite songs aren’t on the evening’s menu.