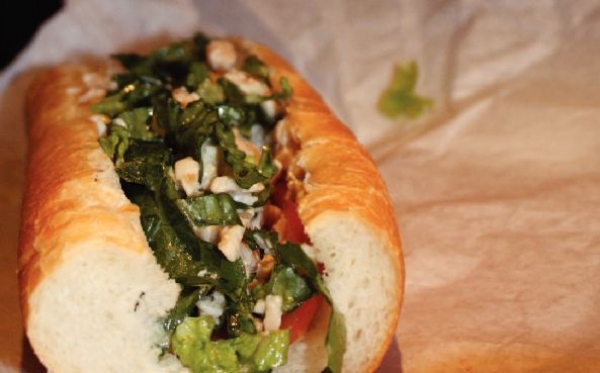 A recent experience at a national chain sandwich shop in Lusk, Wyo., made me realize why sandwiches aren’t often my first meal choice. My sandwich wasn’t terrible, it’s just that this comestible was strictly functional, with little artistry or care involved in its creation. It felt as if the whole effort had been phoned in. Fortunately, unlike a chain shop, one Boulder spot does take extra steps in creating sandwiches that are at once creative, reasonably priced and memorably tasty.

CU may be out for the summer, but you couldn’t tell it from the impressive lunchtime crowd packing Half Fast Subs on the Hill. Besides possessing a clever name, this sandwich shop distinguishes itself by offering such strong drinks as Long Island iced teas and margaritas, and a menu that is longer than Facebook’s privacy policy. Arguably, this establishment offers up more meatless sandwich selections, using ingredients like locally made tempeh, than any other local competitor.

Salads, ranging from a $4.29 garden number to a $6.29 spinach and tortellini job, are also available.

It’s an order-at-the-counter place, with sandwiches available in 7- and 14-inch increments. The 7-inch should be plenty for most people. I’d buy a 14-inch if I needed sustenance for a long road trip where, for instance, I might be called upon to deliver a 1970 Dodge Challenger to San Francisco in less than 24 hours. You can also pick up bottled drinks, chips and potato salad while you wait in line.

Colleague Margot went for a surprisingly hearty meatless selection, the $4.99 BBQ veggie sandwich. Depending on your perspective, the generous slathering of barbecue sauce on this selection was a plus or minus, as it was definitely the dominant flavor. Yet it was a tasty sauce, slightly sweet in a way that tasted homemade, as opposed to something out of a bottle. Copious amounts of mozzarella and Swiss cheese balanced out the sauce’s tanginess, as did full-bodied helpings of tomato, mushroom, green pepper and onion.

Zoe had a $5.99 BLT Avo, a take on the classic bacon, lettuce, and tomato combo augmented by avocado. It was everything you’d expect it to be, with crisp and lean bacon adding smoky richness. Carin desired something spicy, but not full-on unhealthy, and her 7-inch chipotle cheese steak sandwich substituting chicken for beef (tempeh is also an option) perfectly filled the bill. The moist and tender poultry didn’t make her wish she had ordered beef instead, and the peppery spread was pungent but not unbearably hot. A whisper of pepperoni added more complexity and spice without overwhelming.

Since we were there on a Friday, my 7-inch shrimp po’ boy was available as a $6.50 daily special with potato chips and a fountain drink. I was impressed. For a buck or two more than what you’d pay at Subway, you can enjoy a reasonable facsimile of something out of the Big Easy. Featuring Louisiana shrimp (one hopes this ingredient remains available given recent events in the Gulf ) lightly breaded and fried, this sandwich didn’t scrimp on the seafood. A delicate remoulade sauce, coupled with dense French bread, lent an authentic Cajun accent. By the time I polished off this po’ boy, I had a full appreciation of Half Fast’s hearty embrace of value and taste.

The legend goes that the sandwich was invented out of necessity for John Montagu, the Fourth Earl of Sandwich.

Montagu,
apparently something of an upper-class twit, allegedly enjoyed this
combination of bread and fillings during marathon card games. The truth
is that Montagu wasn’t as much of a wastrel as this tale would
indicate, and that he served in such key positions as the First Lord of
the Admiralty, the top civilian advisor to the Royal Navy, during the
American Revolution. However, he wasn’t competent in this position, and
his poor leadership didn’t help naval efforts in the colonies.