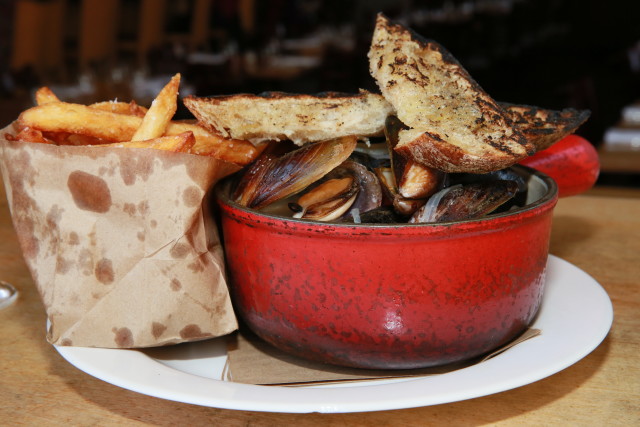 One of the best things about food is that you can be astonished by simplicity. By virtue of using fresh ingredients and letting food speak for itself, a good chef does well when his or her fingerprints are hard to find in a simple dish. A great chef makes simple undeniably their own.

That’s what Heirloom is close to doing. And they’re doing it in a food truck. They use fresh, local ingredients to prepare unique takes on hand-held favorites from pork sandwiches to lamb sliders to hamburgers. Their rotating menu also includes soups, salads and sides like fries or poutine.

I caught the truck outside of Upslope’s Flatiron Park taproom, and ordered a Mexican-inspired pork hoagie, a burger with onion-bacon jam and a big plate of “stewtine,” or fries with stew and cheese on top.

I was immediately enraptured by the poutine. The smell of the stew was rich and meaty, like a brisket slow-roasting in a crockpot in some foggy wooded cottage. The smell of sweet earth emanated from the rinky-dink paper tray, and the simple homespun stew collided with crisp, semi-thick and perfectly greasy potatoes to create full indulgence. Bits of roasted fingerling potato somehow worked with the fried potato. The carrot provided texture and the very light grease and cheese put a blanket around the feel-good receptors in my brain. But the meat, tender and robust, with the smell of black pepper, malt and even something like citrus vinegar, popped and elevated this unfathomably modest dish to something simply great.
It’s also the second time I’ve had good poutine in three weeks, so that’s a pretty excellent development.

The burger was perfectly apportioned. Bright pink medium rare meat was at the center of a patty with medium length and girth. The cheese was sweet, salty and deep aged cheddar. The spring greens on top tasted fruity because of their freshness. And the star was the bacon-onion jam, which was salty and abundant in umami. Those are two foods meant to be eaten together — bacon and onion — as the onion’s sweet and bacon’s savory meet in harmony. If anything was wrong, it was that there wasn’t enough of it on the burger.

Last was the pork hoagie. It had chunks of avocado, tomato, pickled red onion and was loaded with extra-tender shredded pork shoulder. The flavors and textures worked well, like a fresher sloppy joe with a lot less slop. Assuming the pork is done ahead of time, it’s still remarkable how tender and flavorful Heirloom has gotten the meat. Especially because when shredded pork sits out or its use is delayed, the texture tends to harden and the flavor tends to seep out. Neither was the case, and the moisture in the sandwich was refreshing — without the bread losing integrity and falling apart.

Heirloom’s reputation is strong in Boulder County and in other areas of Colorado where it ventures. The chef and operators are friendly. The prices are just a tad high, but I’d argue the value is pretty spot-on. If you can find it, which shouldn’t be hard, hit it up.