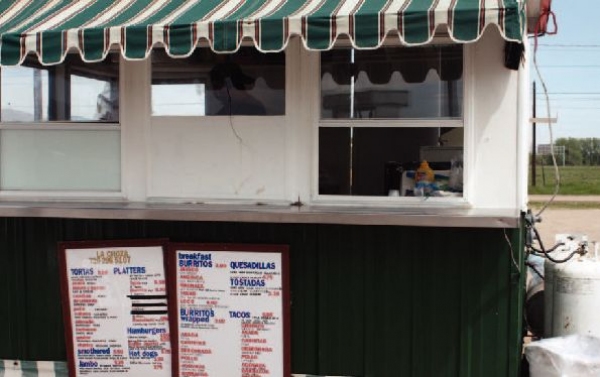 After hearing the distressing news that NBC plans to revive the James Garner private-eye series The Rockford Files, I’ve been revisiting this ’70s classic. While I was a bit more than a tot when the show first aired, I did recall seeing several episodes during my youth. What I didn’t notice were two of Rockford’s character quirks. First, as my friend Mike points out,
Rockford had a peculiar habit of leading women around by the elbow.
Second, nearly all of his dining out involved eating tacos at
beachfront dives.

With respect to dining, Rockford would feel right at home at La Choza, housed alongside the Sinclair gas station on the Diagonal Highway heading out of Boulder. It’s a minimalist operation, with one person taking orders and cooking out of a small trailer. There’s no seating, and you’re likely to see folks eating in their cars. The décor is best described as gravel parking lot with potholes. Most take their food to go, and one often sees customers taking back multiple orders for workplace colleagues.

A cash-only operation, La Choza serves breakfast burritos in the morning and an array of tacos, tortas, burritos, hamburgers and hot dogs until the 3 p.m. closing time. Available meats include chicken, carne asada, buche (pork stomach) and shredded beef. As the sole staffer is preoccupied with cooking, customers order when he steps up to the window asking for the next order. Once the order is made, customers can then step over to the gas station to pick up a soft drink.

Foreign correspondent friend Cynthia went on the lighter side with a $2.25 tostada al pastor, featuring pork marinated with chile and fruit. Despite the modest price tag, the portion was big enough to serve as a more-thanadequate light meal. Health professional Ann noticed that the price would barely cover the cost of the generous mound of sour cream. The pork was tasty and tender, complemented by loads of lettuce and tomato.

Four tacos go for $6.50 here, and two or three should be plenty for normal appetites. Garnishes are simple, with a choice of tangy green or red sauces available out of squeeze bottles on the counter. Instead of the usual sprinkling of cilantro and onion, these tacos come with a tomato and onion topping, resembling a simplified pico de gallo. A wedge of lime completes the condiments, and each taco comes on two modestly sized tortillas. Ann extolled the supple qualities of her adovoda, red chile-marinated pork.

Granted, the taco meats here are a touch greasy, but if that’s a concern this probably isn’t the place for you. I thoroughly enjoyed my traditional carne asada, which had a potent steak flavor perked up by a judicious squirt of peppery red salsa. The ripe fresh tomato and raw onion added an assertive note that complemented the meat’s richness.

As a general rule, the best authentic-style tacos in Boulder County are found in Longmont. But Choza’s are certainly in the same league, and might very well be the best within easy reach of the Boulder city limits. And you don’t even have to be a cool ’70s private investigator to take advantage of this affordably authentic culinary treat.

Speaking
of tacos, Longmont’s Ichiban (2055 Ken Pratt Blvd., 303-485- 9848) has
changed its hours from 11 a.m. to 6 p.m., and has reinvented itself as
an Asian fast-food spot. It’s now featuring a Korean-style taco that
combines spicy-sweet marinated pork with a peppery slaw atop a
tortilla. Korean tacos have become the coastal rage, particularly with
the advent of Kogi, a mobile L.A. operation selling these fusion
treats. Boulder now has a mobile taco truck of its own, the
pink-colored Comida. The menu is available at http://eatcomida.com/, and updates regarding the truck’s location are found at http://twitter.com/eatcomida.