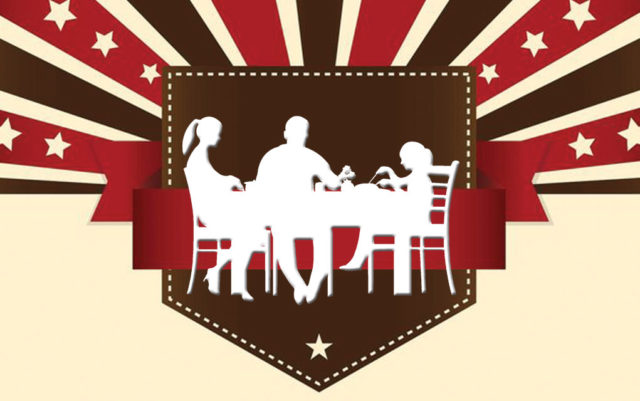 The Food Marketing Institute reminded me recently that September is the third annual National Family Meals Month. Apparently we need an official commemoration to get us to eat together around a table with our devices turned off.

Supermarkets obviously want you to spend more, especially on higher-profit, semi-prepared “family meal solutions” and kits, instead of getting restaurant take-out or delivery.

However, the food industry is spot-on in touting the profound benefits of bonding with kids over a meal. Eating family meals regularly does seem to improve academic performance and reduce early use of cigarettes, cannabis and alcohol and other high-risk behaviors in teens. Kids learn communication skills, manners and how to be an adult. I think of dinner as family super glue.

I grew up in the classical period for the American 6 p.m. family dinner, 1955 to 1965. The TV was always off. Personal electronic devices hadn’t been invented yet. We didn’t answer the wall-tethered phone unless Dad was on-call. We ate pasta, roast chicken and overcooked pot roast and everybody got a chance to talk, or at least that’s the way I remember it.

Reality indicates that Lehndorff dinners didn’t always work as mythologized. By the time I was a sullen teen, dining together en masse happened less, although Sunday supper was sacred. We started watching and talking about the news of the Vietnam War, assassinations and protests in front of the tube, sometimes eating Swanson’s frozen turkey TV dinners.

When I became a parent, I was committed to shopping, cooking and dining with my son. His mom and I gloried in that time and introduced him to new tastes and words. I asked Hans, now a 23-year-old adult, what he remembers about family dinner. His conscious memory begins when Hans’ mom and I were both commuting to work at the Rocky Mountain News. There were some nights when I was out reviewing restaurants, so dinner was with whomever was home.

“Cooking in general was always a big deal. I don’t remember eating at the dinner table that much except for big occasions,” Hans said. “We ate in front of the TV but it was usually the news or Frontline,” he said. He really enjoyed the discussion and debate about provocative topics. “For me that’s still true,” he said.

We agreed that sometimes the best chats happen when you are cooking and not trying too hard to have a meaningful dinner discussion. “It’s just nice to have that time together,” he said.

Those meals at restaurants became precious during his Boulder High years as a busy three-sport athlete with lots of academic pressure, but we persisted and found occasions to eat pasta or a stir fry around the big wooden table, at times insisting that Hans do the cooking.

Hans now lives in Portland, Oregon, doing something with big data analysis for energy utilities. He and his wonderful girlfriend, Becca, cook often together at home, have spirited political dialogues and dine at interesting ethnic spots. Sometimes there is a device on and sometimes not, he says. When he and I talk,we hit all the usual father-son talking points: work, how to pan-sauce salmon, and the state of the Broncos and Rockies.

I’m optimistic about the future of family dinner now that the idealized myth has been shattered. The definition of “family” has happily expanded beyond the Mom-Dad-kids artifice to embrace grandparents raising grandchildren, single parents, step-parents, same-gender and divorced parents, blended families, adopted siblings along with better-than-family friends and neighbors.

The timing of “dinner” has evaporated. Given the reality of family schedules, “dinner” may now be breakfast, lunch or a midnight snack. It doesn’t matter whether it’s at home or at a cafeteria but attitude does.

Certain parental behaviors are guaranteed to cause indigestion and elicit one-word answers. Don’t use dinner to air family grievances. Don’t be a control freak and force kids to eat their spinach, and never discuss weight control.

Family cooks need to chill and give up on making perfect food and admit that family dinner won’t happen every night. Cook kids’ favorite foods (within reason) but also introduce new dishes that you like. Serve pizza, but buy ready-to-stretch dough and let everyone personalize it to their own peculiar dietary needs. Bake brownies or another dessert so the house smells great.

Memories and families are made of this.

On Sept. 18 take time to observe National Cheeseburger Day and consume a medium rare double cheeseburger at an obscure granite monument at 2776 Speer Blvd. (now a Key Bank office) in Denver. In 1935 it was the location of the Humpty Dumpty Drive-In, where owner Louis Ballas added cheese to a hamburger, called it a “cheeseburger” and trademarked the word. The all-American sandwich was named after the German port of Hamburg, where the cheap sandwich was served to sailors and immigrants on their way to the U.S.

“Vital is a family atmosphere in which parents treat each other and their children with respect, affection and smiles. The best forum for this is still the dinner table. When teenagers first give excuses why they can’t make it to a meal, parents should say very positively: ‘We like to have the whole family get together.’” —Dr. Benjamin Spock