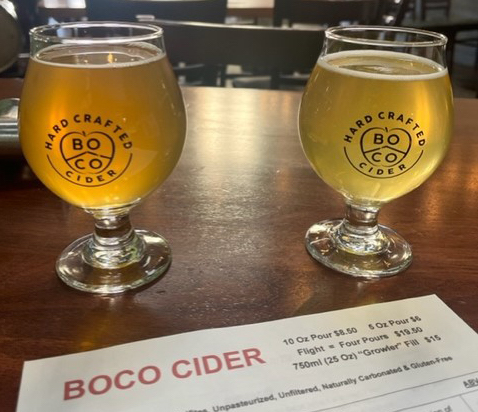 For Michael Belochi, producing hard cider is a joy as well as a job. The owner of BOCO Cider in North Boulder enjoys featuring the natural flavors of his ingredients. BOCO Cider, which touts its motto “Made the Boulder Way,” crafts wonderfully boozy and refreshingly complex fruit-based libations.

“We make our ciders in a natural fashion,” Belochi emphasizes. His small-batch creations do not include sulfites, filtering, artificial ingredients or pasteurization, and they come by their carbonation naturally — by adding a bit of fresh juice back to the kegs, the yeasts in the cider mix with the juice’s sugars to create carbon dioxide as a byproduct. That’s just science.

One sip of a BOCO cider, such as Point Blanc, a cider version of a Sauvignon Blanc wine, reveals a nuanced and artisanal drink that includes notes of green apple and white peach.

“We try to mimic the kind of cider that you might have had if you were on a farm a hundred years ago,” says Belochi. “They didn’t have all the modern equipment and chemicals that are available to us now, yet they still made a ton of cider that was nutritious and great for drinking. I’m more like an old-school farmer. I throw different apples into the mix, select our yeast, and avoid modern chemicals and techniques.”

Belochi’s method of cider making seeks to retain the real taste of apples and other ingredients — which can include local hops, pears, peaches and grape skins, among other goodies. The resulting cider is less “shelf stable” than more commercial hard ciders that are distributed in cans or bottles. A pour of the cider, straight from a barrel or keg at the North Boulder taproom, yields a bubbly elixir that evokes a visit to an orchard or an old farm.

Popular flavors of BOCO Cider include English Style, with notes of pear and hints of caramel; Trunk & Twig, which is aged in oak barrels for a few months and conditioned with Vermont maple syrup to create a soft and sour result; Petrichor Cascade, a blend of Washington apples with hand-picked Boulder-grown hops; or Pearfect, a blend of apples, pear juice, chamomile tea and Colorado honey. In the three-plus years that the cidery has been open, Belochi says they’ve offered more than 50 flavors of cider.

Belochi and his cider maker, Josh Smith, experiment with a variety of ingredients. While much of the apple juice used in their creations comes from the state of Washington, they also like to draw from Boulder County fruit as often as possible, using locally foraged apples to press batches such at Tree Chee, which adds a bit of imported lychee juice to a sour cider drawn from area apples, or Bougie d’Pomme, a local apple-based cider that was pressed at the 2021 fall equinox and inspired by French pommeau (an apple-derived version of port).

“I’d say ‘foraging’ is the right word for what we do when using local ingredients,” Belochi says. “We especially don’t want apples to go to waste, so we tell people that their apples don’t have to look perfect. We use any and all backyard apples, and we can use them regardless of imperfections.”

Nurturing a sense of community is a theme at BOCO Cidery, whether it be by free-cycling grape skins from nearby BookCliff Vineyards, reusing oak barrels from nearby whiskey distillers, or incorporating locally grown hops and fruit for use in its tasty products. In addition to pouring delicious cider, the taproom also provides live music by a host of artists from Boulder and the surrounding area.

BOCO ciders, which are also gluten free, range in alcohol content — from about 5% to 17%, with most being between 7% to 8% ABV. If you’re looking to experience thoughtfully-crafted and crisp tasting libations in a relaxed atmosphere, visit the taproom anytime between 3-8 p.m. Thursday through Sunday.