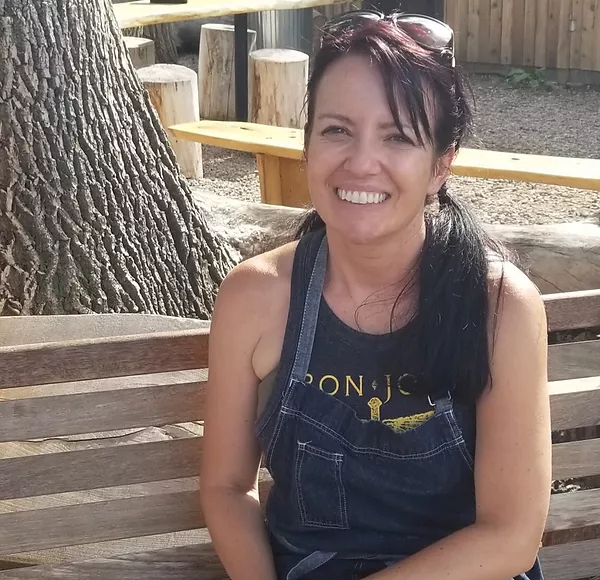 If it were up to Donna Merten, you would never see a menu until you arrive at a restaurant and the dishes would feature ingredients that we now throw away.

“We have to turn the whole restaurant model on its head,” says Merten, owner of FED, short for Farm Eats Direct, a 2-year-old catering company. “We shouldn’t be ordering industrial ingredients. We should be thinking: ‘What’s best for the local farms?’”

“There’s plenty of organs out there that nobody buys,” she says. “We get the trifecta of kidneys, hearts and livers from the farmers, combine them with mushrooms and grill it. You’d be amazed how many customers love them and get disappointed when they aren’t on the menu.”

Even popular dishes don’t stay on her menu long because she never knows which ingredients her crew will have to cook with.

FED runs an unusual restaurant CSA for local farmers. “I guarantee them a certain amount of dollars every week and they can bring me whatever they want. They sometimes ask, but I say: ‘You guys know I’ll take whatever you couldn’t sell to everybody else: restaurants, stores, CSAs and farmers markets. I honestly do not care,” Merten insists.

With perfect timing, our chat is quashed as huge bags, crates and boxes of carrots, peppers and greens arrive unexpectedly from Speedwell Farm. “It’s like Christmas!” Merten says with an ear-to-ear grin.

“And this is just today. It’s like this every day,” she says, sharing a sample from a flat of very ripe yellow cherry tomatoes. “I think the flavor profile is better for produce (that has been) out in the field longer.”

Among the dozen farms that show up with ingredients are Lazy J Farm (pork), Longmont’s Caribou Ranch (beef) and Buckner Ranch (lamb).

That’s the menu … today, at least.

“When all the stuff comes in, we look at it and agree on how we’re going to use it and then we start processing it,” Merten says.

“I have no system. I have no structure. There are no recipes and there’s no menu. Some people have meltdowns and can’t deal with it,” Merten says, adding that culinary school students have to unlearn everything they were told about farm-to-table food.

Merten is serious about using everything. “Farms bring us a lot of bones we turn into stock. The pig skin we fry into chicharron.” Then there are the pig heads. “We boil them in big pots,” she says. “I love the delicate pig cheek meat.”

Farms mostly dispose of aging roosters and hens that stop laying. Merten wanted those tough old birds: “I have a family recipe. You slow braise them for 16 hours and the meat gets so tender.”

That bag of carrots she just hauled to the cooler will be chopped and fermented or pickled. The carrot greens will become chimichurri sauce. Merten also fries the fronds as a crispy topping on dishes. She loves herb and kale stems that stay crunchy when fermented.

“We’ve even figured out how to deal with all the surplus eggs. We freeze the whites, pickle hard boiled eggs and make salt-cured duck egg yolks,” Merten says.

“We’re like squirrels trying to plan for the winter. It’s also giving money back to farmers for food that would have been a financial loss.”

The kitchen also crafts vinegars and kombucha, sprouts organic seeds and beans, and generally upgrades the nutritional profile of everything, but FED doesn’t preach to the customers. “Luring is better than lecturing,” Merten says. “Once people try our food they trust us and appreciate the way we do things.”

Merten had already enjoyed a 20-year career as an architect and real estate developer when her drive to change the food system sent her to the University of Colorado for a graduate degree in food systems. She pitched her idea for the FED truck and won a venture business challenge. She launched FED after her 2020 graduation.

However, FED’s real origin story starts in Indiana. Merten enjoyed time with her grandmother, a private chef with a 100-acre working farm. “She taught me how to cook. That’s where I learned these old school farmhouse practices. You just didn’t waste anything,” Merten says.

That includes what little that she doesn’t make edible.

“Anything leftover goes back to the farms,” she says. “It’s full circle. You feed organic produce to the animals, which produce healthier meat.”

The FED trailer in Lyons will be open year-round, weather permitting. Merten’s mobile food truck offers food plans for families, and caters events. “We don’t have advance menus for them, either,” she says.

Opening a large new catering kitchen in Loveland will allow her to feed her rapidly growing business and produce seasonal products to be sold in local markets.

“I feel it’s critical to grow. The more we can grow, the more food we can buy from the farmers and help the local food economy,” Merten says.

“Last year we saved over 40,000 pounds of food and we will at least double that this year.”

Bova’s Market & Grill has reopened at 1100 28th St. Frontage Road. … After being closed since 2020, Brasserie Ten Ten has reopened at 1011 Walnut St. The eatery’s original chef, Tony Hessel, will head up the kitchen. … The Stone Cup in Lyons is closing on Sept. 5 After 18 years in business.

“The farmers suffer a lot to get restaurants perfect produce. Statistically, 40% of what is grown in the U.S. stays on the field. How do we, as chefs, capture that food and keep it from being wasted?” —Donna Merten.