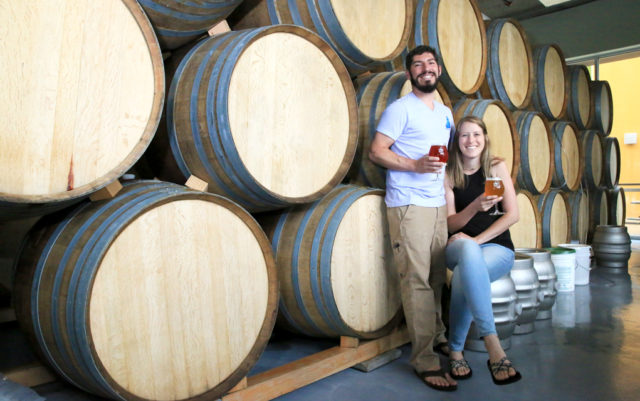 We want to bring it back to the land,” Lisa Boldt of Primitive Beer says. “Bring it back to being creative, being fulfilled in a more creative pursuit.”

And from where she’s sitting — on couches arranged in a horseshoe with her husband and brewer, Brandon, in the middle of their Longmont brewery and taproom — Primitive Beer looks more like an artist’s loft than a brewery. Sure, the space contains all the usual trappings: one side has a counter with six English-style taps, half the area is taken up by stacks of puncheon and Bordeaux barrels, and the koelschip — a large tub where the magic happens — sits under a wooden lattice. But the combination of concrete, white walls, warehouse racking and oak creates a warming and welcoming atmosphere. Here is a place for creativity.

Located in the Prospect New Town neighborhood, Primitive Beer is unlike just about any brewery you’re liable to wander into. That’s because the Boldts have decided to forgo the new and follow their bliss: spontaneously fermented ales made using one of the oldest known brewing processes.

“We figured if this was the one we cared the most about,” Brandon adds.

“And the one that we would love to take decades to figure out, we might as well become experts,” Lisa continues.

The genesis of Primitive Beer dates back to the couple’s trip to Belgium. Both fell in love with spontaneous ales, known as “lambics” and “gueuze,” their production methods, the café culture surrounding them and their historical significance.

“This return to authenticity is something that definitely drives us,” Brandon says.

Authenticity, and an adherence to specific brewing techniques known as “Méthode Traditionnelle,” is what makes Primitive Beer vastly different than anything you’re likely to find in Boulder County. These are not the treacly lambics you had back in college, nor do they deliver the mouth-puckering fizz that comes with a fruited sour; these spontaneous ales load the glass with subtle funk, balanced acid, touches of fruit and delicious dryness. They skew closer to Burgundy wines and rustic ales, conveying the sophistication of the former and the everyday pleasantness of the latter while being made entirely from Colorado ingredients.

“It gets back to the history of this beverage, which is: spontaneous inoculation,” Brandon says. “You’re producing something in your space… harkening back to trying to use that local ingredient and trying to speak to the flavor of your area.”

The French have a word for it:
terroir, and the Boldts express Colorado’s terroir in every glass.

“We figured Colorado is one of the best places to start this project,” Lisa says with a smile, “just given the number of breweries and beer geeks who are just psyched to learn new stuff.”