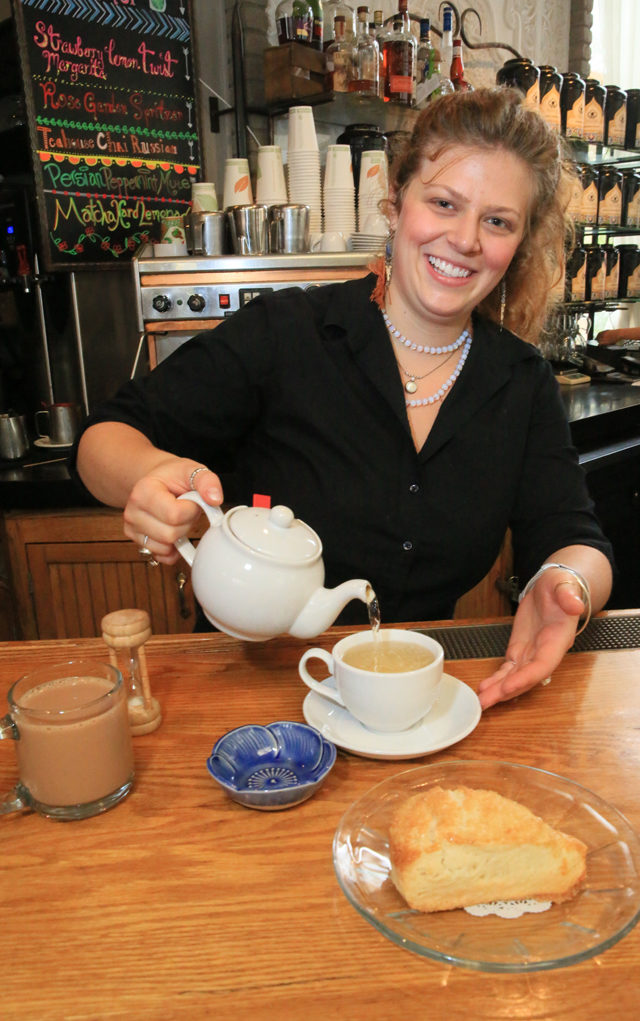 That’s the first thing America associates with Boulder… well, beyond any news or sports stories. They think of Celestial Seasonings, America’s best-known herbal tea company, launched here 45 years ago. It’s part of Boulder County’s larger natural foods aura. This is the home of Red Zinger and Sleepytime and other herbal teas. (Technically they are tisanes since they don’t contain black, green or white leaves of Camellia sinensis.)

Tea aficionados know about the abundance of local tea rooms from Boulder’s Ku Cha House of Tea to Louisville’s Cooper Tea Company, plus at least five local companies bottling variations on chai and others focused on making tea-based kombucha.

However, the center of tea life in Boulder for the past 20 years has been the internationally known Boulder Dushanbe Teahouse, a one-of-a-kind handcrafted Persian teahouse given to the city of Boulder by its sister city, Dushanbe, Tajikistan. This weekend
(July 28-29) is also the 20th anniversary of Boulder’s quietest ongoing food and beverage gathering, the Rocky Mountain Tea Festival at the Boulder Dushanbe Teahouse.

“In 1998 after we had just opened the Teahouse, I had this idea of offering tea classes to the community. I was still learning a lot and wanted to invite the mentors who were teaching me about tea,” says Sara Stewart Martinelli. She and her husband, Lenny, co-own the Teahouse and other local restaurants, as well as Three Leaf Farm in Lafayette.

“I started inviting my wish list of tea mentors, and they all said, ‘Yes.’ With five of them coming we figured we better make it a weekend. That’s how the Rocky Mountain Tea Festival was born,” she says.

It is now one of the longest-running consumer tea festivals in the U.S., yet, it’s largely unknown in Colorado even among avid foodies. That small, quiet approach is partly by design.

“We put a cap on the number of people in the classes and workshops, and they almost always sell out. It fills a nice little niche because it’s not a trade show, it’s for consumers to have hands-on classes with experts,” Martinelli says.

Other workshops include Chinese Poetry and Tea, and How to Brew Tea, as well as guided tastings of Taiwanese oolong and Chinese green teas.

The tea education never stops. “Tea is such an interesting product that varies so much from region to region. You can dig deeper and deeper into the layers of information,” she says.

Millet is one of the oldest cultivated grain crops. During the 18th century it was hugely popular and was grown and consumed by early American colonists. However, if I showed you some millet now you would have a two-word response: “Bird seed.”

Slowly but surely millet fell off the map as sexier grain products like wheat, rye and corn took over. It’s a great drought-tolerant crop, and Colorado is the largest grower of millet in the United States, although most isn’t for human consumption.

It’s a shame. Gluten-free, high-fiber, low-glycemic — millet is as high in protein as wheat and delivers niacin, magnesium, copper, manganese and zinc. Those little yellow beads have a mild flavor, taste nutty when toasted and absorb broth and other liquid much like couscous or risotto.

Into this millet void stepped Ryan and Lindsey Cunningham. The Boulder couple operated a food truck in 1980 called Rollin Greens and rebirthed the company to produce Rollin Greens Millet Tots, a frozen organic, vegan convenience food. The proso millet they use is grown at Golden Prairie Farm in Weld County.

Millet Tots come in three varieties that are a definite upgrade on the familiar fried frozen potato barrels: original, spicy-sweet and Italian.

The original-flavor tots are mild enough for kids, a good conveyor for organic ketchup and an ideal base for a healthier poutine, topped with gravy and cheese curds. I liked the Italian herb Millet Tots as a sort of gnocchi with marinara and melted provolone. My favorite was the craveable spicy-sweet variation laced with organic sweet potatoes and poblano and jalapeño chilies.

They cook in 15 to 20 minutes in a conventional oven or air fryer. All three kinds definitely benefit flavor-wise from extra time in the oven getting really crisp.

It should be noted that these are actually millet cubes, not the traditional barrels, providing more crunchy surface area.

“(The traditional black mole was) so dark that it seems to suck the light out of the airspace around it, spicy as a novella and bitter as tears, a mole whose aftertaste can go on for hours.” — LA Times dining critic Jonathan Gold, 1960-2018