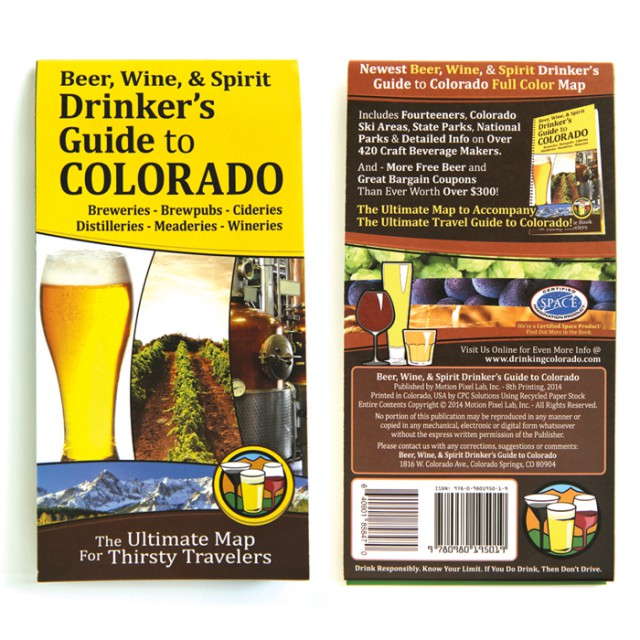 The newly- 21ers out there may not believe it, but there was once a time when those of us aged more than 25 years — you know, “old farts” — didn’t have a fully interactive, voiceactivated GPS in our pocket at all times. We had to carry around giant, totally unfoldable pieces of tree carcass with directions scrawled on them in tiny, barely legible print to know where we were going. You know, maps. And in this age of smartphones, it would be almost inconceivable that anyone would still lug one of those dinosaurs around.

It’s really fun to stick ’em to the wall and put red pins in all the places you’ve been, perhaps with strings webbing out from your home base. Can’t do that with a smart phone.

And for beerophiles out there, the map is alive and kicking.

Beer, Wine and Spirit Drinker’s Guide to Colorado just published its eighth edition of its map of the state’s breweries (something that has to be updated annually to keep track of all the new additions).

In the eight years the map has been publishing, Colorado has more than doubled the number of breweries in the state — enough that the map alone wasn’t cutting it anymore.

“We just couldn’t fit it all on a single sheet of paper anymore,” publisher Mike Laur wrote in a press release. “So we created a whole new guide book.”

The map now comes with a 174- page spiral bound guide book, as well as a thick stack of coupons for breweries around the state.

And in another big move, the publication expanded beyond beer for this edition. The guide now includes every brewhouse, cidery, meadery, wine-maker and distiller — or as Tommy Lee Jones would put it: every gas station, residence, warehouse, farmhouse, henhouse, outhouse and doghouse — in the Colorado area making it the boozehound’s guide as much as the beer-lover’s.

The guide is organized into seven geographic regions, each with fold-out mini-maps, breaking down all the local hooch, its relevant deets and marking it on both the fold-outs and the larger, wall-sized map. But it doesn’t stop there. There are also guides to which glasses go with which drinks, ABV rates, basic brewing and distilling processes, available beer/bike trip options and various legal guidelines. A whole page is devoted to weed, and so on. One page covers the state’s 14ers, since nothing seems like a better idea after a couple of drinks than mountaineering.

Of course, seasoned — or saisoned, as the case may be — Colorado beer drinkers may already have a lot of that info internalized, ready to be brought up at any and all conversations with out-of-staters and newbs browsing the book. For them it’s all about the map and the Passport, the corresponding coupon book with around $300 worth of free beers and discounts at breweries statewide.

The guide is now available at bookstores, and at www.BeerDrinkersGuideToColorado.com/ beermap.html.