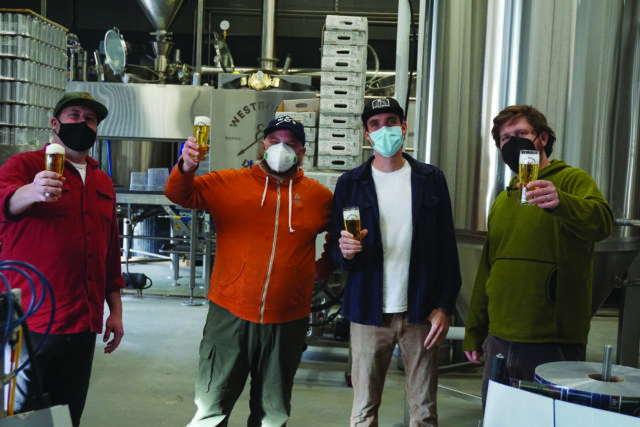 Let’s start here: If you haven’t stopped in for the burrata at Lafayette’s Westbound & Down Mill, you must. The base is a Goldilocks-sized slice of roasted beet, topped with blood orange, soft Italian burrata, chopped Marcona almonds, dotted with microgreens, and drizzled with olive oil and bright salsa verde. It’s outstanding. Order one while waiting for the 95th St pizza—Ezzo pepperoni, salsa verde, red sauce and spicy honey on a spectacular cracker crust with pillowy pockets of chewy dough.

“We’re not going to stray away from pizza,” says Casey Taylor, Westbound’s general manager and head chef. Rightly so. The menu includes six pizzas, three shareables, a salad and a cookie. Taylor foresees a time where more seasonal offerings will come into play, but only as long as he can tie the kitchen side of Westbound to the brewing. For the pizza, that can mean using Westbound’s Mexican lager as a starter for the dough (a custom blend of flour milled at Dry Storage in Boulder). Taylor then lets the dough ferment for 48 to 72 hours before cooking. It’s dynamite.

And to hear Taylor and the rest of Westbound’s staff explain how they got here is also to understand how the past two years have shaped the brewing industry.

“There’s no way to say that what happened has been positive—in a financial aspect,” head brewer Jake Gardner says of the pandemic. “But, did it push us outside of our comfort zone to help get us to where we are? Certainly.”

And that includes switching from building a “dream campus” in Lafayette, as Westbound’s marketing director Eric Schmidt calls it, to taking over the former space of Endo Brewing Company.

“I think that too many craft breweries divide the community—which is what [craft beer] is kind of built on,” Schmidt says. “So filling a space that already existed feels good.”

It also helps that the hands behind Westbound are interested in growing Westbound, but not too much. Gardner likes his staff on the smaller side, with everyone engaged and on the same page. Brewer Derek Goodman—whose ear-to-ear grin is so radiant, not even an N95 mask can hide it—approaches the beer with the same level of hands-on enthusiasm. The recipes are dialed in but far from “set it and forget it.”

“Every year or so, we have to take stock of what’s changed and what happened,” Goodman says. “Which is really fun. Sometimes slightly frustrating, but keeps everything honest and keeps us really excited.”

And that includes his enthusiasm for New Light, Westbound’s Cold IPA—a relatively new approach to hop-forward IPAs fermented with lager yeast. The beer is exceptional: Tropical fruits pop off the nose, but without the dankness that can sometimes muddy the aromas and flavors of a juicy/hazy IPA. Instead, New Light’s profile is as clear as the liquid and delivers plenty of hop-prickle on the gums and tongue. That part you expect from an IPA, but it’s in the finish that New Light really takes off: Clean as a whistle and bone dry. It’s the kind of beer you don’t realize how much you love until you’ve put back three and are ready for a fourth.

But if new-fangled IPAs aren’t your thing, Westbound has you covered with 17 other brews on tap, nine of them in to-go cans. How Westbound started canning speaks a little to the luck that has kept the brewery thriving.

“We’d flirted with buying a canning line for, like, two years,” Gardner recounts. “And then, finally, I was just like, ‘Screw it. Let’s buy it before we have the building to put it in and just can a little beer.’”

That was in December 2019. Three months later, you couldn’t buy a canning line if your life depended on it. And for just about every brewery entering the pandemic, life depended on canning.

You could call it a cart-before-the-horse moment, but the purchase worked out, and now Westbound’s canning line sits in a place of prominence in their fully renovated Lafayette digs. It separates the shiny stainless steel tanks of the brewing area from the bright, clean modernist taproom, white subway tiles gleaming as the warm Colorado sun pours through large windows making the blond wooden tables glow. It’s a welcoming place to drink a beer. And when you do, there’s a good chance that you’ll spot Gardner, Goodman, Schmidt and Taylor either behind the line or at the bar. Talking to customers about the beer, the food or the space is one of their favorite things. Though, if you’re not ready to hang out and gab just yet, few things travel better than pizza and beer. Just make sure to take some burrata with you.