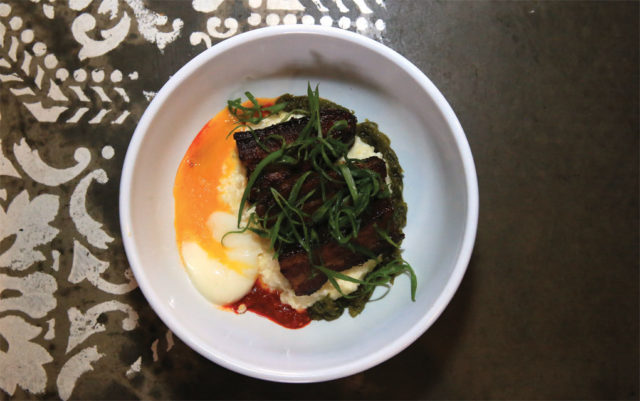 “Even at work people are like, ‘You’re never mad,’” Teigland says. “I’m a mellow dude. There’s always a solution, so there’s no need to be frazzled.”

For Teigland — a heavy metal guitarist with a theology degree and experience cooking at Michelin-starred and James Beard Award-winning restaurants — food is comfort. It started with his upbringing in Chicago.

“Seeing my mom, food was her love language for people,” he says. “My brother, I remember one day he drove with his now wife from college nine hours to come stay for the weekend, and they got in at 1 a.m. and my mom’s like, ‘Oh, I’ll make you some snacks or whatever.’ And it was like 12 courses and she’s just throwing out all this stuff. That definitely got picked up by me. It’s just a way of taking care of people. I want to make sure my team feels like this is a safe place and a good place to go to work, where they’re not going to feel pushed when life sucks.”

There was no guarantee Teigland would end up at the helm of the Community kitchen, which is now a bona fide local favorite for its innovated New American comfort food. He was working at a bank in Denver, pursuing that theology degree online, treading water more or less, when he had a moment of clarity.

“I was doing really well at the bank but one day they pulled me in and they were like, ‘Five-year plan, where do you see yourself?’ And I was just like, ‘Shit, I quit,’” he says.

It was food that offered him a way out of corporate hell: He started selling burritos at workplaces around Denver for $3.

“I was making more money with breakfast burritos than I was, you know, managing people’s investments,” he says.

He moved onto a wine bar, then to Chicago for stints at the esteemed Alinea and Hogsalt, before coming back and eventually taking over the kitchen at Community. There, he has struck a balance between his affection for comfort food and the precision and simplicity of fine dining. Take, for instance, a plate of crispy potatoes with green chili and cheese.

“Every part of me hated it because it was so trashy, and just like this grungy bar food. But then when we ate it, and it’s like crack… you can’t not do it,” Teigland says. “So part of it is making peace with those ideas. It doesn’t always have to be — we call them tweezer chefs, where you plate everything with the little greens everywhere. I do love and appreciate it but at the end of the day, potatoes with chili is really good.”

Teigland’s approach to food is the same as his approach to cultivating an enjoyable work environment and a pleasant atmosphere for diners. In so many ways, Community is the most fitting place for Teigland to serve his food.

‘I always thought one day I’d be a rockstar’

Teigland grew up playing in bands, mostly metal. It was an important creative outlet, but when life got harried, slowly he drew away from songwriting and guitar-playing, and it took a toll on his well-being.

Then, he began to cook.

“The less I was playing guitar, the more I was making recipes,” Teigland says. “It kind of met that creative need.”

Since entering the food industry, the parallels between running a kitchen and fronting a band have scratched Teigland’s itch for community and creativity.

“Having these crazy songs and sets that are an hour long… it’s not that different than running a kitchen, where instead of like a bass player and a drummer, I have a sauté cook and a grill cook, and I have somebody on the flat top and we’re doing all these things in unison,” he says. “At the end of the day, once you see something awesome come out, it’s the same as music. Like I got to hear this really cool song or write this really cool song… or I just created this menu that’s just awesome. It really does seem almost the same to me.”

The kitchen lifestyle also meshes with the musicians’. Teigland says you have to alter your schedule so radically that your pool of friends shrinks to those who also work nights and whose weekends are Monday and Tuesday. The lifestyle is a pressure cooker, mashing “ex-cons to high school kids” into friendships. It’s insular, like a gaggle of metalheads can be, and it works better for some than others.

“I know there are a lot of issues with mental health in the kitchen, I think everybody, whether they want to admit it or not, struggles with some kind of mental health issue,” Teigland says. “For me [the kitchen] is a good outlet to not be depressed or stressed.”

Coming soon from Community: Ramen, rum and tacos at Birdhouse in Erie

“The new comfort foods. Every time we want to go out to eat, it’s like my wife wants tacos, I want noodles. And it was just like, let’s make a place where we can do both.

“It is kind of like a nightmare in a sense,” he adds, laughing. “Trying to design a kitchen, like how are we going to do this? But I think we got it, and I’m super excited about it.”

They’re not peanut butter and jelly, but ramen and tacos go together better than you might think, at least from a preparation perspective. They’re both foundational dishes, albeit from opposite sides of the world, and swapping traditional ingredients in one for the other will likely create fun, delicious plates and bowls of food.

For instance, Birdhouse will have an al pastor spit, on which they’ll slow-roast pork butt. It’s pork belly that ends up in many traditional ramen dishes, but Teigland says they’re experimenting with swapping in pork shoulder, from the same part of the pig as the butt — an economic decision, in part, as they’ll be able to buy that section of meat in bulk. But it also will result in a unique spin on classic ramen.

Teigland says there’s no need to ram traditional Japanese and Mexican flavors and forms together just to prove the concept, however.

“I like the challenge of making authentic tacos — and some of them will be really fucked up and our own version — and then really authentic ramen too, with probably one bowl that’s really bizarre,” Teigland says. “But I kind of feel like that just pays honor to the people that have been doing this for hundreds of years.”

Some of those “bizarre” versions aren’t so much bizarre as they are… delicious-sounding: Nashville hot chicken tacos, French onion ramen and, sure, some crossovers like tacos with kim chi, barbecue beef and fried rice.

Test some of the flavors out for yourself at one of the Birdhouse’s pop-up dinners at Community ahead of the restaurant’s launch. The next one is March 24, starting at 4 p.m., where ramen will star. Visit eatatcommunity.com or eatatbirdhouse.com for more information.