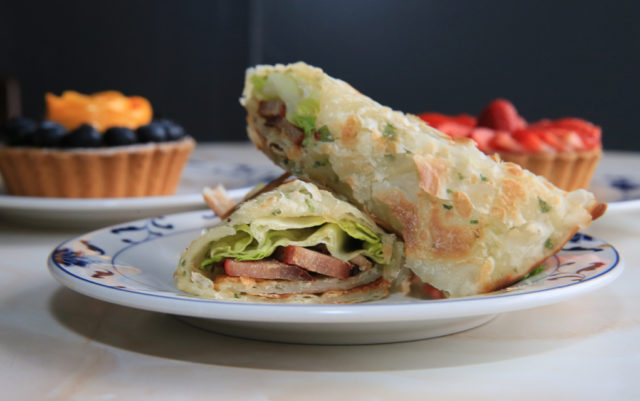 She had me at “dumplings.”

I had poked my head into Formosa Bakery, recently opened at 1305 Broadway on the Hill, to check out the pastries. What I discovered was a menu of dim sum treats wrapped in various kinds of dough made by Taiwan native Nancy Kao.

On a winter afternoon I tucked into a substantial steamed dumpling — sweet potato dough encasing chopped beef — in a rich miso gravy. I also pounced on steamed buns middled with barbecued pork.

On a return trip, I dipped shu mai — steamed dumplings — in soy chile sauce along with some perfect hot, crispy pork and chive potstickers. I have to get back to try the oyster omelet, the duck egg and red bean buns, and the thin Chinese scallion pancakes wrapped around barbecue pork “like a taco,” Nancy Kao says.

For 20 years she owned and cooked at Lee Yuan Chinese Restaurant in East Boulder until selling the business and retiring. “I stayed home for about two weeks, but it was a feeling I never had — I had nothing to do. So, I started to look around for a little place and found this shop,” Kao says.

She decided to focus on the street food items she had only served as specials and the dim sum goodies that were traditionally dished on weekends for dim sum brunch.

Kao makes everything from scratch, including all of the sauces, and won’t use the typical frozen dim sum items. She even plans on producing her own boba for drinks, wrinkling her nose at the packaged tapioca balls others employ.

After a few months Kao added a flip side to the menu featuring items her old customers at Lee Yuan were missing, including Chinese-American favorites plus specialties like sautéed green beans, sticky rice with chopped pork and daikon, and seriously good-for-you bone broth for her famous beef noodle soup, aromatic with garlic, ginger and spices.

The location comes with some challenges. She is virtually a one-woman kitchen with limited table service, and the parking nearby is almost always difficult. Chinese students are regular customers looking for a taste of home, but it remains undiscovered by most diners. Some folks suffering from an overabundance of caution have been avoiding eateries during the current health situation. I urge them to get their dumplings for takeout or delivery.

By the way, Formosa really is a bakery with Kao crafting muffins, egg custard tarts in sweet crusts, and sponge cakes in various flavors with whipped cream and fresh fruit toppings.

With spring’s arrival, new dinners, classes and tastings are popping up across the region. Boulder private chef Valerio Castellano hosts a March 14 dinner with live music and four paired wines. Guests help with the cleanup at this private event in Lafayette. lvitaly.com … If you love maple syrup as much as I do, sign up for a brunch pop-up focused on maple syrups from Vermont and Washington at Coperta restaurant in Denver on March 21. copertadenver.com. … Also on March 21: Re-enactors will teach a fur trade-era cooking class featuring bannock, fry bread and pemmican cooked over an open fire at the Fort Vasquez Museum in Platteville. 970-785-2832.

March is Oyster Month at Jax Fish House and Oyster Bar, so you can stop by all month long for deals on the half shell. Buy five half-dozen Emersum oysters and youll get a free half-dozen on the house (plus for every Emersum oyster sold, 10 cents are donated to First Descents, a group that provides outdoor experiences to young adults fighting cancer.) Stop by for buffalo-fried oyster sandos and $5 oyster shooters. Do not, however, make plans to attend the April 2 High West Oyster Fest, which has been postponed due to coronavirus.

For years, when people have asked me where they should go to sample some real Colorado Mexican fare, I’ve had one answer: Trek to the bright yellow El Taco de Mexico shack in Denver’s Santa Fe Arts District. The destination is known for authentic tacos filled with chopped, grilled meats on double corn tortillas with raw onion, cilantro, lime and chile de arbol tomatillo salsa. I always go for the ultimate, a chile relleno-stuffed burrito smothered with pork green chile, and sometimes a couple of eggs. It is quintessential comfort.

Now, the James Beard Foundation is awarding El Taco de Mexico one of its 2020 America’s Classics Awards, honoring restaurants that are an integral part of the community and serve authentic fare. I’m worried people will go there expecting some fancy dining experience.

What you should know is that El Taco de Mexico is a slice of life worth appreciating in all its glory. The ambience at the limited number of seats available consists of watching a crew of these incredible, steely-eyed women whipping out food for people packed in like sardines. It’s a keeper.

“It’s OK to mispronounce things when you order at an ethnic restaurant. It’s OK to ask questions if you don’t know. You don’t have to be an expert in everything, but that doesn’t mean you shouldn’t keep learning.” —  Soleil Ho