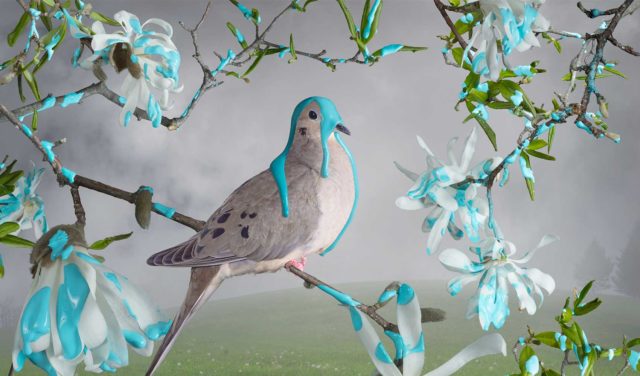 The world of Jason DeMarte’s photos appears familiar at first. You see fauna and flora, vibrantly colored birds and plants in front of cloudy skies. But, with a closer look, something seems off.

In “Invasive Apathy,” pink, textured objects float through the air. Are they strange caterpillars? No, they’re pieces of candy. In “Vanilla Sky,” globs of a thick, white substance sit heavy on the tops of flowers. Is it snow or maybe animal excrement? No, it’s ice cream. In “Corn Syrup Summer”… you get the idea.

Sitting at the intersection of nature and consumer culture, DeMarte’s artwork provokes an uncomfortable question: how have we impacted the environment around us, even in the most subtle ways?

DeMarte intentionally invokes this curiosity with his BMoCA at Macky exhibit Anthrome, showing through Nov. 25. For the name of his exhibit, DeMarte chose a word he came across that means “hybrid human-natural systems that now dominate the Earth’s surface.”

The show spans several years of DeMarte’s career, and showcases other environmental scenes speckled with neon dots along with his sticky, sweet environmental shots. In “Eager Beaver,” a beaver family crawls on their dam, which is spotted with bright blue circles, disorienting the viewer away from the seemingly normal landscape shot. In “Suspended Splendor,” a manatee swims through an ocean cluttered with green circles.

Fascinated by the environment from a young age, DeMarte quickly took to nature photography when his dad gave him a camera at age 12. He realized the power photography gave him to document his experience in the world, showing other people what he saw.

DeMarte went on to study photography and has used it as his main method of artistic expression. The catalyst for Anthrome was his early work photographing dioramas in natural history museums. DeMarte was drawn to the irony of outdoor landscapes set in indoor spaces.

Moreover, he realized the dioramas provided a quick and simple way for museumgoers to consume nature, without experiencing it first-hand.

“There’s an immediate gratification. Instead of going to the top of a mountain to see these scenes, all you had to do was pay for parking and admission,” he says.

Watching people walk between the scenes, Demarte likened it to window shopping, the dioramas basically applying the same models used for advertising and selling goods.

Furthermore, DeMarte was struck by the fantastical creations portrayed by the dioramas, scenes that would probably never exist organically. The natural scenes were transformed into, “an appealing, consumable form, as easily digestible chunks of information,” he says.

Intrigued by this idea, he began pursuing the connection between nature and consumerism further in his own work. Along with shooting in natural history museums, DeMarte took photos in biodomes and around his neighborhood. He then began introducing unnatural products into these nature shots.

All of the elements in DeMarte’s work are real. He takes photos of each object individually, such as birds he sees in his yard, foliage found on his street or extra cake sprinkles lying around the house. Then, he layers the images together to create his final product, uniting seemingly disparate tangible items into a single image.

“With a painting, you can pass it off as the artist’s imagination coming through,” he says. “But I use photography because it has that inherent sense of truth, because it is something real.”

Juxtaposing these elements in a realistic way gives DeMarte the ability to dissect the many facets of human interaction with nature, exploring our overindulgent tendencies and how that affects the way we treat the environment like a commodity.

“We always want more, bigger and brighter. I’ve always been interested in how we genetically modify plants or how we cross-breed plants,” he says. “That’s been going on since we started gardening and farming, this idea of improving on nature to satisfy our own either aesthetic concerns or consumption. [For example], making apples redder and bigger or making tulips brighter and in many different colors.”

To this extent, humans have forever altered nature to create something different all together.

“[The work is an] exaggeration of our capitalistic structure [pushed] to its final degree,” he says. “Where it’s kind of gone awry and where nature is completely impregnated with product. …

While DeMarte’s photos clearly highlight human impact on the environment, he says his work isn’t pushing any one particular message. Rather, he wants his photos to be the start of a dialogue.

“I’m sort of just opening the door to showing this sort of complicated relationship,” he says. “I want to make tableaus that create a sense of inquiry or mystery.”

It all leaves the viewer with an uneasy feeling. While we inherently know the relationship between humans and nature has fused together in an alarming way, DeMarte’s photos capture that unsettling truth. A butterfly doused in ice cream serves as an ominous indication for a future that doesn’t seem too far away.

On the Bill: Anthrome: A Survey of Jason DeMarte’s Work. BMoCA at Macky Auditorium, 1595 Pleasant St., Boulder. Through Nov. 18.