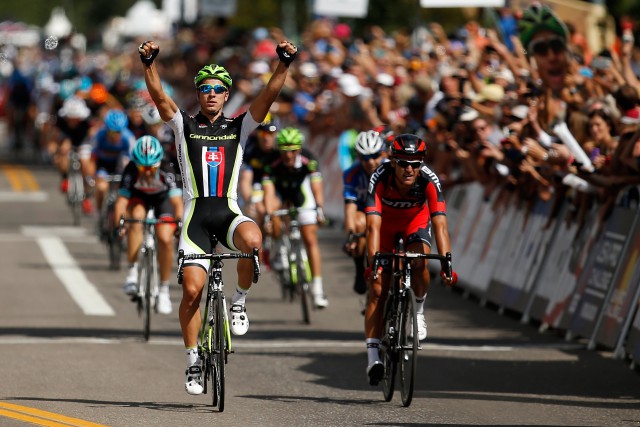 After Americans led the way through most of Stage One of the USA Pro Challenge, a three-rider — and all Colorado, we’d like to note — breakaway group was sucked back into the peloton and last minute shuffling saw Peter Sagan, a Slovakian rider for Cannondale Pro Cycling, surge ahead to win stage.

And then, of course, the audience pleaser known for dying his beard green during the Tour de France, where he finished as the spring jersey winner and points leader for the second year in a row this summer, popped his signature wheelie for the crowds.

“I’m very happy to return to America,” Sagan said at the pre-race press conference on Sunday. “I was here for two weeks before the race and after just two days, I really understood that it’s difficult to race here under these conditions.”

The response from our Colorado contingency was probably the most sportsmanlike possible version of, “No kidding.”

Americans were out front in the first stage of the USA Pro Challenge, with Boulder’s own Craig Lewis taking off early in the stage, followed quickly by Ian Burnett and Matt Cooke. Burnett claims Durango as his hometown, and Cooke is a Boulder resident now.

The trio led the peloton from the first sprint, Burnett taking first, followed by Lewis and Cooke. Cooke (Jamis-Hagens Berman p/b Sutter Home) won points later in the stage leading the way through the King of the Mountain competitions (worth four points each) and will carry the King of the Mountain Jersey into the second stage. Lewis (Champion System Pro Cycling) earned the Most Courageous Rider Jersey to wear into Stage Two.

Team Cannondale, with Sagan, led the peloton, which stayed thickly together through most of the course.

Stage One provided three 22-mile laps of 3,080 feet each for a total of 66 miles and more than 9,000 feet of elevation gain through Aspen and Snowmass Village.

Cooke was in Snowmass to prep for the race as of mid-week before the race started and had ridden the Stage One course multiple times before setting off from the starting line Monday for the race.

“There’s a lot of elevation gain and then also really, really tight corners,” Cooke told Boulder Weekly. “Plus you’re at 9,000 feet and going up these little bumps and you can just barely breathe, so altogether it’s tough.”

Knowing the course well before you race it can be key.

“Course knowledge is a big part of it for physically preparing and mentally preparing,” Lewis says. “You can see how the race is playing out and then pair that with knowing what’s ahead and gauge your effort a little better. If you see guys going nuts at the bottom of a super steep climb, you know things are going to calm down because it’s just not sustainable to the top, so you can kind of plan our your race a little more than everybody else that doesn’t know the circuit.”

The breakaway group was reeled back in one at a time by the peloton in the final 10 miles of the race, and chaser groups saw George Bennett, Sagan, Javier Megias Leal, Ben Jacques-Maynes and Carter Jones and Tom Zirbel jockeying for a place at the front of the line. Boulder’s Jones, riding for Bissell, traded the lead with New Zealander Bennett, who now rides for RadioShack Leopard Trek, toward the finish line in Aspen. Both rode on team Trek Livestrong together before splitting onto competing teams.

The final sprint for the finish saw Sagan spring to the front to take first, BMC rider Greg Van Avermaet behind him in second and UnitedHealthcare Pro Cycling Team rider Kiel Reijnen in third.

“It’s just an incredibly challenging circuit, there’s not a lot of races that start the first stage with something that difficult,” Reijnen told Boulder Weekly in an interview before the race started. The UnitedHealthcare mantra for the year has been “teamwork,” he said, and they’re expecting to draw from a team that’s got a lot of strong riders — three of whom placed well in the Tour of Utah, which finished a week before the Pro Challenge start.

“When you’re up there in the top three it generally means you’ve got a really deep, strong squad where a lot of guys can contribute and play their cards,” he says. “We feel really well prepared for [the Pro Challenge] — and how honored I am to get to race here in my home state. This is really a dream come true for a lot of us. We’re so thankful for the race organizers and the fans.”