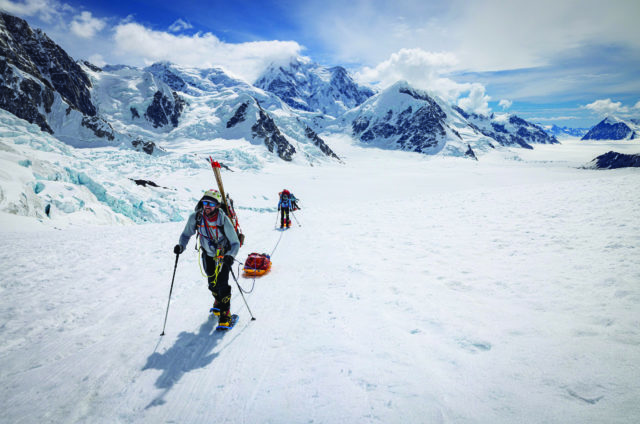 “I should write a song called ‘Crying in my Goggles,'” Ryan Waters remembers muttering aloud as he and fellow Polar adventurer Eric Larsen prepared to cross a gap between Arctic ice.

It’s Day 53 of Waters and Larsen’s 2014 ski expedition to the North Pole, and the two are a single day’s push — just three miles — from the Pole when they come upon another break in the Arctic shelf, a floating platform of ice that forms where continental ice meets the sea. These breaks have become more and more prominent as Earth’s climate has warmed, pushing huge glaciers into the sea, increasing ocean levels and slowly drowning coastal cities across the globe.

Waters and Larsen — who both call Boulder home these days — have taken turns stripping down to wet suits and swimming between these gaps in the ice while pulling the sleds and their fellow adventurer. Now it’s Larsen’s turn to swim and Waters’ chance to float. On the opposite side, Larsen struggles to pull himself onto the shelf. After multiple tries, he finally beaches himself on the ice.

The duo launched their trip at Cape Discovery on the northern coast of Canada, packing two sleds weighing over 300 pounds each. Over 53 days, the pair endured temperatures as low as minus 58 degrees Fahrenheit, pressure ridges in the ice as high as 12 feet, and polar bears lurking around the arctic tundra.

The final three miles took a grueling eight hours, but upon arriving at the North Pole, Waters became the first American to complete the True Adventurers Grand Slam. To join, an adventurer must climb the Seven Summits — the highest mountain peak on each continent — and ski unsupported (no resupplies or outside help) and unassisted (no mechanical, wind, or guide help) to both of the Earth’s poles.

It’s been seven years since Waters and Larsen completed their Arctic expedition, giving Waters time to reflect on his accomplishment in his recently released book, An American’s Grand Slam, A True Adventurer’s Unlikely Journey (out now from Falcon Guides).

Part adventure story, part memoir, Waters details his transformation from a high school football player who craved time in the outdoors, to his desk job as a geologist, to become an assistant climbing instructor for Outward Bound in North Carolina, to his trips to the North and South poles and conquering the Seven Summits. He’ll speak about his adventures at a book reading at Boulder Bookstore on Nov. 10.

Waters remembers dreaming about climbing mountains on the first day of his final physics class at Ole Miss. He found himself unable to focus on the lecture, transfixed on the notion of scaling a towering, snow-covered Himalayan peak called Pumori — “daughter mountain” in the Sherpa language. Waters made a promise to one day visit the mountain and climb its “graceful slopes.”

Waters graduated with a degree in geology and took a job in Atlanta working as an environmental consultant. After three years there, he applied for a job with Outward Bound in North Carolina.

“That was the literal moment I felt the direction of this life begin to take a significant turn,” he writes in his book.

Waters worked at Outward Bound in North Carolina for a year and then landed a job with the company working in Patagonia. Before heading to South America, Waters took every opportunity to get out and climb, whether it be on the soaring mountains of Wyoming or the sandstone boulders of Horse Pens 40 in the Appalachian Mountains of Alabama. In the wild and pristine environment of Argentine Patagonia,Waters honed his skills moving across rock, snow and glaciers.

“When I started working in South America it was a big experience,” Waters says, “because I was not only instructing people but I was working with other instructors who do it a lot …and learning stuff from them.”

In 2007, while a part of an expedition aiming for the summit of Cho Oyu, a Tibetan peak that ranks sixth-highest in the world, Waters met Norwegian explorer Cecilie Skog, who had completed the True Adventurers Grand Slam. The two became friends and on a visit to Boulder, Skog mentioned the possibility of crossing Antarctica. Waters jumped at the opportunity.

“I do consider myself a mountain climber first,” Waters admits. “The polar stuff camealmost by accident by running into these people in these circles that I was in. It’s not like you’re just going out cross-country skiing in Colorado. It’s remote. There is a challenging environment. There are a lot of different skill sets that I didn’t know about. So once I agreed to [cross Antarctica with Skog], I had that feeling like, ‘Shit, now I gotta actually figure this out.’”

Waters and Skog skied across Antarctica in 70 days in 2010, covering 1,117 miles from Berkner Island to the South Pole, completing their journey by skiing to the Ross Sea.

“The conditions and thin ice make it much harder now than in the past, which is a major hurdle in itself,” Waters says. “Equally important, the company that used to support the flight options from Canada has since decided to no longer support expeditions to the North Pole due to the challenges presented by thinning seasonal ice. So it is kind of a bittersweet thing to have potentially done what could stand as the final trip in this fashion.”