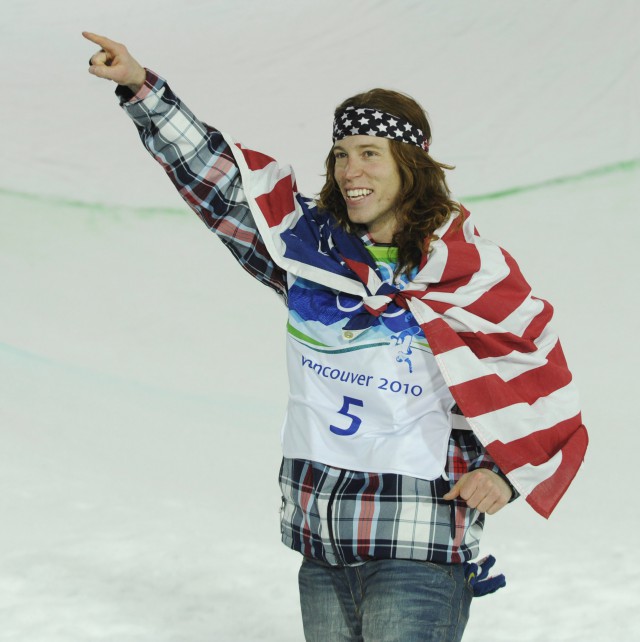 — would have won the gold medal without his most daring trick, the Double
McTwist 1260. But the American snowboarder had to do it.

“I just felt like I didn’t come all the way to
Vancouver not to pull out the big guns,” White said. “I put down the
tricks I’ve worked so hard on. It was the savvy thing to do. Saucy.
Keep it weird.”

White replaced the Double McTwist 1260 with a safer
backside 900 on his first run and still scored a 46.8 out of 50, which
was good enough for gold in the halfpipe. But he wanted more, and he
got it on his “Victory Lap” with one of the most memorable individual
performances in Winter Olympic history and a score of 48.4 from the
judges.

“I wanted a Victory Lap that would be remembered,” White said. “I guess I achieved that.”

White’s gold and bronze in the halfpipe capped off a history-making day for their
country. Until Wednesday, the U.S. had never won six medals in a single
day at a Winter Games.

Snowboarding has come a long way in the four years since White won in with back-to-back 1080-degree jumps. With the halfpipe now at 22 feet, riders can perform even bigger tricks.

And no one in snowboarding is bigger than White, one of the biggest stars at these Olympics.

, one of White’s primary sponsors, built White his own private halfpipe last year. Project X, as its known, is in the and comes complete with foam padding for soft landings.

In January in ,
White unveiled the Double McTwist 1260. The trick, which involves 31/2
twists and two flips, has left White with an injured ankle and nearly a
broken jaw.

He broke more boards than bones while perfecting the
sport’s most difficult trick, which White has nicknamed “The Tomahawk.”
Keene estimates White now has successfully landed a trick 25 times.

“He is very brave, of course, but he’s also very
good,” Keene said. “It was something he developed because he was
feeling challenged by some other riders in the world, particularly some
American riders. He wanted to go into the Olympics with the ability to
win the contest hands down. He felt that the Double McTwist 1260 was
the ace in the hole.

“As it was, he didn’t actually need it, but he did it anyway.”

White had won four of five Olympic qualifiers, and
he won the X Games in January an hour after a horrific practice crash.
He showed again Wednesday that when he is at his best, no one can touch
him.

“Tonight, I basically pulled out all the stops on
the last run and did something that’s never really been done before,”
White said.

Waiting might have been the hardest part for White.

Riders get two trips down the chute in the halfpipe
final, with only their best score counting. So, after his first run,
White had to bide his time as the other 11 finalists took their second
runs.

“There was a massive gap in the points,” White said.
“I was standing on top, feeling confident, but I didn’t want the
celebration to kick in.”

The celebration began when Lago fell on his second
run, leaving no one else standing. White consulted with Keene, who
encouraged White to go for it.

White had wanted to do the Double McTwist 1260 on his first run, but he knew he probably didn’t need it to win. He was right.

But he wanted to give the raucous Cypress Mountain
crowd of 4,400 what they came to see. After he completed his second
run, White threw his board in the air.

White, 23, has yet to realize he’s already done that.

Visit the on the World Wide Web at http://www.star-telegram.com.