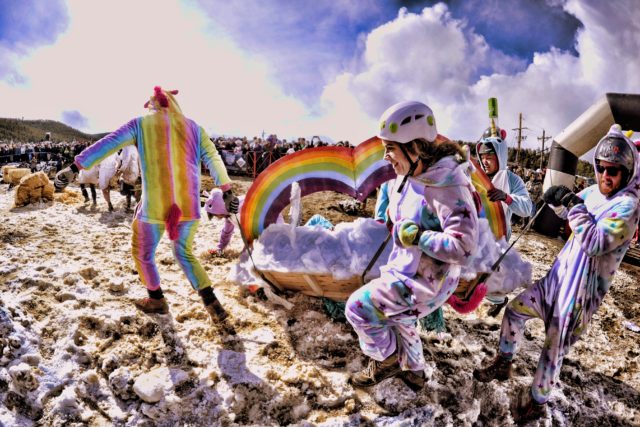 There was a time, about a year ago, when Frozen Dead Guy Days was on life support.

Even though Bredo Morstoel, Nederland’s most famous resident, was still dead and frozen on dry ice in a Tuff Shed in town, the refreshingly weird winter festival hit a crossroads. Event producer Amanda MacDonald faced budget pressures and exhaustion. “It wasn’t officially deceased, but I had been doing Frozen Dead Guys Days (FDGD) essentially by myself since 2012,” MacDonald says.

At this point, feel free to make your own Frozen film references, but she — and the Town of Nederland — couldn’t let FDGD go.

To the rescue, physically and financially, rode Nederland’s Sarah Martin as a new majority owner. “Sarah had been part of the event for a while, especially the music. Now we’ll be able to continue all the events, and Sarah really wants to elevate the festival to a new level,” MacDonald says.

When FDGD started, George W. Bush was in the White House, Jimmy Carter won the Nobel Peace Prize and fires burned 100,000 acres of forest in Colorado. That was in 2002, and a few hundred folks gathered in Nederland for a hearse parade and casket races at the inaugural FDGD. Then the fascinating documentary, Grandpa’s in the Tuff Shed, came out and won awards. The festivities started popping up on national television and the spotlight turned the slightly macabre gathering into an annual tradition.

Now it’s a three-day bash attended by 20,000 people and includes over 30 bands playing into the night inside three large heated tents. Part of downtown Nederland is turned into a pedestrian mall with street performers and a dozen food trucks. Attendees and participants alike dress in costumes, and you always seem to find a cadre of zombies staggering around town.

This year, FDGD kicks off March 13 with the Blue Ball, a gala featuring live music, a costume contest and a silent disco until 1 a.m. Bright and early on March 14 and 15, pancakes, eggs, sausage, yogurt, fruit and more are on the table at the Community Breakfast.

The afternoons include the marquee attractions. There is a colorful parade of coffin racers, featuring diverse styles of hearses, followed by Snowy Human Foosball — that’s a foosball game played using teams of six people. During the famous Coffin Races, competitors slog through an unpleasant obstacle course, wet and messy. There is even a special award for the team that suffers the worst snafu on the race course.

Other kinds of fun on the schedule include The Newly Dead Game: Couples Edition, Frozen Turkey Bowling, an ice carving exhibition and the popular beard and mustache competition.

The schedule includes almost constant showings of Grandpa’s in the Tuff Shed. The film helps explain to newcomers and curious visitors from foreign lands how this unique event grew out of an ill-fated effort to achieve suspended animation and, potentially, human reincarnation.

Not that they are life-threatening, but FDGD famously features several activities that all require signed legal waivers in order to participate. It may have something to do with the fact that some of them may be frowned upon by the Geneva Convention.

The painful activities range from the Frozen Salmon Toss to the Brain Freeze, a slushie-downing competition that is excruciating to even think about. Discomfort is a given during the Polar Plunge, where costumed participants jump, in full costume, into an ice-filled pool. In Frozen Fix-A-Flat, competitors plunge their hands for a full minute into ice water and then try and fix a flat bike tire with numb digits.

Planning to attend FDGD? MacDonald recommends wearing clothing in layers. It’s also wise to be aware of the transportation realities. “In the middle of March, Boulder Canyon will still be under construction. That weekend there are limits to parking availability in the town of Nederland. We hope everyone uses RTD and Bus to Show instead,” she says.

The newest activity scheduled for 2020 is neither painful nor requires a signed waiver. The Frozen Dead Poet Slam is a semi-bawdy limerick contest that invites rhyming odes to Bredo. (For example, “There once was a man named Bredo, who lived in a Tuff Shed incognito …)