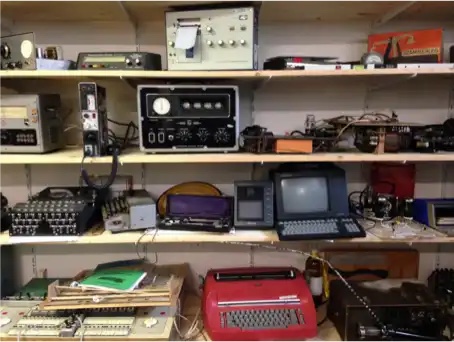 Rather than keeping up with the newest tech, MAL collects still-functioning tech from the past to help think about an alternate present and future—and you can visit it.

MAL, crammed into the basement of the Grandview Cottage on CU Boulder’s campus, has a serious collection of old technology. The lab has acquired old tech from phonograph players, magic lanterns and historic personal computers to handheld devices and game consoles like the Altair 8800b, Commodore 64, Apple lle and more.

According to its website, MAL’s collection of functional media could be one of the largest in the world.

Lori Emerson, founder and director of MAL, says the lab exists for a variety of reasons.

“It’s there to be used by artists to create art using old tech,” she says. “It’s there to educate people of all ages about how strange and varied the history of tech actually is. It’s also there to show people how things used to be in the world of technology and how they could be different in the future.”

It functions as an open space for creativity, research and experience-based learning.

The lab’s community of staff members, volunteers, students and faculty work to preserve and maintain this technology. Unlike a museum, Emerson says you can’t really understand a piece of technology just by looking at it.

“The lab is also about play and giving people a space where they can just freely delight in all these interesting pieces of technology,” she says.

MAL also uses its collection of tech for cross-disciplinary experimental research and teaching—much of which intertwines with Emerson’s own research.

Prior to founding MAL, Emerson’s background was in experimental poetry and digital poetry. When she discovered a poem called First Screening by Canadian poet bpNichol that was distributed on 5-and-a-half inch floppy disks, she began to wonder what difference it would make to access the poem through other platforms.

“So I started what I called then the Archaeological Media Lab and filled this tiny room on campus with about a dozen Apple lle computers,” she says.

She began branching out to investigate other differences between devices like the Commodore 64, the computer comparable to the Apple lle at the time. Soon, the lab grew into a collection of “so-called obsolete tech” and MAL was well underway.

Emerson was not an expert in the history of computing prior to founding the lab. Now, Emerson focuses on uncovering “crisis points” in past media where there was the possibility to create a technology that’s different from what we have now. She uses past tech alternatives as a way to reimagine alternatives in the future.

This research has led Emerson and MAL to uncover some big questions. Emerson tries to expand visitor’s senses of what could be.

“We’re always told that computers from the 1970s and 1980s were slow or big or clunky or inefficient,” she says. “But what if there’s some value in slowing down? What if efficiency isn’t as important as longevity?”

Boulder might be the perfect place for MAL to exist. Hobbyists, tinkerers and people in the booming tech industry often visit the lab. Emerson says that people’s eyes light up as they gravitate toward the machines they used as kids, like the eMac or Apple Macintosh. Many see the lab as a custodian of history.

MAL also prides itself on being open to anyone. Visitors can stay and hang out in the lab as long as they want. This inclusive space has helped build both a local community and one around the world.

After experiencing the lab, Emerson hopes visitors “see all these incredible pieces of technology from the past as offering up ideas for how we might do things differently or even better in the future.”

This fits the MAL’s motto: “The past must be lived so that the present can be seen.”