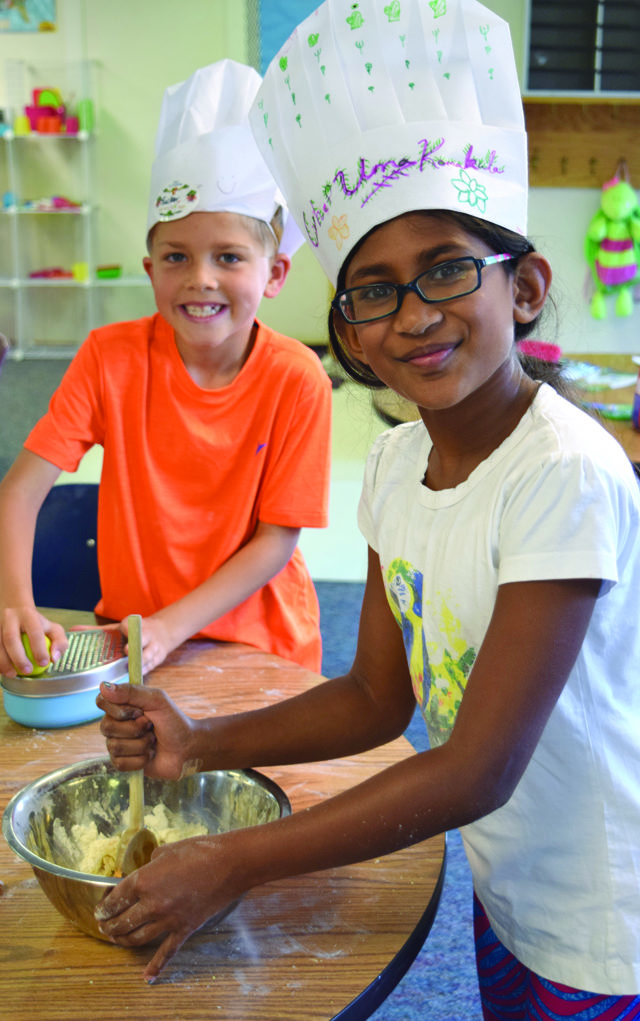 The first time you watch your 7-year-old cut a cherry tomato with a knife by themselves, you hold your breath and resist the urge to help.

When your kid is learning how to slice — not to mention sauté over flames and roast in a 375-degree oven — at a Food Lab summer camp, you learn to exhale and exit the building. Girls and boys are taught to dry off the slippery tomato and hold it with a “bear claw” so their fingers are away from the sharp blade of a French knife.

Downtown Boulder’s Food Lab hosts summer cooking camps for kids May 28 to Aug. 9. The Monday through Friday morning or afternoon sessions focus on a specific cuisine or skill with weeks devoted to Mexico and Beyond, Asia, Italy and Baking.

The current generation of Boulder kids are far more food-savvy than their moms and dads at the same age. “They have traveled more and eaten at ethnic restaurants. They’ve also watched a lot of the cooking and food competition shows on TV,” says chef Casey Easton, owner of Food Lab.

She stresses that all camps are open to children 6- to 12-years-old with no cooking skills required. Activities are sometimes divided by age but the kids mingle and eat together. “The older cooks learn how to help the younger ones,” Easton says.

These camps are interactive and not watch-and-be-fed cooking demonstrations. Every camp and cuisine requires a variety of skills, including dough work, knife skills, sauté, baking and roasting. Older kids get to try more advanced techniques.

During the camps there is a strong emphasis on safety, hand washing and especially kitchen etiquette. “One of the things we stress with the campers is that the kitchen is an adult environment, not a place to play,” she says.

Every camper dons an apron and sets up at a cutting board. They get a step stool if they aren’t tall enough to reach. Each group of campers receives a tray of ingredients, grownup tools and spices for each dish they are making.

Campers have fun learning what thyme smells like, how to microplane a garlic clove or chiffonade basil, what fresh mozzarella tastes like and what happens when you cook bread cubes in butter. (Basically, serious yumminess results.)

Easton hadn’t originally planned on offering kids summer cooking camps but they have only gotten more popular since Food Lab opened three years ago. Some kids attend for multiple weeks.

“Baking is probably the most popular camp. It includes quick breads, cornbread, brownies, crepes and take-and-bake pies. The parents are a little less excited about the mess it creates at home,” Easton says. But then, that’s the point. The kids want to come home and try to cook.

At the conclusion of every daily session and sometimes halfway through for a snack, the campers serve whatever they are making on china dishes with real silverware. They are taught to plate the food so it looks tasty. Most importantly, everybody sits down to eat together after the collective effort.

“The big thing parents tell us is that the kids tasted this food or tried this dish that they never would have if they didn’t go to camp,” she says.

Easton reports that some summer campers have graduated to Food Lab’s adult classes.

Not every camper will become a chef or end up on Chopped Junior on the Food Network. Kids do start helping in the kitchen, and parents like the camps because cooking skills are the kind that stay with you the rest of your life. Kids learn where food comes from and gain the satisfaction of feeding other people.

Parents should note that just because their offspring spend the summer learning how to cook, it doesn’t mean they’ve absorbed the lessons about cleaning up after themselves, according to Easton. “We have everyone help but some kids are better at that part than others. It takes time,” she says with a laugh.