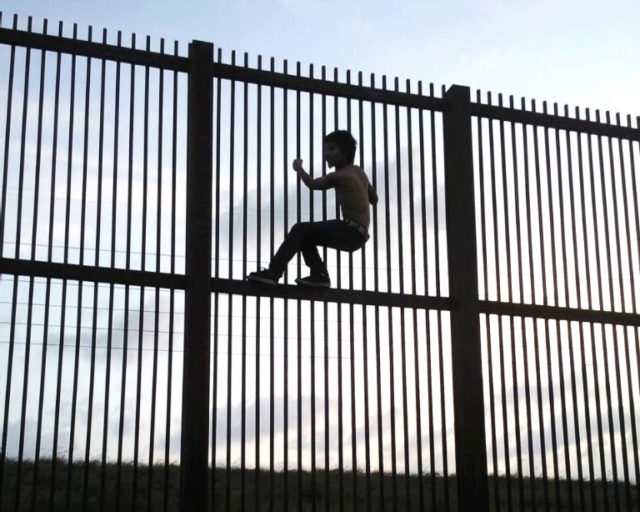 It’s a question I’ve been asking myself a lot lately, thanks to the Trump administration’s war on immigrants. It was bad enough during the campaign when Trump’s racism was limited to his really big, best words ever, but now that his hateful discriminatory rhetoric is being turned into actual policies, it’s far worse.

None of us should be able to sleep at night. Unfortunately, the polls tell us that 38 percent of us can.

I’ve lost track of how many local families we’ve covered as their worlds have been torn apart by seeing a mom or dad or brother or sister or child deported. I should point out that most of this cruelty was dispensed at the hand of Barack Obama and his band of Democratic Party hypocrites, but there can be no doubt that the current situation under Trump has intensified the pain for millions of our neighbors.

With one wave of his tiny hand, Emperor Trump recently disrupted the lives of 800,000 of our nation’s best and brightest, aka the dreamers. And yes, I did mean to say “our nation’s” because the U.S. is basically the only home the dreamers have ever known and, it is the place where they hope to contribute with their many talents.

When Trump killed DACA for no reason other than appeasing his base of racist supporters, he sent a wave of fear washing over the lives of millions of people who make our country better by their presence. And that is only his most recent assault on immigrants.

Under the guise of going after the “bad hombres” (sorry, I can’t write those words without stopping to point out what a complete jackass Trump is) the president is intentionally terrifying 11 million of our neighbors. His aggressive policies and full-throated support for allowing law enforcement of every ilk to check the documentation of every brown person they stumble across is wrong and dangerous.

Would you sit idly by and watch your mom be sent back to a country where she may not know anyone, doesn’t have a roof over her head or a way to support herself? Would you be willing to raise your kids without their father just because Donald Trump and a bunch of scared, under-educated white people said you had to? Could you look on quietly as you watch your children’s hard-earned dreams of a college education and a good career be transformed into the daily fear of deportation and a lifetime of underpaid labor? Could you?

I didn’t think so.

Then why should we expect anyone who loves his or her family the same way we do to go quietly down that path? They won’t, and I don’t think they should.

I had a long conversation with a leader of the Brown Berets earlier this year concerning this very topic. I asked him, “When will enough be enough?” I feel like now is the appropriate time to share his answer.

He had recently attended a large gathering of Brown Berets in California where the main topic of conversation was what to do if Donald Trump actually starts conducting the mass deportation of Latinos. He told me, “We won’t let that happen. We all committed to protecting our people at all cost.”

Let that last part soak in, “at all cost.”

Once again, the old Harry Truman quote seems appropriate here: “The only thing new in the world is the history you don’t know.”

For many of us, the last time the Chicano Movement grabbed our attention was in the 1960s and ’70s. By 1974 the nightly news was filled with images of Cesar Chavez, farm worker strikes and protests and the aftermath of bombings. That is the history we seem to have forgotten or never even knew.

Imagine that in beautiful Boulder, Colorado, six bombs exploded in just the first five months of 1974. Schools, the campus police station and the courthouse were all targeted. The last two bombings claimed the lives of six young Chicano activists. To this day Los Seis de Boulder are considered martyrs of the movement and the answer to who is responsible for their deaths remains a mystery. The Brown Berets were also part of that movement and more of the history we don’t know.

Here’s another news flash: The Chicano movement never went away. It simply evolved. By the late ’70s it had been so successful that much of its early militancy was no longer needed. Its leaders were being elected to political office and its demands for equal education for Latinos had at least been heard and acted upon if not realized completely.

So again I ask what you would do under the current circumstances if it were your family being threatened?

What would you do if you saw 50 years worth of hard-won political gains  — gains paid for in blood and imprisonment — being rolled back by an ignorant, white supremacist president and his anti-immigrant followers? Would you choose to live out the rest of your life watching in fear as your family gets picked off one at a time by racial profiling? Could you live with knowing you could lose your livelihood or a loved one at any moment just because they were in the wrong place at the wrong time? Or would you fight back? And what exactly does fighting back mean?

We should all hope we learn the lessons of history so we never again have to relearn the answers to those questions. The bomb is once again ticking, but there is still time to defuse it.

There is still time for Congress to address immigration reform in a serious way. There is still time to create a pathway to citizenship for the 11 million undocumented people who live as our neighbors and who make America great every day by their hard work and cultural contributions.

I think I know what I would do, how about you?