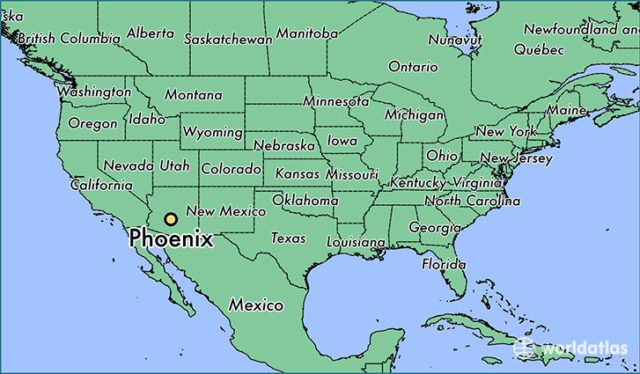 On May 12, the planet’s atmosphere hit one of those “grim milestones” we hear so much about.

According to data from the Mauna Loa Observatory in Hawaii, the concentration of carbon in the atmosphere topped 415 parts per million (415.26 ppm, to be precise), which is higher than it has been at any time in the last 800,000 years. Higher than it’s been since our ancestors came down out of the trees and declared themselves a separate species.

“We don’t know a planet like this,” said Eric Holthaus, a meteorologist and climate columnist for the online magazine Grist.

“This is the first time in human history our planet’s atmosphere has had more than 415ppm CO2,” Holthaus tweeted. “Not just in recorded history, not just since the invention of agriculture 10,000 years ago. Since before modern humans existed millions of years ago,” he added.

The 415.26ppm figure was a one-off daily reading, but over 415ppm readings seem on track to become the new normal.

No doubt about it, annual atmospheric CO2 increases are on a tear.

But how is it, then, that Maricopa County, Arizona, which includes most of the Phoenix-Mesa-Scottsdale metropolitan area, was the fastest growing county in the country — for the third year in a row?

But how can this be? Phoenix is hot as blazes in the summer. According to the Wikipedia entry on the place, the city gets 3,872 hours of bright sunlight a year, the most of any major city on the planet. Average high temperatures are the hottest of any major city in the U.S. On average, there are 107 days a year with a high of at least 100 degrees Fahrenheit or more, and 18 days with highs of 110 degrees or higher.

And it’s been getting hotter over the last 30 or 40 years, not so much from global warming but from the heat island effect — which is when asphalt and structures soak up heat during the day and release it at night. The larger a city gets, the warmer it stays at night, which runs up its overall average temperatures.

You have to wonder if the city is going to get so hot that its uninhabitable.

So just how hot might Phoenix get by the end of the century? That’s where an on-line interactive map produced by the University of Maryland’s Center for Environmental Science comes in. It was created using three massive data sets that allow it to show graphically what the average temperature and precipitation in 540 American cities are today (what they were between 1960 and 1990 actually) and what they will most closely resemble in 2080.

For instance, assuming CO2 continues to increase at current rates, New York City will feel more like Jonesboro, Arkansas, the San Francisco Bay Area more like Los Angeles, and LA more like the tip of Baja California. The map also shows what the climate will be like if CO2 emissions are dialed back.

(The map can be accessed at fitzlab.shinyapps.io/cityapp/)

For Phoenix, assuming CO2 continues to rise at current rates, the city it will most closely resemble in 2080 is Esperanza, Mexico today (Esperanza is just north of Ciudad Obregon, inland from Mexico’s west coast.) And — surprise — the typical summer in Esperanza is 0.7 degrees cooler and 165 percent wetter than current summers in Phoenix.

Given the kinds of ferocious temperatures Phoenix experiences today, never mind what they might be in 60 years, you would think people would be fleeing the place for North Dakota instead of moving there.

But they keep coming anyway. Maybe they think a hotter, sunnier climate is a feature, not a bug. Maybe a lot of Americans in other places — like Buffalo, Cleveland and Chicago — are thinking the same thing about climate change. And maybe, as the Phoenix-Esperanza connection suggests, the changes that higher CO2 levels in the atmosphere will bring won’t be quite as apocalyptic as they are usually made out to be. And maybe we should have a conversation about all that before we buy into a green new deal.

this opinion column does not necessarily reflect BW’s views.