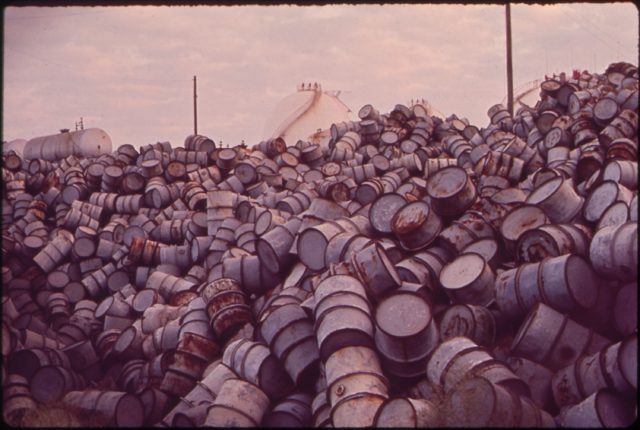 As hopefully everyone has heard by now, proponents of Initiative 97, the 2,500-foot oil and gas setback initiative, turned in 171,000 signatures to the Secretary of State’s office on Monday, Aug. 6. Since only 98,482 valid signatures from Colorado voters are required to put the initiative on the November ballot, it would seem that even with the oil-industry-backed Republican Secretary of State Wayne Williams trying his best to scrutinize and disqualify every signature possible for his industry pals, we will likely be voting on Initiative 97 in three months.

Here’s something to remember as we all prepare to be inundated by tens of millions of dollars of oil industry advertising falsely claiming that drilling oil wells and producing hydrocarbons only a few feet away from homes and schools and water supplies is perfectly safe: the oil industry constantly lies and prioritizes its profits over your family’s safety.

Seriously, here are a couple of examples just from the last few days to prove my point.

So you may have heard about the tanker truck that crashed in Poudre Canyon. You know, the beautiful, ecologically priceless canyon through which one of Colorado’s last wild rivers flows. Well, it was first reported that the toxic brew spilled from the truck was produced water. That would have been bad enough. Produced water is the stuff that comes out of a producing well and contains water contaminated by radiation, mercury and other heavy metals, plus a lot of  salt.

But a week after this accident, based on some good reporting from The Coloradoan’s Jacy Marmaduke, we find out that our state’s oil industry regulator, the Colorado Oil and Gas Conservation Commission (COGCC), isn’t actually sure what the truck was carrying or what the crash spilled into the river. The COGCC is now saying the truck may have been hauling unused fracking fluid. Let me translate that: It may have been carrying a toxic stew of deadly chemicals that are so incredibly dangerous that the oil industry has spent millions on politicians just to assure that it doesn’t have to tell the public all the cancer-causing chemicals in fracking fluid. This, of course, is because the industry knows that if we knew, we would stop them from drilling anywhere near where people live and work.

But back to the Poudre River spill.

But more concerning is the potential impact on the downstream water supply. According to The Coloradoan, Fort Collins Utilities says it saw no water quality impacts at its Poudre River intake after the spill. That’s just great except for one thing: Because no one at the COGCC  and therefore anyone at the utility knows what deadly chemicals were spilled, it is impossible for the Fort Collins water supplier to have known what chemicals it should be testing for. Therefore its claim that everything is fine with the water appears to be based on its efforts not to panic its customers rather than some careful testing for the hundreds of toxic chemicals known to be used in fracking fluid.

The other recent development showing the industry’s lack of concern for truth and our safety can be found in a new lawsuit against Anadarko Petroleum filed last week by the company’s own shareholders.

The claims being made by Anadarko shareholders are shocking. The suit alleges that Anadarko knew that hundreds of its wells were dangerous to the public even before the explosion in Firestone last year that killed two men and badly injured a young woman. The suit says Anadarko executives made the decision to cut millions of dollars in its budget designated to repair or plug the old dangerous wells in order to save money, keep drilling and only repair profitable wells.

The suit put it this way:

“After oil prices collapsed, Anadarko reconsidered its commitment to safety. It slashed the remediation budget. What was left of the budget was spent remediating Noble Wells that were either good producers or whose poor condition interfered with Anadarko’s drilling schedule. Anadarko did not consider safety threats in determining which few Noble Wells to remediate, even though many of these wells were located near houses or schools.”

And, “Because Anadarko wouldn’t know where to look to see if its flowlines and pipelines were severed and didn’t check to see if they were, an explosion was inevitable. Senior Colorado Anadarko executives were well aware of these safety issues.”

The incidents I’ve cited above don’t even take into consideration the mountains of research that has been done in the last five years showing that living near oil and gas operations severely increases your health risks in a multitude of ways from cancer to birth defects to serious respiratory illness.

So, assuming it makes the ballot, be sure to vote for Initiative 97, and remember the industry’s long history of lying to us when considering its advertising messages.

And I just have to toss this one in. The “oil and gas industry” is now actively attempting to rebrand itself as the “natural gas and oil industry.” It would be funny if it weren’t so sinister. The purpose of this rebranding is to better align the perception of this dirty industry with the false claims of the establishment Democrats and the Big Green environmental groups who say natural gas is a part of the solution for global warming despite all the research to the contrary. So who can you trust? Just remember the term “clean energy” is code for natural gas with a few renewables thrown in to greenwash it.

Be on your guard my friends. It’s getting messy out there.