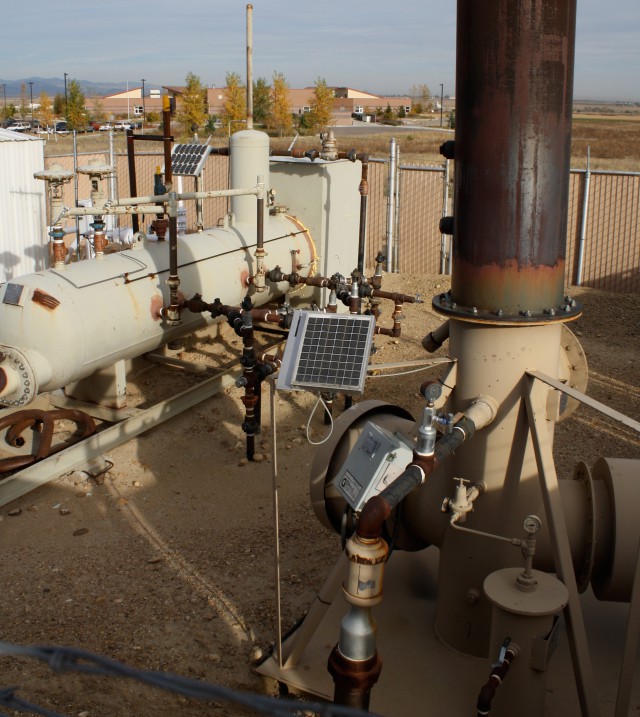 Boulder County’s northeast shoulder is about to get fracked. Again.

Hydraulic fracturing, also called “fracking,” has become nationally known due to environmental concerns about the chemicals that mining companies use when shooting their high-powered liquids deep into the earth to extract oil and gas. The practice has attracted scrutiny because of the possible effects those chemicals can have on groundwater.

But despite some local residents’ environmental concerns, companies that have mineral rights — and leases to drill for those minerals — seem to have carte blanche to extract the oil and gas beneath the surface, even when it lies under sensitive natural areas like Union Reservoir in Longmont.

Two companies — Cougar Land Services and the TOP Operating Company — are in talks with Longmont officials about how to exploit what is known as the Wattenberg oil field. That field stretches northeast from Boulder County, is about 35 miles wide, and is bordered on the south by the Denver metro area and on the north by Highway 14.

Oil and gas companies already have mineral rights and leases all over Weld County, and that area has become a hotbed of mining activity, as drilling equipment has become almost as common in housing developments as swing sets.

He estimates that there are probably 110 producing oil and gas wells on county open space, and he says the fracking method is used whenever a new well is drilled — and even sometimes when old wells are not producing enough. Adeletti says there have been probably 20 to 25 new wells drilled on county open space in the past five years. But all of those are occurring due to pre-existing leases; the county does not enter into any new leases on its open space properties.

“In general, I would prefer that we weren’t doing oil and gas drilling,” says Boulder County Commissioner Will Toor, “but we’re sort of stuck with what we’re stuck with.”

Cassie Kearney is concerned. The Firestone resident has noticed drilling rigs popping up all over her community in recent years, even next to schools and playgrounds, and their squat, chimney-like pipes periodically belch black smoke.

Coincidence or not, many of her friends and relatives have been contracting illnesses, from her father’s lung cancer to a friend’s child whose teeth began falling out. Another child began stuttering, and some children have started to get headaches. Four women have serious thyroid problems, and another friend has been diagnosed with the early stages of multiple sclerosis. Kearney acknowledges that the ailments may not be connected with the fumes she has seen rising from nearby mining operations, but she is worried nonetheless.

“You can explain it all away,” she says, “but it’s concerning. … Prove me wrong. I’d like to be wrong and go on and do something else with my energy.”

She gives a tour of the myriad oil and gas rigs that keep popping up in the tri-town area of Firestone, Frederick and Dacono.

As someone who recently lost her job as a paraprofessional with Prairie Ridge Elementary School, Kearney says she appreciates the fact that new oil and gas extraction brings employment. But she also has two kids in Firestone schools, ages 15 and 17.

“I’m unemployed,” she says. “I’m all for jobs — just make sure there’s clean air in the process. … I’m worried about my kids’ future.”

In the Firestone area, one can see fumes above the pipes distorting the view of the blue mountains in the distance, even when there is no black smoke.

There are drilling operations next to Coal Ridge Middle School, Centennial Elementary, Legacy Elementary School and the Imagine Charter School, all documented prominently at WTFrack.org.

“There’s another one in the back of our subdivision, next to the dog park and the kids’ park,” Kearney says.

Kaye Fissinger is chair of Longmont’s Board of Environmental Affairs (BEA). She agrees to talk on the record only after making clear that she is speaking as a local environmental activist, not in her capacity as chair of the board.

Fissinger’s board heard a presentation about the proposal to drill on Longmont open space on Oct. 19. She complains that the group was not included early enough in the process.

“This has been in the works since June, and we’re just getting a heads-up now,” Fissinger says. “I’m concerned about this two- to three-month timeframe. It looks to me like it’s being railroaded through the process and it’s all window dressing.”

There isn’t much that the city can do to stop TOP Operating, the Lakewood company that holds leases to access its wells around and beneath Union Reservoir, she explains.

“We can’t stop them from drilling. All we can do is mitigate the potential disasters that could occur,” Fissinger says.

A map of the area shows that TOP owns a symmetrical grid of more than 40 well sites under Union Reservoir. They can access those wells without setting up facilities in the middle of the water by erecting drilling platforms along the shore of the lake, boring down, then drilling at various angles under the reservoir to tap into the oil and gas.

In a request that is separate from TOP’s negotiations with the city, Cougar Land Services is asking the city to allow seismic surveys on behalf of the Anadarko Petroleum Company, and would pay the city $7.50 per acre for the right to survey. The two surveys would generate $13,722 for Longmont’s coffers.

Fissinger is opposed to granting the requests.

“Why would we want to allow seismic surveying, which would facilitate even more drilling over the next 10 to 15 years?” she asks.

At the very least, she says, the city should insist on “green completion” — when oil and gas companies are required to restore land to the exact state in which they found it, once drilling operations are complete. Fissinger says the city should also ensure that the companies put a tracer in their fracking fluid that can be detected in future groundwater tests, so that the corporations can’t deny responsibility if water is contaminated by the fluid. She also wants to know where the companies are going to get the millions of gallons of water required for fracking, and where the chemical-infused wastewater will be disposed of once it comes back up.

Officials from Cougar, TOP and Anadarko did not return calls by press time.

Dale Rademacher, director of public works and natural resources for the city of Longmont, says the seismic survey request and TOP’s drilling plans are making the rounds to the city’s advisory boards, including Fissinger’s BEA, the Water Board and the Parks and Recreation Advisory Board. He says the seismic survey request will go to City Council before the end of the calendar year, while the TOP negotiations lie in the hands of the Planning and Zoning Commission, which will likely decide in December whether to issue the conditional use permit required for TOP’s drilling.

He expects the various advisory groups to raise questions about the impacts associated with the drilling, because fracking is a hot topic right now.

“Their advice to the council, I’m anticipating, is going to typically be, make sure we protect the environment, make sure we do this in a very responsible way,” Rademacher says. “I doubt anybody’s planning to drill in the middle of Union Reservoir.”

But when it comes to TOP’s rights, he adds, the best the city can hope for is to consolidate the drilling sites to a limited number of locations.

“Right now, the lease-holder, say it’s TOP, they have the right to drill,” Rademacher says. “What we are simply trying to do is come up with a consolidated drill site. We are not trying to dictate the method under which they drill. It’s outside of our purview.”

He says hydraulic fracturing is regulated at the state level, by the Colorado Oil and Gas Conservation Commission (COGCC), not at the municipal level.

“It’s my understanding that virtually all of the wells in the Wattenberg field require hydraulic fracturing to access the oil and gas, but we don’t regulate that,” Rademacher says.

And he says fracking is not necessarily a new thing on city-owned lands, citing existing drilling operations on the Sandstone, Bogott, Hartman and French open space properties.

Rademacher himself lives on a family farm in Weld County, where fracking has been used since the 1970s, and he agrees that companies should be transparent about the chemicals they use. (This week, the COGCC scheduled a public hearing on Dec. 5 to discuss whether fracking chemicals should be publicly disclosed.)

But Rademacher says he’s seen no problems associated with fracking.

“These are not shallow wells that are anywhere near a water supply,” he says.

But Phil Doe, environmental issues director for Be The Change USA, challenges the oil and gas industry’s claim that fracking does not contaminate groundwater. He acknowledges that the drilling depth is usually at around 7,000 feet, way below any water table, but he points out that half of the chemical-infused water that is shot down the well comes back up, and must be disposed of properly.

“Despite what the industry says, it isn’t as rosy as they would have you believe,” Doe says. “There’s a lot of evidence that fracking can have a negative effect on the water supply.”

And it’s not just the chemicals, he says. It’s the sheer amount of water needed per frack — as much as 30 acre feet, or about 9.8 million gallons.

“That’s enough for the annual water needs of 300 people,” Doe says, adding that water is already scarce in Colorado. “That’s not where I think our water should go. It’s insanity. We take our most valuable resource and destroy it for a less valuable resource.”

His wants to enact moratoriums on fracking, as has been done in other states, until all of the questions about the practice are answered.

“We ought to be a little more circumspect,” Doe says. “Can we really trust the oil companies? Is their track record really so superlative?