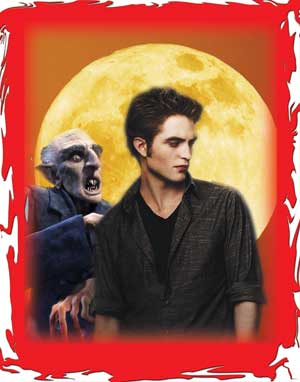 It may be Halloween, but bloodsuckers are no longer relegated to the end of October. Like a dark cloud of mosquitoes, vampires have descended on America. They’re everywhere, from the puppet teaching our children to count to the romantic hero stealing the hearts of teenagers nationwide.

What’s strange is not that vampires are popular — for almost 200 years, they’ve had some sort of seat at the pop culture table.

“We always have a
period of continual interest in the vampire character. So in the 1950s,
you can have Christopher Lee becoming a star in Hammer Horror films. In
the 1960s you can have Dark Shadows as a pop culture phenomenon… leading into this decade, where we now have the emergence of the ‘chick-lit vampires’ on True Blood and Vampire Diaries and Twilight.”

What’s strange is how vastly different
vampires of the 19th century are from the
vampires of 2009. What separates vampires
from other horror creatures is how
they’ve changed over time, showing
remarkable adaptability to whatever
America requires of them. While zombies
have pretty much one role in popular culture,
vampires’ role has mutated dramatically
and adapted to fit the times; media
marketing machines have tapped into their
mystique and created new incarnations to
keep public interest high and money rolling
into the bank.

“[Vampires] are a constant in the culture
because they are a perfect metaphor:
the vampire casts no reflection in the mirror.
So therefore, we look into the mirror
and we see what stares back at us, and we
constantly reinvent the vampire as a character,
generation to generation, era to era,
to reflect our fears, reflect our insecurities,
reflect our wishes and wants,” Dawidziak
says.

So then, from the grotesque Nosferatu
to sparkly Edward Cullen, each generation
gets the Dracula it deserves. My generation,
it seems, deserves a sanitized, PG
Dracula. The character Bram Stoker created
in 1897 is a being without a conscious,
a monster who is human only in physical
appearance. He is, in the words of retired
academic Elizabeth Miller, author of seven
books on vampires, “evil incarnate.” The
current version of the vampire mythos, as
evidenced by the enormous popularity of
the movie Twilight and the HBO series
True Blood, presents vampires as ideal
romantic heroes — bad-boy outsiders,
tough enough to protect the girl from evil,
yet sensitive enough to introduce to the
parents. The vampire, once one-dimensionally
evil, has evolved into a complicated,
brooding pretty boy.

In this regard, Twilight and True Blood,
the former based on the incredibly popular
teen romance novels by Stephenie Meyer,
the latter based on the almost-as-popular
Sookie Stackhouse novels by Charlaine
Harris, have some things in common. Both
male vampire heroes, who are much older
than the heroines, become awkward and
stiff after meeting the loves of their lives —
young, naive (and in Twilight, underage)
virgin girls. During the courtship, both
vampires, children of the 19th century, after
all, maintain a sort of rigid Cotillion formality.
Even the romantic hook of both
plotlines is exactly the same, with roles
reversed: In Twilight, leading high school
psychic vampire Edward Cullen finds himself
madly attracted to new-girl-in-school
Bella Swan because he cannot read her
mind. True Blood’s Sookie Stackhouse can’t
keep her telepathic thoughts off of vampire
Bill Compton because his mind, unlike the
everyday humans surrounding her, is
unreadable.

In the most dramatic departure from
traditional vampire lore, Bill and Edward
fight their vampirism and cling to their
humanity — a case of “vampire guilt,” if
you will. Bill subsists on a Japanese synthetic
blood substitute, and Edward only
drinks animal blood, coyly calling himself
a vegetarian.

The idea of the reluctant vampire originated
in the 1960s and continues strong
today, Dawidziak says. The TV series Dark
Shadows started it.

“They made [Barnabas Collins] the
first vampire character who questions his
own nature. This had never been done
before… He was known as the vampire as
Hamlet… This sets everything up on a tee
for Anne Rice in the ‘70s and her endlessly
introspective vampires. It also sets it up for
the heroic vampires to follow,” he says.

The approachable vampires on the
market today were bred by romance novels
before making their way to television and
cinema, and many say author Christine
Feehan, whose Dark Series novels exploded
onto the romance scene in 1999, selling
millions of copies and topping bestseller
lists, is responsible. The series stars the
Carpathians, a vampire-like race, and now
includes 20 books. Feehan says vampires
make for great romance heroes because
their vampirism is an excuse for their
alpha-male characteristics, which in a regular
man would seem unbelievable.

“You have a lot more scope, where
[vampire romance heroes] can be oldworld
and courtly, and they can be arrogant
and powerful and deadly but still be
[acceptable], which a modern-day man in
a contemporary story cannot — you have
to keep them very politically correct,”
Feehan says. “But a vampire doesn’t have
to be. He gets to bend all the rules, and
you can make him a good guy or a bad
guy, and there’s always that edge of danger
you’re writing about.”

So, perhaps taking away the male’s
humanity and replacing it with paranormal
myth allows an author to remove the
shackles of political correctness from the
male hero, permitting him fulfill a much
racier female fantasy.

“Well, [male vampire heroes still] have
to be human,” Feehan says. “You know, it’s
a very interesting thing. Women, when
they write to me about this, I remember
one letter in particular struck me, and she
was saying how her husband was so wonderful
and how they had kids, and he
worked two shifts, and she was like, ‘But I
dream about one of these Carpathians.’
And I wrote back to her, and I said, ‘That
man is slaying dragons for you… He’s
doing the things a modern man has to do.’”

Vampires embedded themselves into
the popular psyche, fittingly, during the
Romantic Era, at the hands of one of the
period’s most famous figures, the poet and
aristocrat Lord Byron.

On a stormy summer night, Byron and
his personal physician, John Polidori, found
themselves holed up in a lakeside villa with
the poet Percy Shelley, Mary Godwin, and
Godwin’s stepsister Claire Clairmont.
Caged indoors by the bad weather, the
group resorted to reading ghost stories to
one another. Afterward, Byron suggested
the group write their own tales and share
them with each other.

Two of the most enduring monsters in
horror fiction came from that night. While
Byron produced little of note, Godwin,
who eventually would marry Shelley,
began writing what would eventually
become Frankenstein, and Polidori wrote
the beginnings of what in 1819 he would
turn into The Vampyre — the piece that
propelled vampires into the era’s psyche as
plays and operas starring vampires became
fashionable.

“Polidori based his vampire on Lord
Byron, and that made [the character]
extremely popular,” Miller said. “They’d had
a falling out before because Byron had fired
him, and it’s generally believed that he did
this to Byron as a form of revenge.”

Lord Byron and Dracula shared sex
appeal, if nothing else. The common
image of a vampire is a predatory Don
Juan, and an undercurrent of sexuality
penetrates deeply through most forms of
vampire fiction.

“The vampire symbolizes the masculine,”
says sexologist Jenni Skyler, noting
that with male vampires, “denied masculinity
is allowed to come forth.”

Many women have submissive fantasies,
she said, but cultural attitudes that
frown upon nontraditional sexual activities
can shame women into not expressing
them. Vampire romances, she said, provide
women with a safe outlet for these fantasies.

“At the end of the day, it’s that world
where in a country that’s puritanically
prudish, we often need permission just to
fantasize,” Skyler said.

The vampire is a timeless, immortal
mainstay in horror literature, possibly
because, as Dawidziak points out, there are
simply very few original ideas in the horror
genre (hence the beating of the dead
horse that produces Scream IV, Saw VI).
So when a good one comes around, the
media bites down hard and feeds until satisfied.
Vampires have offered their necks to
entertainment for nearly 200 years, and
the thirsty public has happily drank.
Vampires have spiked in popularity before,
Dawidziak says, and in the future, after
this wave of vampire popularity has receded,
he adds, maybe somebody will scratch
their head and ask, “Remember when
vampires were romantic?” Only time will
tell if the answer will be yes or no.