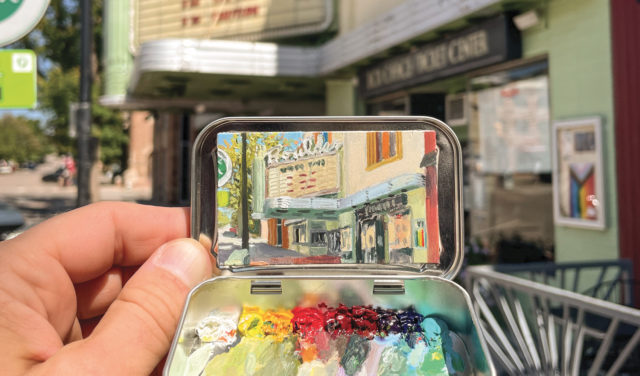 “I’m going to give you a little slice of reality,” Lori Preston, executive director of the Museum of Boulder, says over a Zoom call. “And that is we lose, right now, $50 grand a month.”

Realistically, Preston says, if the historical museum received no more money between now and the end of the year, “we have a survival rate of about 10 to 12 months.”

Operating on insufficient funds is a reality for many small-to-medium arts organizations across Boulder County, according to interviews with more than a dozen artists, city employees and advocates. Of course, finding the money to stay afloat is a perennial problem for creative endeavors, but the pandemic shifted the financial landscape along new fault lines.

Federal grants — CARES, the Shuttered Venue Operators grant, the Paycheck Protection Program — helped creative industries of all stripes make it through the crucible of the last two years. And the dollars were significant: Between the four largest arts-funding organizations in Boulder, federal grant money increased tenfold, from approximately $2.5 million in 2020 to more than $20 million in 2021, according to Matt Chasansky with the city’s Office of Arts and Culture.

But as these programs sunset, Chasansky is concerned about arts organizations “falling off the cliff.”

“We got one to two years of enormous amounts of funds coming into nonprofit organizations, all of which was spent to get people paid and keep it afloat,” Chasansky says. “And so what does it mean on the other side of that?”

Who’s got the money?

There are four main sources of grant funding for nonprofit arts organizations in the city of Boulder: the Boulder Arts Commission (BAC), Colorado Creative Industries (CCI), the National Endowment for the Arts (NEA), and the Scientific and Cultural Facilities District, or SCFD.

SCFD — a tax district comprising seven counties, including Boulder — is the largest funder of all, doling out some $60 million annually to around 300 organizations. The majority of these grants are for general operating funds, which allow organizations to spend the money however they choose, unlike a project- or donor-driven grant. At the county level, the Boulder County Arts Alliance also provides a number of grants, though these are mostly project specific.

The city of Boulder comes in second after SCFD. Boulder’s Office of Arts and Culture grants $925,000 per year from the city’s general fund. The seven-person BAC deliberates on how to spend it.

But the pandemic, as Chasansky puts it, “was weird.”

The Office of Arts and Culture got an additional $913,000 from City Council from the American Rescue Plan Act (ARPA) for arts grants, which they split into two categories: One, an artist-hiring grant, gives a dozen organizations $3,000 each to hire a local artist to create, whether that’s mounting an exhibition or writing a play; the second provides 10 organizations with $30,000 each year for three years to hire back arts administration positions that were lost during the pandemic.

The Museum of Boulder received one of these administrative rehire grants, recently onboarding Aubrie Reed as an instructional designer to create open-source curriculum for schools about Colorado’s Black history.

However, because the museum decreased its budget in 2021, Preston says it received a smaller general operating grant from the city this year — a $30,000 difference. And next year, Preston can’t count on 10% of her operational funds coming from ARPA money.

The rehire grant requires a commitment to maintain the position after the three-year period, but with ticket sales still at just 40% of pre-pandemic levels at Museum of Boulder, there’s a lot of uncertainty.

Preston points to the fact that Greeley, Fort Collins and Longmont all have municipally supported history/cultural museums like Museum of Boulder — but Boulder’s Office of Arts and Culture doesn’t operate any facilities.

“We so represent the city,” Preston says, mentioning the museum’s collaboration with the city to archive tributes in the aftermath of the King Soopers shooting. “But we’re not in their budget in terms of preserving us as an institution.”

Of course, grants — federal or municipal — aren’t the only way arts organizations get funding.

“We need people paying attention to their role as an audience member and as a donor on the other side of [the federal relief funding], because everyone’s going to be trying to adjust to a new normal in these organizations,” Chasansky says. “We need to rebalance the funding equation. The most important thing is getting people to buy tickets again. And there’s no guarantee that habits haven’t changed in such a way that it’s not going to be [enough to support organizations].”

“People are not coming back at the rate that we anticipated,” says Claudia Anata Hubiak, executive director of Boulder Ballet. “And so you budget for something, you take a guess, you hope you get it right. We’ve been conservative, and still, numbers have been significantly under what we anticipated.”

Tickets aren’t an issue for Leah Brenner Clack, founder and director of Street Wise Arts Mural Festival, running Sept. 29-Oct. 2. The nonprofit offers workshops and artists talks for free, in addition to live painting on walls around Boulder during the festival. All artists are paid for their work.

“Most of [the funding for the festival] comes from corporate sponsorships locally,” she says. “And those are just getting harder and harder to continue to get in a predictable way. And often they don’t come in until later in the year and so you’re trying to plan this huge event and not knowing if you have the money to fund it. That’s kind of where we’re at this year. I’m still trying to raise money to cover our bases. And I think in the future, if we want to keep doing this, we’re going to have to figure out either a way to scale it smaller or work with partners that have funding in advance.”

Clack says 2020 was the biggest mural festival Street Wise has put on since launching in 2019, thanks in part to COVID relief funds (which Clack also received in 2021), but also because of philanthropic giving from individuals and corporate sponsors.

“Because people cared about it, and it was something they could experience outside and feel connected through,” she explains.

Last year was the first time Clack says she was able to take a salary for her work with Street Wise, “and it was a very tiny salary.”

But as federal relief dries up, so, it seems, is philanthropic giving, partially, some guess, from “donor fatigue.”

“Donors came out of the woodwork when the shutdown happened,” says Hubiak, with Boulder Ballet. “We were so supported, and I talked to a lot of organizations that felt the same way. But there’s only so many times you can ask and continue to say, ‘We’re rebounding from COVID; COVID has been hard; the rebuild is slower than we anticipated.’ To have the same problems year after year at this point, it’s not compelling.”

Chasansky takes the notion further, suggesting that “private donations, individual donations, memberships, things like that, I think have always been a little anemic in Boulder,” with more focus in the area placed on environmental conservation.

“We only have [around] 800 memberships in a community like ours, with over 100,000 people,” Preston, of Museum of Boulder, says. “And it’s not that much — it’s $35 for an annual membership. So, if we could get that mindset of ‘let’s support local just by buying a $35 membership,’ we could have more stability.”

Affordable housing and a place to play

Nearly every artist, executive director, policy maker and arts advocate brought up problems that exacerbate funding difficulties, namely the cost of housing and a lack of affordable performance space.

Through her work with Create Boulder, an arts advocacy organization, Malden and her co-founders have funded an “envisioning study,” as Malden calls it, to see what kind of performing arts center Boulder needs, and where that could be located. (Boulder Weekly’s publisher, Fran Zankowski, is one of the four members of Create Boulder.)

The Dairy is limited in the number of organizations it can provide office space to, and the number of performances it can host in a season.

“We’re super blessed to be at The Dairy and have that space,” says Hubiak, of Boulder Ballet, which has administrative office and rehearsal space at The Dairy. “That being said, there still is opportunity for growth within our organization, and there’s nowhere for us to go. And I know that us being [at The Dairy] limits other people from being able to present work, and being able to have office spaces. So there’s a huge need in the community for the city or for private funding to create a 500-to-1,000-seat space that has administrative offices and rehearsal spaces. Because per capita, there are so many working artists in this town and if we’re going to continue to support them, then we definitely need more space.”

Travis LaBerge, executive director of Parlando School of Musical Arts, says that affordable housing for artists is becoming a bigger issue for his employees.

“We have more faculty members at Parlando commuting in from outside of Boulder,” he says. “And it’s difficult because they have to live further and further away to find something that’s affordable to be an artist, a musician, and work in this area.”

Malden points to the fact that other communities around the state are investing in affordable housing, particularly rural communities like Trinidad.

“They’re positioning themselves to be a welcoming place for the creative community,” Malden says.

Despite frustrations, most artists still say funding for the arts has improved in Boulder over the last decade, particularly with the advent of the cultural plan in 2015. Chasansky says city staff are currently in the process of developing a new cultural plan by 2024 that will “cover some of the gaps” left by the original plan.

“We get that the community has an appetite for more funding,” Chasansky says. “What does that look like?”

For organizations like the Museum of Boulder, the answer can’t come soon enough.

“I would ask this question of our community: If not us, then who?” asks Preston. “If not the Museum of Boulder to preserve all of these items, who would do it?