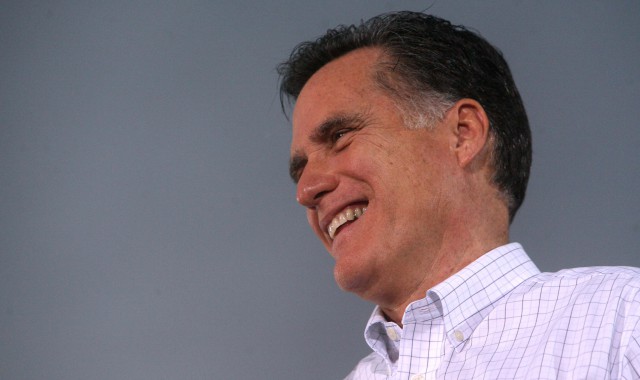 WASHINGTON — Republican presidential candidate Mitt
Romney and his wife, Ann, paid $3 million in federal taxes in 2010 on
nearly $21.7 million of income derived from a vast array of investments,
amounting to an effective tax rate of 13.9 percent, according returns
released by his campaign Tuesday.

That’s substantially lower than the top 35 percent
marginal tax rate on wages and salaries — and much lower than the rate
than his political rivals. President Obama paid an effective tax rate of
26 percent in 2010, while former House Speaker Newt Gingrich paid a
rate of 31.6 percent. Experts say Romney benefits from a tax code that
allows investors to keep more of their income than wage earners,
particularly investors in the rarefied world of private equity.

Even among his wealthy peers — a cohort that
particularly benefits from the lower capital gains rate — Romney’s rate
is below the average 18.5 percent effective tax rate paid by the richest
1 percent, according to the Tax Policy Center.

“I pay all the taxes that are legally required and
not a dollar more,” Romney said in a debate in Tampa on Monday night
hosted by NBC. “I don’t think you want someone as the candidate for
president who pays more taxes than he owes.”

“I’m proud of the fact that I pay a lot of taxes, and
the fact is there are a lot of people in this country that pay a lot of
taxes,” he added. “I’d like to see our tax rate come down and focus on
growing the country, getting people back to work. That’s our problem in
this country right now.”

On Tuesday, the Romney campaign released a statement
from former IRS commissioner Fred Goldberg saying he had vetted the tax
returns.

“These returns reflect the complexity of our tax laws
and the types of investment activity that I would anticipate for
persons in their circumstances,” Goldberg said. “There is no indication
or suggestion of any tax-motivated or aggressive tax planning
activities. In my judgment, they have fully satisfied their
responsibilities as taxpayers. They have done so by relying on a highly
reputable return preparer and other advisers, who have in turn relied
primarily on information provided by third parties to them and to the
IRS. The end result of that process has been returns that include a
multitude of schedules, IRS forms and accompanying statements that
provide appropriate transparency and the proper payment of taxes that
Governor and Mrs. Romney owe under current law.”

The longtime private-equity chieftain hopeful
released his tax returns after pressure from Gingrich and at the urging
of his political allies, who fretted that the matter was becoming a
dangerous distraction.

The former Massachusetts governor has revealed in
financial disclosure forms in the past that he is worth as much as $250
million, but he had never released tax returns that reveal how much
money he makes each year — or how much he pays in taxes.

The release of Romney’s federal tax returns may not
provide dramatic new insight into his finances, but it is sure to fuel
the increasingly high-decibel debate about economic disparity and tax
fairness that has overtaken this year’s presidential contest and
repeatedly tripped up the Republican presidential hopeful.

“There’s no question that we have a tax code that’s
far too complicated, far too complex, and when the average middle class
worker is paying more in taxes than people who are making $50, 60
million a year, we’ve got to change that,” he said.

The intense focus on Romney’s tax returns underscores
how the very core of his candidacy — his experience leading a private
equity firm — is also proving to be a liability in a political climate
in which class issues have taken center stage.

Gingrich has been hammering Romney over his tenure at
Bain Capital, while Democrats have taken to gleefully mocking the him
as a modern-day Gordon Gekko, the high-flying financier portrayed in the
movie “Wall Street.”

“For the average person, it raises the issue of why
some of the wealthiest people in the world are taxed at some of the
lowest rates we have,” said Joseph Bankman, a professor of tax law at
Stanford Law School. “Here is someone who kind of personifies income
inequality.”

Romney’s returns show how much he has gained from
paying the lower capital gains rate on much of his income from Bain, the
private equity firm he co-founded in the mid-1980s.

The Romney returns also spotlight the other,
congressionally mandated tax advantages enjoyed by the rich to reduce
their tax burdens, as well as how much of his wealth is tied up in funds
based in low-tax jurisdictions overseas, including the Cayman Islands.

A public perception that the wealthy don’t pay their
fair share of taxes has risen in recent years. A Pew Research Center
study last month found that 73 percent of Democrats and 57 percent of
independents cited it as their top complaint about the federal tax
system, along with 38 percent of Republicans.

The questions swirling around Romney’s finances have only furthered the debate.

“We’re learning that there are some really rich
people who are not paying that much, and that’s the way the system is
designed,” said Leonard E. Burman, a professor of public affairs at
Syracuse University and former deputy assistant secretary for tax
analysis at the Treasury Department. “There is a question about what is
the rationale for taxing capital gains at such a lower rate than other
income.”

The policy has drawn criticism from the likes of
billionaire investor Warren Buffett, who told Bloomberg Television on
Monday that while he does not fault Romney for paying only what the law
requires, the tax code should be changed.

“He makes his money the same way I make my money,”
Buffett said. “He makes money by moving around big bucks, not by
straining his back or going to work and cleaning toilets or whatever it
may be. He makes it shoving around money.”

The release of his tax returns are likely to put the
focus of the Republican primary debate even more directly on Romney’s
central pitch — that his experience at at Bain Capital gives him the
experience to lead a nation desperately in need of economic growth.

On the stump, Romney touts the investments he led in
big-growth companies such as Staples and the Sports Authority, which now
have tens of thousands of employees. His opponents, including his GOP
competitors, have portrayed him openly as a greedy Wall Street
“financial engineer” who made huge profits even when workers at firms he
acquired suffered.

A review of Romney’s record by the Tribune Washington
Bureau found a mixed record of job creation in acquired companies. For
example, four of the top 10 firms acquired by Bain during the Romney
years eventually went bankrupt. But the review found a clear record of
enormous financial gain: Of the four firms that went bankrupt, three
provided significant gains for Bain partners and investors.

The mechanics behind Romney’s low tax rate puts more
scrutiny on an industry that has been built largely on a long-standing
deduction for interest expenses, encouraging the use of debt rather than
equity to purchase and transform private companies through heavily
leveraged investments.

Private-equity executives have become among the most
aggressive at tax avoidance. “There is a contagion of tax sheltering” in
the private-equity industry, says Brad Badertscher, a professor at
Notre Dame who has studied tax liabilities of private equity firms.
“They are willing to take risks in tax avoidance that others avoid,
either for reputational reasons or because they lack the sophistication
to do it.”

Badertscher and other academic experts emphasize that
the tax breaks taken by Bain and other private-equity firms are legal.
The deduction for capital gains income was intended to encourage
risk-taking that could benefit the overall economy.

Another expert in corporate taxation says that even
management fees intended to be taxed as ordinary income are often
converted by private-equity partners into capital gains so that they are
taxed at a lower rate.

“Management fees typically consist of 2 percent of
the private equity fund’s capital,” said Sonja Olhoft Rego, an associate
professor at Indiana University. Theoretically, this fee is paid as
compensation for management services and is considered as ordinary
income for tax purposes. However, she said, her studies of the industry
show that “management fee income is often converted from ordinary income
to capital gain income” by making the fees contingent on profitability.