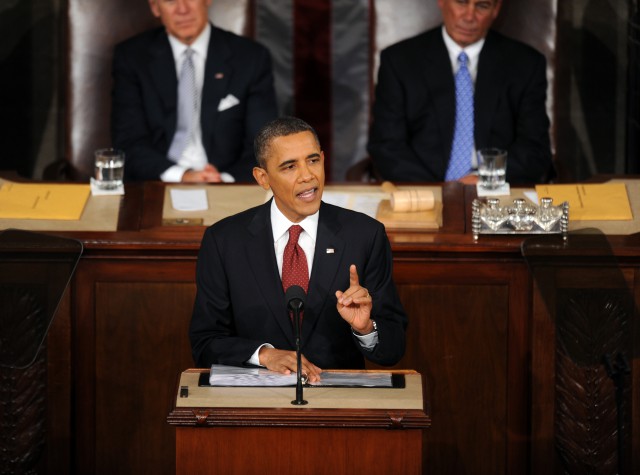 WASHINGTON — President Barack Obama opened his
re-election campaign with a combative State of the Union speech,
proposing to require that millionaires pay at least 30 percent of their
income in taxes and to eliminate deductions that save companies money if
they move jobs overseas.

He also proposed rewarding businesses that manufacture and create jobs in the U.S. with lower corporate tax rates.

Heavy in emphasis on income inequality and its
causes, the president’s speech included several ideas already snubbed by
House Republicans, including a program to upgrade roads and bridges and
a fee on banks to help “responsible” homeowners refinance their
mortgages.

The plans drew lines for a year of partisanship between now and the November election.

Obama hopes to campaign as the protector of an
endangered middle class suffering under an unfair system. If Americans
want to make it through tough times and build a stable economy, he
argues, the affluent should shoulder more of the burden, and government
should take an active role in spurring job growth.

“We can either settle for a country where a shrinking
number of people do really well, while a growing number of Americans
barely get by. Or we can restore an economy where everyone gets a fair
shot, everyone does their fair share, and everyone plays by the same
rules,” he told a joint session of Congress gathered in the chambers of
the House of Representatives. “What’s at stake are not Democratic values
or Republican values, but American values. We have to reclaim them.”

Republicans argue that higher taxes will kill jobs and that Washington needs to cut spending instead.

Withdrawal from two wars and success in the fight
against al-Qaida will be key parts of Obama’s re-election campaign. He
opened Tuesday night’s speech by paying tribute to service members as he
listed those accomplishments.

As he spoke, the gallery of the House provided an
illustration of the conflicting narratives Republicans and Democrats
will tell as the election year unfolds. Michelle Obama was surrounded by
veterans of Iraq and Afghanistan. They included the admiral who led the
operation that killed Osama bin Laden and a gay Air Force intelligence
officer who is now allowed to serve openly because of the repeal of the
“don’t ask, don’t tell” policy.

Obama twice referred to the death of bin Laden and
said he kept the flag that Navy Seals carried with them on that mission
last May. As he closed his 65-minute speech, he pointed to the Seals’
teamwork and called for lawmakers to work together.

“Each time I look at that flag,” he said, “I’m
reminded that our destiny is stitched together like those 50 stars and
those 13 stripes.”

As he entered the House chamber, Obama found and
embraced Rep. Gabrielle Giffords, D-Ariz., who returned to say farewell.
She is expected to resign her seat on Wednesday to concentrate on
recovering from a gunshot wound suffered more than a year ago when a man
opened fire while she spoke with constituents in Tucson. Twelve others
were wounded and six people died. Giffords’ husband, retired astronaut
Mark Kelly, sat with Michelle Obama.

Boehner’s list of invited guests spanned oil company
managers, including one from ConocoPhillips, and backers of the
controversial Keystone XL pipeline that Obama has shelved, for now,
pending further study.

Other unmentioned characters also played a role in
the evening’s stage play. On the same day that Republican presidential
candidate Mitt Romney disclosed that he pays about 15 percent in taxes
on millions in income, Obama spelled out a legislative agenda that would
ensure those who make $1 million or more pay at least 30 percent.

Obama has pushed for higher taxes for the most
affluent for much of his tenure, without success. Months after coming up
with the “Buffett Rule” — which says high-earners like billionaire
Warren Buffett should pay the same tax rate as those who earn less —
Obama added the 30 percent target to his wish list.

Seated in the gallery for the announcement was
Buffett’s secretary, who, as Buffett and the president frequently point
out, pays a higher income tax rate than her boss.

“You can call this class warfare all you want,” Obama
said. “But asking a billionaire to pay at least as much as his
secretary in taxes? Most Americans would call that common sense.”

The 30 percent minimum rate would mean a tax hike for
many top earners. The average effective tax rate for the top 1 percent
last year was 26 percent, according to a study by the Tax Policy Center.

In a shot at Romney and other Republican presidential
contenders who criticized the administration’s 2009 decision to bail
out General Motors and Chrysler, Obama noted his plan had worked.

Taxes were not the only area in which Obama stressed proposals that Republicans opposed.

He called on Congress to send him a version of the
Dream Act, designed to grant citizenship to some undocumented immigrants
who were brought to the U.S. as young children. Even if Congress cannot
agree on comprehensive immigration reform, he said, “let’s at least
agree to stop expelling responsible young people.”

Obama also called for a full-year extension of the
payroll tax cut, which is due to expire at the end of February. It was
one of the few lines that drew bipartisan applause.

As he did last year during the fight over the tax
break, the president is taking his proposals to the public. That
strategy helped reverse a slide in his approval ratings last fall when
he launched his campaign against a “do-nothing Congress.” Obama departs
Wednesday morning for a three-day trip around the country. He will
unveil details about central elements of his plan as he visits Iowa,
Arizona, Nevada, Colorado and Michigan — all states he hopes to win in
November.

The president’s blueprint calls for spurring
manufacturing through several changes to the tax code. He wants to wipe
out the deductions that many companies get for the costs of shutting
down a factory in the U.S., such as for mothballing the building or
doing environmental remediation.

Obama also proposes making companies pay a minimum
tax for profits and jobs overseas, giving American corporations less of
an incentive to relocate their businesses to other countries. Aides to
the president say he will name a specific tax figure around the time he
unveils his new budget, expected the second week of February.

In hopes of easing the continuing housing crisis, the
blueprint suggests imposing a fee on banks to help cover the costs of
refinancing for distressed homeowners.

“Responsible homeowners shouldn’t have to sit and wait for the housing market to hit bottom to get some relief,” he said.

Some advisers to the president say they believe some
collaboration with Congress is possible, especially if Americans rally
behind the ideas. But a jaded faction within the White House expects
little or no cooperation.

Obama alluded to the bitter battles that paralyzed
Washington for much of the last year — as well as his determination to
confront those who oppose him.

“As long as I’m president, I will work with anyone in
this chamber to build on this momentum,” he said. “But I intend to
fight obstruction with action, and I will oppose any effort to return to
the very same policies that brought on this economic crisis in the
first place.”