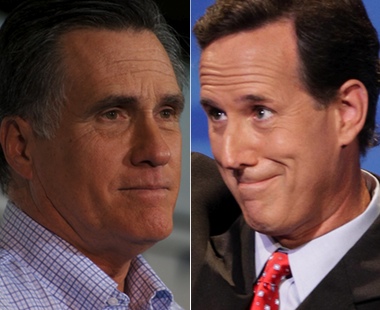 Rick Santorum and Mitt Romney are growing increasingly angry as
Tuesday’s presidential primary in Michigan approaches. They’re both
trying to gain the upper hand, knowing full well that the Michigan
winner will automatically gain momentum before Super Tuesday on March 6.
And they weren’t shy about lobbing personal attacks “in exchanges that
have grown increasingly bitter,” notes the Los Angeles Times.

Santorum accused Romney of being a fake conservative and even
compared him to President Obama. He accused Romney of changing positions
on several key questions. “Folks, this is an issue of trust,” he said.
“Imagine what he’s going to do when he’s in the general election.” He
also accused Romney of “campaigning as an Occupy Wall Streeter.”

Romney, meanwhile, characterized Santorum as a Washington insider,
repeatedly questionining his endorsement of Arlen Specter, a fellow
Pennsylvanian who later became a Democrat. “We have to have principled,
conservative leadership, and I have demonstrated that through my life,”
Romney said.