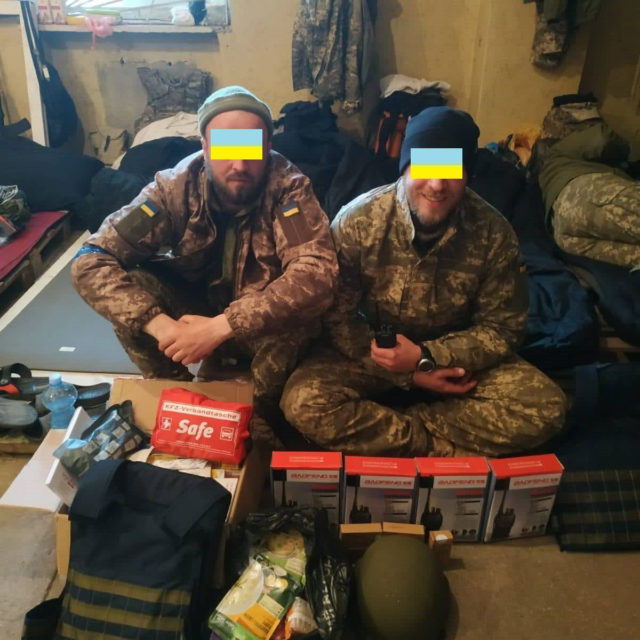 For weeks during Ukraine’s Orange Revolution, in late 2004, Andriy Zakutayev lived in a tent in Kyiv, in solidarity with thousands of citizens in protest of government corruption, voter intimidation and electoral fraud.

“That’s where we met,” says his partner, Victoriya Oliynyk.

Today the couple is still invested in making their native land a better place, albeit from 5,000 miles away here in Boulder, where they manage Sunflower Seeds Ukraine, a small, all-volunteer organization with a multinational team that provides medical aid and protective gear to groups of citizens on the ground fighting the Russian invasion in Ukraine. Sunflower Seeds also provides humanitarian assistance to civilians who are now tasked with living day-to-day life during a war.

“People did not expect this invasion,” Oliynyk says. “No one we know left the country. People never thought that this would get to this level or that anything really dangerous could happen. Everyone’s in complete shock.”

“But after the initial shock passed, many were prepared to respond,” adds Zakutayev, “because a lot of grassroots campaigns, humanitarian organizations and a kind of civil movement had been established in 2004 and 2014, those revolution times around the Russian annexation invasion (of southeastern Ukraine) in 2014. So I think a lot of people were able to turn on a dime and just bypass that initial shock and start doing things from the bottom up.”

Zakutayev and Oliynyk have been living in the United States since 2006, attending graduate school at Oregon State University before moving to Boulder to start their careers. Zakutayev and Oliynyk began their charity work in 2014, when Russia invaded Crimea and the Donbas, providing some help “on a peer-to-peer basis,” says Zakutayev, to organizations in Ukraine that were supporting troops. They took their aid efforts to the next level when Russia engaged in a full-fledged invasion on Feb. 24 this year, formalizing Sunflower Seeds Ukraine, named after Ukraine’s national flower.

“So many Ukrainians in the United States are doing exactly the same thing” as Sunflower Seeds, explains Oliynyk, “just raising funds from their connections, from their friends, buying medical aid, buying protective gear, and sending it to Ukraine. We see these large organizations like Red Cross and UNICEF raising millions, and that’s important work, but sometimes it’s too slow. One of the major complaints from (Ukrainians) is drastic shortages of basic protective gear, helmets, and first aid kits.”

With help from friends they met in graduate school in Oregon, plus a delivery team based in Poland, Zakutayev and Oliynyk use donations to purchase everything from medical supplies to military gear and get it to people on the ground in Ukraine. The delivery team works to package, create instructions in Ukrainian, and pass the packages to buses and minivans with dedicated drivers who distribute the goods across the boarder.

“I don’t think Ukraine would have been now in a position that it is in the war,” Zakutayev, says “if it wasn’t for everything Poland has done for Ukraine.”