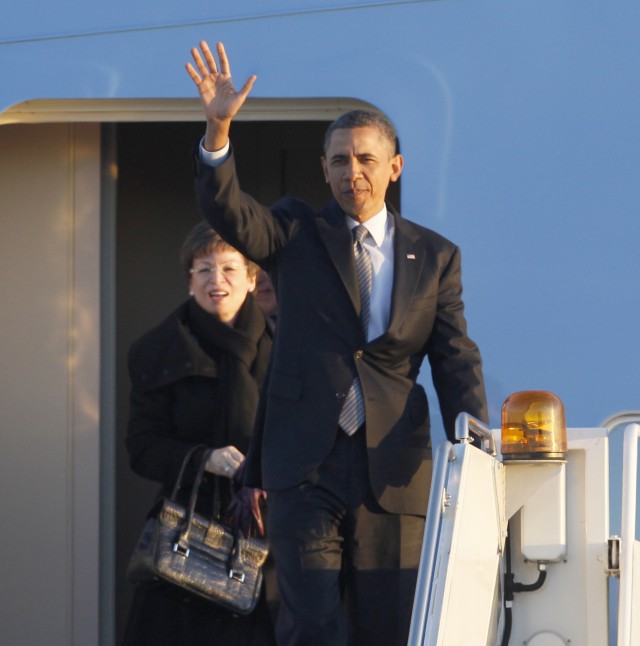 WASHINGTON — President Obama will follow up his State
of the Union address next week with a three-day, five-city swing
through electoral battleground states.

The White House announced Wednesday that Obama will
make stops in Iowa, Arizona, Nevada, Colorado and Michigan next week to
sell his election-year agenda, which likely will focus on jobs.

White House spokesman Jay Carney declined to offer
more details on Obama’s speech to Congress so as not to get ahead of the
president.

But administration officials have identified just one
major priority for the president in dealing with lawmakers this year —
an extension of the payroll tax holiday through the end of 2012.

Otherwise, the White House has made no secret of
plans to use Congress as a foil this year, while the president pursues
unilateral action through his executive authority.

“He is fiercely focused on economic growth and job
creation, and using every tool available to him,” Carney told reporters
Wednesday.

Carney downplayed the political significance of
Obama’s itinerary next week — all in states that the president is likely
to contest fiercely this year.

“Every president should travel across the country to meet with Americans in as many states as possible,” he said.

Obama travels to Florida on Thursday for an
announcement about the tourism industry at Disney World, a little more
than a week before Republicans there will vote in a presidential
primary. His stop in the Las Vegas area next week also precedes that
state’s Republican caucuses.

“He isn’t even trying to hide it anymore — President
Obama’s number-one priority is saving his job and he doesn’t care how
many taxpayer dollars it takes to do it,” she said in an emailed
statement.