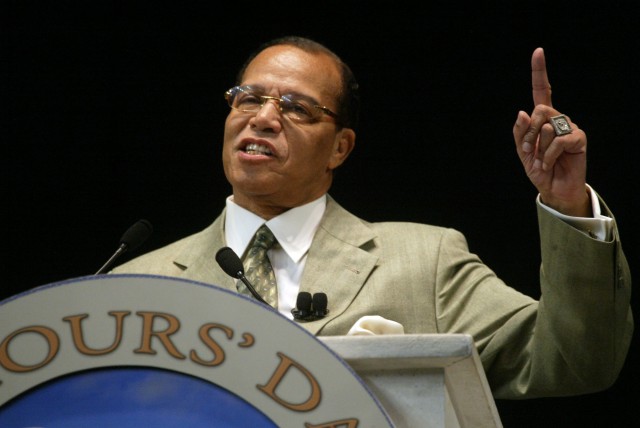 — Warning that destruction could be on America’s doorstep because it oppresses “God’s chosen people,” Minister , the controversial Nation of Islam leader, defended Libyan leader on Thursday, calling the U.S. action in hypocrisy.

Speaking from the pulpit of Mosque Maryam, the Nation of Islam’s international headquarters, purchased 40 years ago with a loan from Gadhafi, Farrakhan blamed demons for altering President moral conscience and driving the assault on Gadhafi, who he calls a brother.

“It is a terrible thing for me to hear my brother
called all these ugly and filthy names when I can’t recognize him as
that,” Farrakhan said to the crowd assembled at the mosque on .
“Even though the current tide is moving against him … how can I
refuse to raise my voice in his defense? Why would I back down from
those who have given so much?”

Though they haven’t spoken since 2005, Farrakhan and
Gadhafi have been allies for decades. In 1996, around the time Gadhafi
shifted from pan-Arab to pan-African ambitions, Farrakhan was
criticized for traveling to meet the leader in Tripoli.

The following year, Gadhafi addressed Nation of
Islam members via satellite, lauding Farrakhan for being a “courageous
freedom fighter” who galvanized African-Americans at the Million Man
March in ,
and Muslims in nations around the world. During that speech, Gadhafi
panned America for taxing poor people, who the Libyan leader said do
not benefit from space exploration or support of “a Hebrew state.”

“Consequently,” he said, “the voice of will be heard among the simple people louder than the president of .”

On Thursday, Farrakhan said scenes from an earthquake- and tsunami-ravaged inspired him to warn the American people about an impending natural disaster that will punish them for their arrogance.

“A major earthquake is on the way to you and me and
us,” he said. “Death and destruction is at the door of all of us, and
we are worse prepared than the Japanese.”

Farrakhan cautioned Obama that he was being used as a pawn to oppress his own people in . He insisted several times that Jews controlled the media and pressured Obama to take so-called humanitarian action in , but not in other places such as the .

“The stupid mistake we make is assuming the
president is the supreme power,” Farrakhan said. “The mad dogs are
growling and grinding in ,” referring to one of Gadhafi’s nicknames, “Mad Dog of the .”

He commended former White House correspondent for her honesty and candor in recent controversial remarks about and the Palestinians and blamed the Jewish-run media for ousting her. He also commended Gadhafi for plans to nationalize oil industry to benefit his own people and other poor African nations.

But , vice president for programs and studies at the , said it’s questionable how much profit from oil was invested in and how much was funneled to other African countries.

To his credit, Gadhafi has helped build
infrastructure and put food on the table in extremely poor African
nations, she said. But in doing so he has backed “pretty nasty
regimes,” Bronson said.

She conceded that America “hasn’t done much better.” But the humanitarian element of the intervention in cannot be denied, she said.

“Gadhafi as a state leader made the statement that
he was going to wipe out Benghazi,” she said. “The language was one of
sheer brutality and taking no responsibility for protecting his people.”

At one point in his talk on Thursday, Farrakhan
projected photographs featuring Gadhafi in the cheerful company of
European leaders including former British Prime Minister , French President and Italian Prime Minister . Farrakhan blamed those leaders for “lulling (Gadhafi) to sleep” before they went after him.

Brian Endless, an expert in and security issues in the and at , attributed the recent thaw between Gadhafi and U.S. administrations to their mutual animus for Islamic fundamentalism and the terror organization. Libyan intelligence enabled the U.S. to find key operatives after the , terrorist attacks.

of the
in America lauded Farrakhan for speaking the truth on Thursday. Howard
said he believes the rebels are murdering Libyans of African descent
and said nations who go against Gadhafi are guilty of ethnic cleansing.

Farrakhan never mentioned ethnic cleansing in his address. But he said he didn’t fault Gadhafi for going after “traitors.”

Though most members referred any questions to Farrakhan’s spokespeople, member of said he supported everything the Nation of Islam’s leader had said.

“It’s kind of hard to follow up the Minister,” he said. “He speaks clearly and plainly to the issues.”

Visit the on the Internet at http://www.chicagotribune.com/.