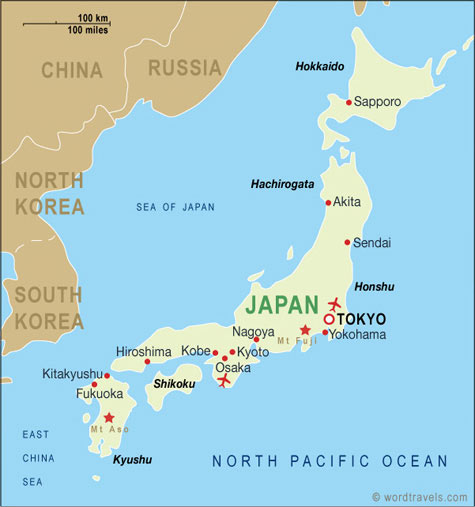 and — The worst earthquake in generations struck off the northeast coast of on Friday, setting off a devastating tsunami that swallowed swaths of coastal territory and fanned out across the , threatening everything in its path.

The 8.9-magnitude earthquake — the world’s fifth-largest since 1900 and the biggest in in 140 years — struck at local time, shaking buildings violently in for several minutes and sending millions fleeing for higher ground.

At least 60 people are believed dead, though that
number is expected to rise dramatically as officials begin assessing
the extent of the damage. Japanese media is reporting scores of people
missing, likely buried under rubble or swept away by waves as high as
33 feet.

Nearby islands are bracing for the tsunami and warnings have been issued for 53 countries including ones as far as and .

At least 80 fires have been reported across the country and large areas are without electricity.

Japanese television showed aerial footage of an
ominous 13-foot muddy wave washing across land along the northeastern
coast of the main island of Honshu, which appears to have sustained the
worst damage.

Kyodo News reported that a ship carrying 100 people had been carried away by the tsunami.

At least eight people were killed in Sendai, a city
of 1 million in Miyagi prefecture closest to the epicenter. The city
was struck by a wave 20 feet high, then another 33 feet high. A hotel
collapsed and large ships in port were seen lying on their sides.

About 1,100 people were stranded and awaiting help
in the city’s airport terminal, according to state-funded broadcaster
NHK. The airport had no power and was dark. The runway and roads
surrounding the airport were submerged under a layer of muddy water.

According to ,
14 bullet trains were between stations with passengers still aboard,
after the quake triggered emergency safety systems. The whereabouts of
at least one train near the coast in Miyagi prefecture was unknown late
Friday, Kyodo News said.

In other locations, live TV coverage showed massive
damage from the waves with dozens of boats and even buildings being
carried along by waters. Cars could be seen futilely trying to speed
away from the rolling wall of debris.

A large ship swept away by the tsunami rammed into a
breakwater in Kesennuma city in Miyagi prefecture. Waves could be seen
splashing into city streets and over bridges.

Japanese Prime Minister in a press conference called for people to remain calm and reported
that the nation’s nuclear power plants showed no signs of damage.

“The government will make its utmost efforts to
secure people’s safety and limit any damages to the minimum,” said Kan,
who was in parliament when the quake struck.

All trains in were stopped, and black plumes of smoke rose over the skyline. Tokyo ‘s parking lot was reportedly flooded and the tip of the
was bent. Office workers rushed out of their buildings. Subways were
halted, trapping commuters underground. In the nation with the world’s
third-largest economy, all airports were closed for hours.

“I thought I was going to die when it hit,” said , 26, who was walking miles home in .
“At first, it didn’t shake that much. But then the shaking got more
violent and everyone in my office got under their desks. The ceiling
tiles came off and some things fell off shelves.”

, a 29-year-old from studying Japanese in who was on a train when the quake hit, shaking his passenger carriage sharply back and forward.

“People covered their heads with their bags as dust
and small debris fell,” Weiss said. “Something sprung a leak, as there
was a lot of water on the platform.”

Many riders evacuated the train and headed for the
archways, but not Weiss. “I stayed on because I was concerned about the
roof and hanging lights and ventilation systems,” he said. “Lights went
on and off in the train. It felt a lot like the earthquake attraction
at Universal, to be honest, but it wasn’t stopping.

“It was pretty scary,” Weiss said in an e-mail to a
friend. “It felt pretty strong. People were scrambling for the
doorways. The aftershocks are continuing even now.”

People at were told to evacuate buildings and head for the tarmac.

“It felt like a jet had come too close to the window
and everything started shaking and rocking, and there was a huge
rumbling noise,” said , a 32-year-old U.S. Army helicopter pilot who was waiting for a flight to .
“All the signs started swaying and fixtures started popping out. When I
saw the panic on people’s faces, I made a move for the exit.”

The epicenter of the quake was 81 miles off the
coast of Sendai, and it struck at a depth of 15 miles. The combination
of its shallow depth and proximity to the coast made the temblor a
“perfect storm for the tsunami generation” said of the U.S. Geological Survey in , Cailf.

has a long
history of large earthquakes, and its buildings are well-girded to
withstand damage. Observers said this could help minimize casualties.