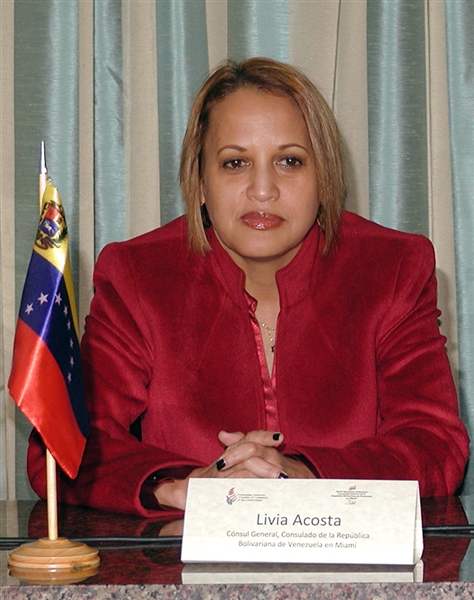 MIAMI — The United States has ordered the expulsion
of Venezuela’s consul general in Miami after allegations surfaced that
she discussed possible cyber-attacks on U.S. soil while she was
stationed at her country’s embassy in Mexico.

The State Department said it declared the diplomat,
Livia Acosta Noguera, persona non grata and had given her until Tuesday
to leave the country.

Her expulsion had been disclosed hours earlier by
Roger Noriega, a former U.S. undersecretary of state for the Western
Hemisphere, through his Twitter account.

The decision to expel Acosta was made a month after
Spanish-language Univision Network broadcast a documentary about Iran’s
alleged terrorist activities in Latin America, including a segment in
which the consul apparently asks an alleged Mexican cyber-pirate to give
her the access codes to nuclear facilities in the United States.

On the program, the alleged cyber-pirate says he
provided the secret codes and the location of each of the U.S. nuclear
plants to Iran, and a voice attributed to Acosta is heard to say: “You
should also give me that … to send it to the president, or rather the
chief of defense; the chief of presidential security is my friend.”

The recording was apparently made when Acosta worked
as cultural attache at the Venezuelan embassy in Mexico, but documents
obtained by El Nuevo Herald indicate that Acosta performed other
functions there.

According to the documents, Acosta and Vice Consul
Edgard Gonzalez Belandria, who was in charge of issuing passports at the
Miami consulate, were registered in the savings bank of the Bolivarian
Intelligence Service (known by its Spanish-language acronym SEBIN),
indications that they are on that agency’s payroll.

The automated service of the savings bank, which can
be accessed by entering the user’s identity card, shows the amounts both
officials have accumulated as employees of the intelligence service.

Sources close to Venezuelan security organizations
said they had knowledge that Acosta was a member of SEBIN, and pointed
out that she did intelligence work when she was working in Mexico.

Press reports published in Venezuela indicate that
Acosta might have left the U.S. in late December, but there are no
indications whether she later returned to Miami. Acosta’s whereabouts
were unknown. The Venezuelan consulate was closed on Sunday..

Venezuela’s embassy in Washington said any statement about Acosta’s expulsion would come from Caracas.

Venezuela’s ministry of communication did not respond
to interview requests, and President Hugo Chavez did not bring up the
matter during his Sunday television program.

Chavez said he would meet with Ahmadinejad on
Monday. The two men are scheduled to be in Nicaragua on Tuesday to
attend the inauguration of President Daniel Ortega.

“This tour of tyrants by Ahmadinejad is the most
recent example of the expansion of Iranian influence in Latin America,”
said Rep. Ileana Ros-Lehtinen, R-Fla., who chairs the House Foreign
Affairs Committee.

Representatives of the Venezuelan community in Miami
urged the State Department to expand its investigation into the dealings
of other Chavez consular staff in the United States.

“We ask that they deepen their investigation into
consular officials who remain and represent a threat to U.S. security
and its residents. They will continue the actions developed by Livia
Acosta on U.S. soil,” the Organization of Politically Persecuted
Venezuelans in Exile said in a written statement.

Ros-Lehtinen said the expulsion of the Venezuelan diplomat is on her agenda.

“Our Foreign Affairs Committee held hearings and
briefings on this important issue, in which members of Congress from
both parties expressed great concerns,” she said. “We’re going to hold
another special hearing at the end of the month to assess what specific
actions the (Obama) administration is taking to confront this serious
threat.”

Noriega, the former State Department official, said
in an interview recently that two high-ranking U.S. diplomats held a
“cordial meeting” with Venezuela’s high representative in Washington,
Angelo Rivero, to give him assurances that, despite the Venezuelan
consul’s scandal, the State Department looks forward to improve
cooperation with the South American country.

“Our sources in Venezuela affirm that the highest
ranking (U.S.) diplomat in charge of Venezuela seemed to be more
concerned about the security of the consul in Miami than any potential
harm to the U.S. security,” Noriega said.

Visit The Miami Herald at www.miamiherald.com