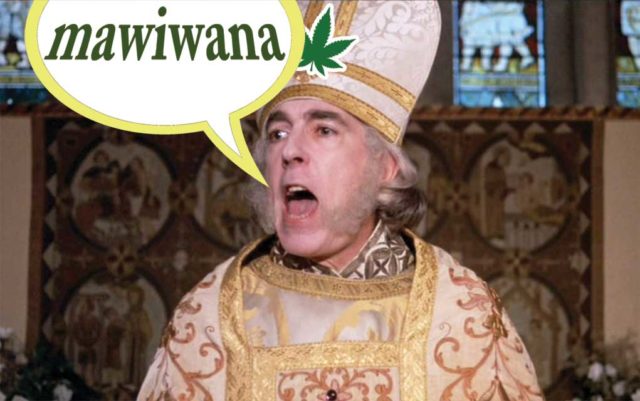 When is a sin no longer a sin? Apparently when it becomes a profitable investment.

The Church of England, the biggest religious organization in Beatles Country aka Great Britain, has apparently seen the light.

The church, which most of us know from those big hats worn by its clergy — think “Marwidge” in The Princess Bride — has decided it’s time to reverse its opposition to pot… or, at least, medicinal weed.

In recent days, the commissioners who manage the church’s $10.4 billion in assets — yes that is a “b” not “m” in front of “illion” — have decided it’s suddenly all right to invest in companies that sell medical marijuana.

Edward Mason, the Church of England’s chief of responsible investment, told the Financial Times, “We make a distinction between recreational cannabis and medicinal cannabis. We are content with it being used for proper medicinal purposes.”

The church has long been opposed to marijuana use, and considered cannabis companies immoral enough to not qualify for inclusion in its investment portfolio, which is required to only invest in what the church considers ethical and responsible companies.

The church’s website describes its investment requirements this way:

“We hold a diversified portfolio of investments across a broad range of asset classes, consistent with our ethical guidelines. We are committed to responsible investment. We think that taking account of environmental, social and governance issues in our investment decisions is an intrinsic part of being a good long-term investor. We are also committed to engagement with the companies we invest in, and have an in-house team dedicated to this task.”

“Responsible and ethical” seems to be a bit of a moving target for the church’s money managers. For now, according to FT, the church’s policies will allow it to invest in companies that make money from medical marijuana but not companies that make money from adult-use pot (read: recreational). But even this distinction gets hazy when it comes to profiteering on its investments. Under its new ethical guidelines, the church is allowed to invest in a company making money from adult-use weed so long as no more than 10 percent of its overall profits come from such a sinful endeavor.

Can’t you just picture a bunch of investment angels floating on a fluffy white cloud straining to come up with just the right amount of sin a company can commit and still be considered investable? Good and evil have gotten so complicated in the hedge fund era.

All kidding aside, what the Church of England is doing is a positive thing. They are acknowledging that marijuana — or as The Princess Bride priest would call it, “mawiwana” (so much for all kidding aside) — has many important medical uses and any industry that is supporting, researching and promoting those uses is worth church support. It would be nice if this massive and influential church would also scrap its 10 percent hypocrisy on recreational weed and just embrace people’s right to recreate responsibly. And it would make life easier for the investment angels as well.