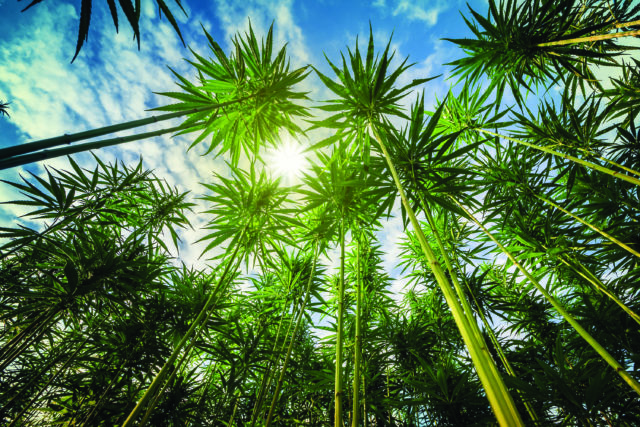 It’s 2020, and I want you to take a moment to imagine a world where Donald Trump isn’t president, health care is universal and bee populations are no longer in decline.

Dream big my friends, because it’s all possible — in some cases with a little help from hemp.

With bee populations in decline in North America, Europe and Asia, research like this is nothing to sneeze at: it can inform bee-friendly agricultural practices.

The Cornell team collected bees at 11 hemp farms in central New York in the summer of 2018. Their findings, published in Environmental Entomology, show that hemp plants at least 2 meters (6.6 feet) tall attract “nearly 17 times the number of [bee] visits compared to short plants.”

Hemp’s made quite an impression on the U.S. agricultural scene since the 2018 Farm Bill took the non-psychoactive form of cannabis off of the controlled-substances drug classification and allowed all U.S. farmers to legally produce the crop for the first time since 1937 (when the Marihuana Tax Act was passed).

But some states, like Colorado, got a head start. In 2014, then-U.S. congressman Jared Polis introduced and advanced an amendment to that year’s Farm Bill that allowed for hemp-growing pilot programs.

Now with five years of hemp production under its belt, Colorado leads the nation in production, with more than 21,000 acres planted and 828 cultivation licenses issued, according to a September report by New Frontier Data.

There’s been a huge boom in hemp production because of increased demand for CBD across the country, and that trend is projected to continue.

“As cultivation of hemp increases,” the Cornell researchers write, “growers, land managers, and policy makers should consider its value in supporting bee communities and take its attractiveness to bees into account when developing pest management strategies.”

According to an article for the University of Nebraska Lincoln Institute of Agriculture and Natural Resources, “Varieties of hemp, whose stems are used for fiber, bio-fuel, or other products, grow to 6-7 feet in height, providing the desired long fibers for industrial processing.” So these varieties might be best when considering bee populations.

Hemp may seem a bit of an odd choice for bees, since hemp doesn’t present the vivid colors and tantalizing scents that typically woo our honey-making pals. But hemp produces a lot of pollen, which provides essential protein for bees, and hemp produces pollen during a time of year when there’s not a lot, making hemp an important food source for bees during lean times.

The Cornell team believes that tall hemp could be crucial to stemming declining bee populations.

No word yet on tall hemp’s affect on Donald Trump’s presidency.