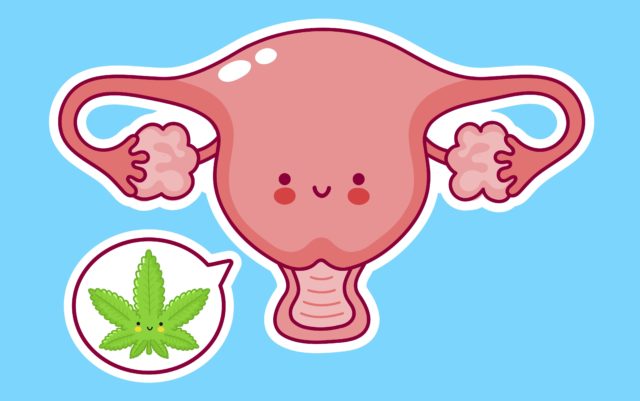 Diana Roopchand wanted part of her research program at Rutgers University to be focused on a topic specific to women’s health, so she chose menopause, a drop in estrogen that causes women in their late-40s to early-50s to experience symptoms like hot-flashes, night sweats, anxiety, brain fog, weight gain and bone loss.

“If symptoms [of menopause] are not well-managed, productivity and quality of life can be severely affected,” which can affect long-term disease risk, Roopchand says.

With life expectancy growing, almost all women will experience estrogen deficiency and menopause, Roopchand reasoned. That meant half of the world’s population (roughly 3.875 billion people) stood to benefit if she could ease that midlife metamorphosis.

Roopchand found that CBD was being marketed to women as a treatment substance for menopause and post-menopause symptoms. But (as is so often the case with CBD and cannabis at-large) there was no peer-reviewed research to back up those claims.

“The field was wide open, and as an assistant professor I had start-up funds from the university to equip my laboratory and pursue new lines of research,” she says. It was the “perfect opportunity” for Roopchand’s team to evaluate CBD’s effectiveness at treating menopausal symptoms.

Roopchand is a biochemist, immunologist and microbiologist . Her research focuses on interactions between plant phytochemicals and people to determine the causes behind health benefits, and then translating that into human interventions — which made this particular topic, concerning CBD and the symptoms of menopause, particularly suited to her research skills.

She and her team of researchers gave one half of a group of 14-week-old mice CBD-laced peanut butter balls, while the other half (the control group) received regular peanut butter balls. That regiment continued for 18 weeks, at which point the mice were euthanized and dissected: their liver and uterus were weighed, their ilium and colon segments were removed and flushed with sterile solution, and their carcasses were stored for bone sampling.

On average, women in the U.S. enter menopause at age 51, according to Rutgers — meaning most women spend over a third of their lives in an estrogen-deficient state. According to Roopchand, a lot of emerging evidence indicates there’s a significant amount of “cross talk” between endocannabinoid systems and estrogen-regulated systems.

“CBD can interact with many receptors throughout the body, and there is data reporting its anti-inflammatory effects and protective effects on bone, gut and cognitive health,” she says. “Our working hypothesis was that CBD would alter the gut microbiota and microbial metabolites, leading to reduced inflammation and improved metabolic health outcomes. We thought CBD would alter the community of bacteria in the intestines.”

The scientists took x-rays and measured bone density in the mice. They also measured RNA from their iliums and colons, analyzed serum taken from blood samples, and closely examined gut microbiota.

“I was somewhat skeptical and not entirely expecting to see all the effects we observed,” Roopchand admits.

As a preclinical trial, Roopchand’s study, published in Frontiers of Pharmacology, doesn’t prove anything — not yet, at least. It will take peer-reivewed full clinical studies on menopausal/postmenopausal women to show that CBD can ease symptoms of estrogen deficiency.

“We need more research on [the] efficacy and safety of hemp-derived products. CBD is just one of many other phytocannabinoids that have yet to be studied with respect to their usefulness for management of menopause-related issues,” Roopchand says. “In the meantime, women will likely continue to experiment on their own.”