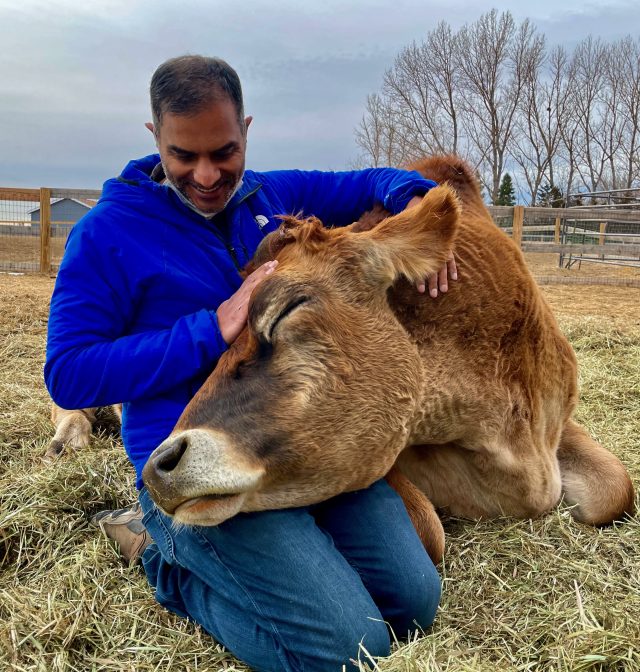 Anyone who has ever visited Luvin Arms Animal Sanctuary knows Tito the rescued cow. His bubbly, affectionate personality touches everyone who meets him.

When baby Tito arrived at Luvin Arms in 2017, he was extremely weak and malnourished. Tito came from the dairy industry where he was deprived of his mother’s lifesaving milk.

The Luvin Arms’ team doted on Tito. From bottle feeding to spending nights with him in the barn, the team cared for Tito around the clock. While Tito was in quarantine during this early phase at the sanctuary, he was never alone.

Each day, he grew stronger and stronger, both emotionally and physically.

As Tito got healthier and more curious about his new home, his trust in humans grew along with his naturally playful personality. Because he was so young when he came to Luvin Arms, Tito imprinted on humans. Although sanctuary staff loved this, they knew he would eventually need to integrate into the existing cow herd in order to have whole social and emotional health.

Tito needed a cow mentor. That’s where Leroy Brown came in! Tito learned how to be a cow from Leroy and the entire cow herd. And in turn, Tito taught his new cow family how to trust humans.

Tragically, Leroy Brown passed away suddenly in early 2021. Sanctuary staff were all heartbroken, but none more than Tito. Their connection was so profound. Tito didn’t leave the barn for months after Leroy’s death. It took Tito time to heal from the loss of his friend.

At the end of 2021, a young rescued cow entered all of our lives. The first time he saw Lucky upclose, Tito literally broke the fence trying to get to him. These kindred spirits connected immediately, and are now forever friends. Tito’s need for deep connection and belonging was once again answered by another beautiful sentient being.

Today, Tito still loves hanging out with his human family just as much as his cow family. He is a Superstar Animal Ambassador for his species, participating in anctuary tours, sharing his story about surviving the dairy industry, giving the best cow hugs in town, and gladly accepting butt scratches in return.

If you’re interested in sponsoring Tito, email Missy@LuvinArms.org or visit luvinarms.org/residents/rescued-cows/tito. And don’t forget to schedule a tour to meet him in person!

Critter Classifieds is a column where you can meet furry, feathered and four-legged friends who need your love and support. Boulder Weekly is currently working with two animal welfare agencies — Longmont Humane Society and Luvin Arms Animal Sanctuary — to feature critters who need your support. We hope to bring other organizations on board in the future.

If your nonprofit organization has volunteer needs and is interested in a similar column, reach out to us: editorial@boulderweekly.com