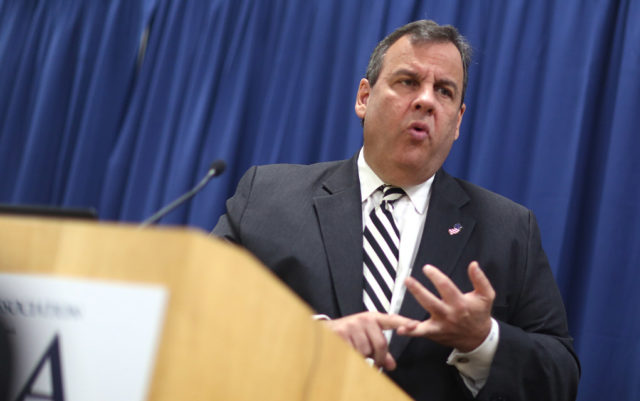 There he goes again.

A couple weeks ago, New Jersey Governor Chris Christie was speaking at a forum on substance abuse hosted by the New Jersey Hospital Association in Princeton when the subject of marijuana legalization came up.

The mere mention of the subject causes Christie’s head to explode, and right on cue, it did.

“This is beyond stupidity,” he said of legalization. “We are in the midst of the public health crisis on opiates. But people are saying pot’s OK. This is nothing more than crazy liberals who want to say everything’s OK.

“People like Nick Scutari and Steve Sweeney and Phil Murphy (New Jersey pols who favor legalization) want to bring this poison, legalized, into this state under the premise that, well, it doesn’t matter because people can buy it illegally anyway,” Christie continued. “Then why not legalize heroin? I mean, their argument fails just on that basis. Let’s legalize cocaine. Let’s legalize angel dust. Let’s legalize all of it. What’s the difference?”

Good point there, governor. And while we’re at it, let’s legalize alcohol, which, like heroin, cocaine, and angel dust — and unlike marijuana — is a substance several thousand people a year fatally overdose on. And, also unlike marijuana, those substances are physiologically addictive, and figure in an enormous amount of violent behavior.

Oh, come to think of it, we did legalize alcohol, or re-legalize alcohol after we banned it for 12 years. We re-legalized it because prohibition’s consequences turned out to be more onerous than alcohol’s. Among those consequences was the rise of organized crime, a point Christie seems to keep overlooking. Maybe the Mob never made it to New Jersey.

For instance, if you were to slap a skull and cross-bones on soft drinks and label them poisons (as some of Boulder’s more unhinged nanny-statists and food cranks probably would like to do, you’d take a big step toward conflating them with, say, paint thinner, which makes people regard the warnings on things like paint-thinner more casually.

It’s the same with drugs. When guys like Christie call marijuana a poison and conflate it with heroin and methamphetamines, they devalue their warnings about the hard drugs, which really are dangerous.

And in the case of marijuana, the devaluation will be almost instantaneous. That’s because over half of American adults have tried marijuana at least once in their lives, and most have concluded from first-hand experience that when it comes to pot, Christie doesn’t know what he’s talking about.

Christie’s attitudes on pot really matter if the Trump administration is serious about fighting opioid abuse. That’s because Trump appointed him to chair a committee to come up with a strategy for fighting the opioid epidemic. If Christie doesn’t know the difference between marijuana and opioids, any strategy he comes up with will be ludicrously delusional.

When it comes to marijuana, for Christie, “beyond stupid” is an inspirational state. The guy’s still stuck on stupid after all these years.

He’s stuck on stupid politically too. Christie’s attitude toward marijuana legalization in New Jersey is “over my dead body.”

“You’re damned right I’m the only impediment [to legalizing marijuana in New Jersey],” he recently crowed. “And I am going to remain the only impediment until January of 2018.” Pro-legalization law-makers are planning to run a legalization bill in the state legislature in 2018 as soon as he leaves the building. (New Jersey’s gubernatorial and legislative elections will take place in November 2017.

A statewide poll found 58 percent of New Jerseyans support replacing prohibition with regulation — and that’s according to a poll taken in 2015. It’s almost certainly higher today. More recent polling puts Christie’s approval ratings at around 20 percent. The Marijuana Policy Project says polling suggests he’s “out of touch with his constituents.” And how.