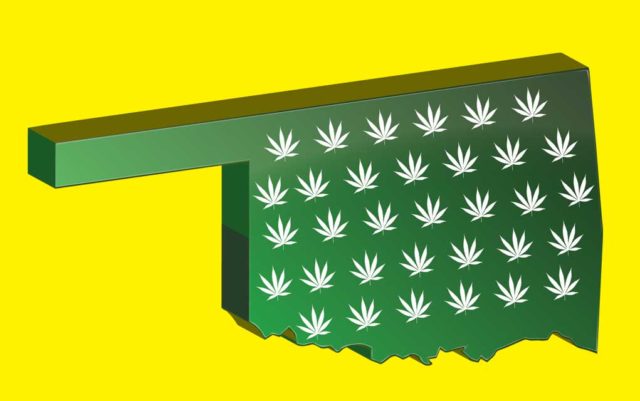 Five weeks ago, Oklahoma voters passed a medical marijuana ballot initiative by a 122,000-vote margin. The initiative was cast as a state law instead of a constitutional amendment, which meant the legislature and the state health department could screw around with it — which the Oklahoma Department of Health immediately did.

The Department of Health swiftly adopted implementation rules that were designed to make it nearly impossible for medical marijuana dispensaries to operate in Oklahoma or for prospective patients to use them. Among other things, the regs banned the sale of smokable marijuana, required a licensed pharmacist to be in every dispensary, and required female patients to get a pregnancy test before they could buy marijuana.

The ban on the sale of smokable pot and the pharmacist requirement were adopted at an emergency meeting and approved by the board despite its own attorney advising against doing so. Governor Mary Fallin signed off on them the following day.

Two separate groups sued the board, and Oklahoma Attorney General Mike Hunter said the board overstepped its authority and recommended it make several changes.

Meanwhile, Green the Vote, the group that had petitioned the medical initiative onto the ballot, started circulating two new initiative petitions, both as constitutional amendments this time, which couldn’t be changed by the state’s elected and appointed officials. The first would write medical marijuana legalization into the state constitution. The second was a state constitutional amendment to legalize recreational marijuana.

Both attracted huge surges of support, with the recreational initiative actually running ahead of the medical one. To get on the November ballot, each initiative needs about 124,000 valid signatures, and the petitions have to be turned in by Aug. 8.

Last Sunday, Green the Vote announced it had 132,527 signatures on the recreational marijuana petition,and that it would keep seeking signers up until the Aug. 8 deadline. It wants to turn in 150,000 signatures to ensure they have enough valid ones.

Chances are that even if the petition has enough valid names on it, which it probably will, it won’t be on the November ballot. That’s because it will likely take about 60 days for it to go through the approval process for initiative petitions required by state law, according to Oklahoma Secretary of State James Williamson. More about that in a moment.

Whatever the ultimate fate of the recreational initiative, it appears it has already had one positive effect: the popular backlash it represents (along with the lawsuits) is causing the Department of Health to beat a hasty retreat.

Last Friday the Department released new proposed medical marijuana rules that remove some of the more onerous provisions in the old ones, including the ban on the sale of smokable pot, the rule requiring prospective female patients “of childbearing age” to get a pregnancy test, the requirement that dispensaries have a pharmacist on the staff, a limit on the THC content of the products the dispensaries sold, and more than a dozen other regs.

The board was scheduled to vote on the revisions at a special meeting yesterday (Aug. 1). Just guessing, but chances are the revisions will pass.

But that won’t change the fact that the board’s pig-headedness launched a recreational marijuana initiative that has a good chance of getting on the Oklahoma ballot — sooner or later.

If the recreational initiative has enough signatures, but can’t be processed in time for the November election, the call for when it will be voted on would likely be made by Governor Fallin. The choices would be putting it on the ballot in 2020 or holding a special election.

Governor Fallin had to make a similar decision on the original medical marijuana initiative. She opted for a special election on June 26, which some observers thought was done to keep turnout down and give opponents a better chance of defeating it. It won with 57 percent of the vote.

She might opt for a special election on the recreational initiative as well, not so much in the hope of defeating it, but to keep it off the 2020 ballot, where it could boost the turnout of young, progressive voters.

Oklahoma is one of the most socially conservative states in the country. The fact that marijuana legalization is roiling its politics shows how swiftly politics of marijuana are evolving. Even in a state like Oklahoma (where “evolve” is still a very bad word in some quarters).