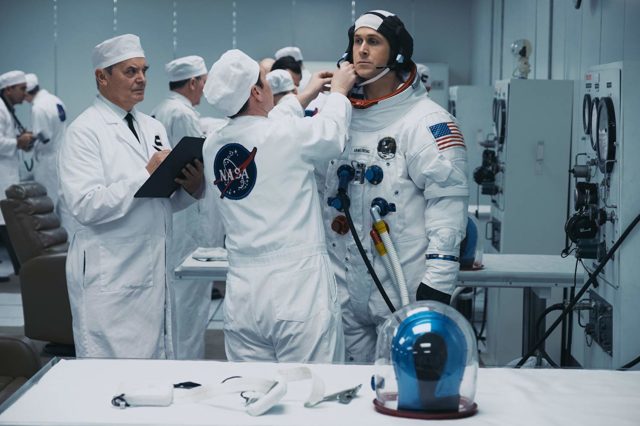 Obviously, the most exciting part of retelling humanity’s mad dash to set foot on the moon is Ryan Gosling quietly rage blinking. First Man is sizzling history told ice cold, a stuffy biopic that dreams itself an arthouse meditation when it actually just traffics in snoozy cliches. Having also penned The Post and Spotlight, screenwriter Josh Singer has now completed his unofficial “trilogy of movies about essential cultural moments told with as little vim and vigor as can be vimmed or vigored.”

Director Damien Chazelle’s follow-up to La La Land is too tepid to call an outright misfire, but he won’t have to worry about anyone pulling another “Lucy and Charlie Brown playing football” moment on him at the Oscars this year.

Ryan Gosling plays Neil Armstrong, the astronaut chosen to be the first person to walk on the moon. It cannot be understated that part of the reason Armstrong was chosen for the role was his even-keeled demeanor and outwardly boring persona, two characteristics that don’t inherently scream “dedicate a movie to my inner strife!”

Starting in the early 1960s and continuing until his fateful “small step/giant leap,” First Man spends considerably more time watching Neil pensively pout in the vicinity of his wife, Janet (Claire Foy), than it does building tension about the America-versus-Russia moon contest.

The reductive and gross “virgin/whore” dichotomy that dominates most roles for women should really be updated to “virgin/whore/anguished-wife-who-worries-about-her-husband-doing-dangerous-things.” Foy does her captivatingly understated damndedst, but you don’t get more paint-by-numbers than scenes of her demanding that Neil talk to their kids or scenes where she weeps while listening to a radio account of a test flight. Does a movie pass the Bechtel test if two women talk to each other without explicitly mentioning a man’s name but both characters are clearly only thinking about dudes? Asking for 51 percent of society…

For his part, as a grade-A emotional simmerer, Gosling can drop bombs of suburban ennui with the best of them. As potent as sparse and intimate storytelling can be, there is a limit on how long one can watch any performer silently stare in close ups before actively rooting for a spaceship to blow up. Even those moments — when the raw danger of NASA trying to pull a lunar McGyver is palpable — are often muddled by shaky-cam and incomprehensible lighting and framing. Chazelle clearly meant to simulate the real-life tension and confusion experienced by the astronauts but actually just made watching his movie often unpleasant.

First Man is substantially worse than its grade here indicates because films shouldn’t be graded on what they could have been. Still, just imagine how transcendent a movie about overcoming political obstacles to celebrate our shared humanity and recapture a sense of purpose and wonder might have felt right about now.